Here’s the latest scoop from the hard-working folks at Upper Deck Authenticated (UDA), Upper Deck’s highly touted memorabilia division: Today marks the release of a never-before-seen Tegata inked handprint of longtime company spokesman Michael Jordan. A traditional form of Japanese memorabilia that is reserved for only the most supreme athletes, Jordan is the first of UDA’s impressive lineup of exclusive athletes to have a Tegata piece produced of him. The extremely rare keepsake is limited to just 23, which corresponds nicely to MJ’s uniform number during his playing days with the Chicago Bulls. 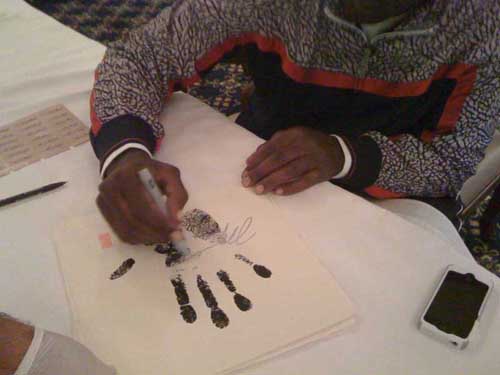 OFFICIAL: Jordan signed his name in silver after inking his hand and stamping it.

Here’s the skinny direct from Steve Sloan, director of UDA: “Tegata is a highly respected form of recognition for Japan’s best sumo wrestlers, so we’ve decided to create a variation of this coveted show of admiration for one of our best-selling athletes of all time, Michael Jordan.” Makes perfect sense, right?

Jordan, a six-time NBA champion with the Bulls who was inducted into the Hall of Fame in 2009, is now the very first stateside player ever to be honored with a unique ‘Tegata’ memorabilia piece from UDA. Utilizing handmade Japanese Fuji paper, Jordan has inked his left hand in black and included an authentic Inkan stamp which corresponds perfectly with the traditional craft. The overall keepsake, which measures 30” wide by 40” high, includes a 12” by 12” inset center upon which Jordan’s hand is inked and is surrounded by a double-matted mosaic background of on-court, action images of MJ throughout his 13-year tenure with the Bulls. 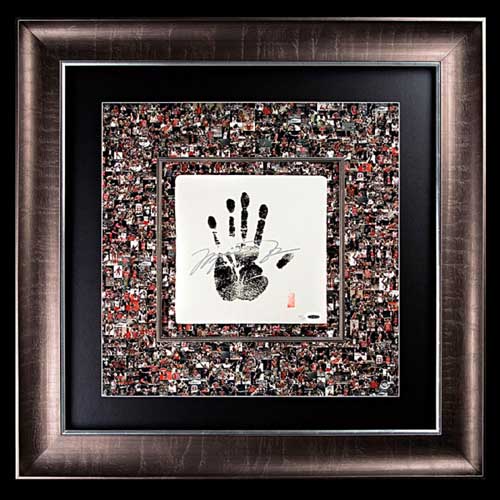 WOW: Only one word can describe this incredible keepsake from the folks at UDA.

Jordan recently performed the Tegata process alongside UDA officials and helped in the actual hand-crafting of 23 uniquely authentic stamps for each keepsake. His unique, red Inkan stamp reflects his initials and uniform number. He then completed the autograph phase of UDA’s patented five-step authentication process by signing his name in silver across each handprint. Check out this video to see Jordan inking and signing the exclusive Tegata.

“It’s an honor to be the first Upper Deck Authenticated spokesmen to be selected to go through this process,” said Jordan, who celebrates his 48th birthday tomorrow.


Cool idea, but why have MJ sign a black handprint with a silver pen? I would rather have teh signature stand out, than be hidden on a white surface… BECKETT & SCF ID: JPLEAZME


novel idea!!! unfortunatlly only the japanese colectors will be able to afford these


I agree that the silver signature may have been the wrong way to go, but it’s still a sweet piece. And yes, “Wow” def works!!!