Collector of the Month – Jeffrey Griffith

Each month Upper Deck spotlights one of its valued collectors to showcase their collection. The great thing about sports collectors is that they are all very different in what they collect, how they collect their items, and what they do once they have them. If you do anything around hockey trading cards, you likely know Jeffrey Griffith. There are people you see frequently at shows that you steer clear of and those who you are drawn to. Jeffrey is one of those who you are drawn to. He has a great energy and a tremendous amount of passion for hockey. Oh, and he has a collection of Wayne Gretzky cards that will knock your socks off.

I have been interested in featuring Jeffrey on the blog for awhile now, but as you’ll see, he’s much more than just a collector. I wasn’t sure the best way to share his collecting accomplishments so I decided it would probably be best if we just did a question and answer piece. I hope you enjoy his story as much as I did. Jeffrey is without a doubt one of the best people you’ll meet in the industry and to make things even more exciting, today is his birthday. Happy birthday, Jeffrey!

Question: When did you develop an interest in hockey?

Jeffrey Griffith: “It was during the strike-shortened 1994-95 season, as that was the first year that we got tickets for the then-Mighty Ducks of Anaheim. I enjoy going to Anaheim Ducks games, and the Stanley Cup victory at home in 2007 is the highlight of my experience at games. The best is when they skate against their cross-town rival, the Los Angeles Kings. Up until the trade deadline of the 1995-96 season that meant that I had the opportunity to see Wayne Gretzky play at the then-Arrowhead Pond [now Honda Center] a few times each year.”

Question: When did you decide you wanted to collect hockey?

Jeffrey Griffith: “I started buying retail packs at about the same time I began watching live hockey games. One of the earliest Upper Deck releases that I recall specifically focusing on was the 1996-97 Upper Deck set, in part because it had one of the first cards to feature Wayne Gretzky in a New York Rangers uniform.” 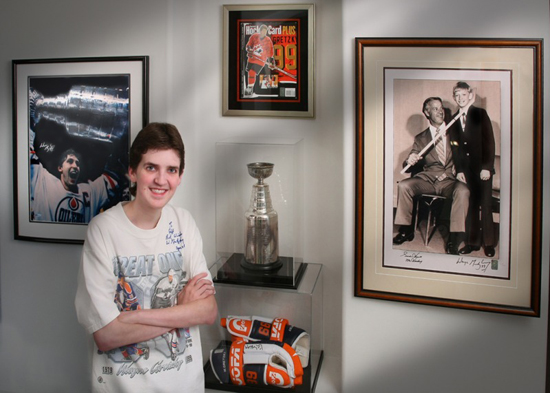 Jeffrey stands in front of some of his prized Gretzky memorabilia

Question: What made you want to collect Wayne Gretzky?

Jeffrey Griffith: “As a gift, I received a signed Wayne Gretzky puck. I knew that I had several cards of him already, so I decided to put them together into a collection. As I began to understand hockey better, I began to recognize how significant Wayne Gretzky has been for the game, especially for the creation of a second team in southern California.”

Question: Were you concerned that with so many collectors chasing cards of “The Great One,” you’d often be facing an uphill battle in getting the cards you were really after?

Jeffrey Griffith: “At the beginning of my collecting career, I was not concerned with this being an uphill battle because I was collecting simply for the sake of collecting. This was before eBay and other internet message boards such as Hobby Insider became an integral part of the hobby, so everyone was not as connected as we are today. However, I quickly became aware of larger collections of Gretzky, but I was more in awe of them rather than being envious. I hoped, however, that one day my collection could be as complete as these other collectors’ collections.”

Question: What are some of your favorite Upper Deck Wayne Gretzky cards in your collection?

Jeffrey Griffith: “One of my favorite cards in my collection is the 1999-00 Ultimate Victory Legendary Fabrics Autograph card, which is the only card to feature swatches of jersey and autographs from both Wayne Gretzky and Bobby Orr. My other favorites include some of the very first Wayne Gretzky and Gordie Howe cards. Some of my most unique cards include five of the first eight NHL Shield cards from 2002-03 Premier Collection until 2004-05 Ultimate Collection, including the first two Dual Shield cards that Gretzky was featured on in Ultimate Collection.” 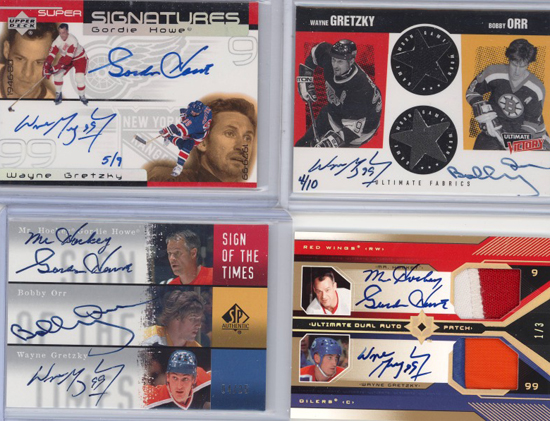 Question: Obviously in this industry people talk. Did you get recognized when you were picking up the latest Gretzky cards?

Jeffrey Griffith: “After my first article in Beckett Hockey Plus in 2004, I began to get recognized even more at the Toronto Sport Card Expo shows. I thoroughly enjoy talking about my collection, the hockey card industry, and hockey history with people, and I am always available to share, answer, discuss, and/or debate at shows, online forums such as Hobby Insider, and Twitter [@gretzkycards].”

Question: Did you ever have circumstances where people tried to gouge you on prices because they knew how bad you needed certain cards for your set?

Jeffrey Griffith: “There will always be dealers who love their cards a little too much, which often results in exorbitant pricing. I learned very quickly to be content with what I have, so a simple ‘no thank you’ is easy to say when the price is too high for what I want to pay. If that statement corrects the market, great, but if it does not, I do not worry about passing on the card and move on. I find that these types of dealers are somewhat rare, and that most people are very easy to work with, which results in both the collector and dealer being happy with the transaction.”

Question: We know it’s not all bad out there; do you have people that look out for cards for you and try to help?

Jeffrey Griffith: “This is one of the highlights of being in the hockey card community. Often on Hobby Insider, I will get messages from people alerting me of significant cards that are in their area that may not be online. It is great to know that when many people come across a rare Gretzky card, that I come to mind. In order to reciprocate this kindness, I learn what others collect and keep an eye out for them in case I come across one of their needs.”

Question: I believe you’ve crossed paths with Wayne on occasion. What was that like and do you think he realizes how big your collection is?

Jeffrey Griffith: “I have been able to meet Mr. Gretzky on a few occasions. The greatest meeting, however, came on October 3, 2008, when I was able to meet him and present him with a few copies of my book. This event occurred before an Anaheim Ducks and Phoenix Coyotes preseason game, and he was very gracious. When he got to the section of Upper Deck cards, he took extra time looking at each page, and even shared how the process works when he signs cards for the company. He also signed a book for me, as well as signed the cover art for the book, which was drawn by Paul Madden. He seemed truly impressed with not only the amount of cards that I have, but the amount of cards that have been issued throughout the years. The meeting was one of the greatest highlights of the entire process, and I am glad that I had the opportunity to share my collection with Wayne Gretzky himself.” 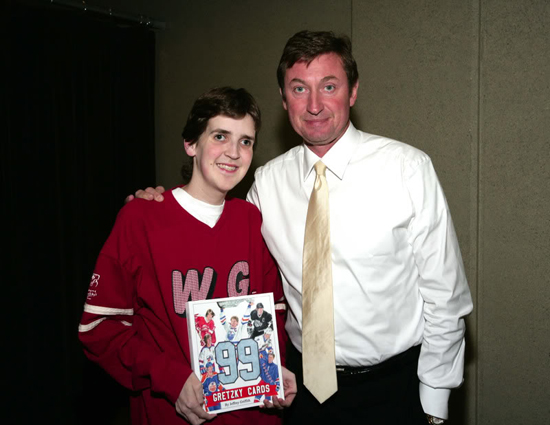 Jeffrey and the Great One have met a few times

Question: Where did the idea of writing a book come along?

Jeffrey Griffith: “Over time, I began to put together interesting facts regarding specific Wayne Gretzky cards. My dad actually recommended that I expand it further by including information about every Gretzky card issued. With that type of idea and encouragement, I worked over the next couple of years putting together the book in order to make sure that it was as complete as possible.” 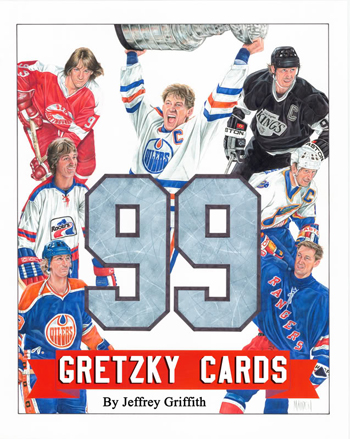 Question: What were the biggest challenges in putting that together?

Jeffrey Griffith: “The biggest challenge of the book was organizing the massive amount of information regarding Wayne Gretzky cards. Since there are more than 6,000 different Gretzky cards issued throughout the years [which includes over 700 different 1/1s], it took considerable time to confirm that every card was included in both the text and the checklists. Of the 305 pages in the book, just over 100 of them are dedicated to some form of a checklist. Narrowing down which cards should be scanned and included in the book was also a challenge, but since only 750 of my over 5,200 different Gretzky cards were depicted, it ensured that only the best-of-the-best were shown. Even though a relative few amount of cards are depicted, every card released is described in the text of the book as well as the checklists.”

Question: How did you feel when it was all over?

Jeffrey Griffith: “Once the book was complete and I had the final product in front of me, it made me realize the enormity of Gretzky’s impact on the hockey card industry. Often as player collectors we only see the holes in our collection, but the book allowed me – and by extension the readers of the book – the chance to be able to look at the full range of Wayne Gretzky cards. Further, the book emphasized the completeness of my collection, as every card pictured in the book is from my personal collection.”

Question: What was the reaction to the book?

Jeffrey Griffith: “The book has been accepted extremely well in the collecting community. I have had several fantastic conversations with fellow collectors regarding the book, and many of the memorable moments of the semi-annual Toronto Sport Card Expo is getting the chance to talk to fellow hockey card collectors. Of course, one of the major highlights of this entire work has been depicted in a past Upper Deck Blog feature. My book has been placed in the Upper Deck Collector’s Corner in the Hockey Hall of Fame in Toronto by Curator and Keeper of the Cup Phil Pritchard. Having my work alongside some of the greatest artifacts in the history of hockey is an unthinkable honor, and the enormity of this honor is phenomenal.” 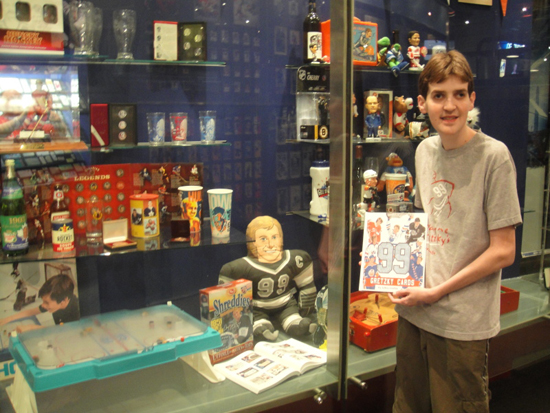 Question: Why should people go out and get it?

Jeffrey Griffith: “The book offers a very unique opportunity to see several hundred rarely seen Wayne Gretzky cards. Further, the descriptions of each card – as well as the checklists – give hockey card and Gretzky collectors a fantastic resource for their collections. I hope by having the book, collectors will appreciate the breadth of Wayne Gretzky’s cards that have often been at the forefront of the most innovative trends in the hockey card industry.”

Question: What’s next for Jeffrey Griffith?

Jeffrey Griffith: “I will continue to search for the Gretzky cards that are on my wantlist, and enjoy seeing the new Gretzky cards that are being released. Currently, I am exploring the history of the Hockey Hall of Fame through research and acquisition, and it is amazing to see Gretzky’s impact on the game and how he adds to the legacy of the other honored members of hockey. Fellow hockey fans and collectors can follow me on Twitter (@gretzkycards), which I regularly update with thoughts on current hockey events as well as the card collecting hobby.”


Well there is a #1 Hockey Fan, if I have ever seen one!! and he wrote a book. Amazing…..this guy knows his stuff!!! Great job!


Hi Jeffrey, how can I buy your book ? I would like it shipped to my place. I live in Quebec, Canada.

As i read, I might have a card fitting in your collection. Buyback Autograph 1/1 pulled here in the Czech Republic – Europe.