Thanks for Collecting the Set & Winning!

When we announced details about our Collect the Set & Win promotion, we were a little pessimistic that we may not see a winner for all the different prizes. We couldn’t have been more wrong. We had our first winner after the first weekend when a father and son team went to work on putting together the 2010-11 NHL Upper Deck Series One Retro set together. For their efforts Upper Deck sent them to the 2011 NHL Winter Classic last weekend just for completing the set. 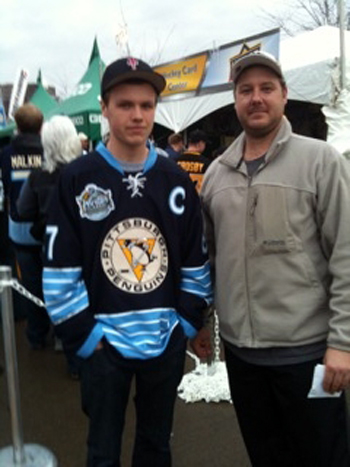 A.J. Ramsay was the first one to complete the 2010-11 NHL UD1 Retro set which got him tickets to the 2011 NHL Winter Classic courtesy of Upper Deck!

But that wasn’t the only prize. Over the weeks other collectors were able to finish the set and were able to win a variety of great prizes for their efforts. The last set just came in last week so all the prizes have now been claimed. Thank you for all of those who took part in the promotion and congratulations to the other winners:

Prizes are on their way to these winners along with their original sets. Look for more great giveaways and sweepstakes from Upper Deck soon!