LeBron Signs Only for Upper Deck

One of the cool things about working for Upper Deck is that we have a few exclusive autograph signers on board with us including the NBA’s reigning league MVP, LeBron James. Why just this past Tuesday, Jan. 11, I had the chance to meet up with LeBron in Los Angeles and watch him sign his name a few hundred times on items ranging from Miami Heat jerseys (home, away and alternate versions) and basketballs, to action prints and Nike game-worn shoes. Exhibiting the same poise he shows on the court, LeBron provided the Upper Deck Authenticated representatives with consistently solid signatures on each of the various memorabilia items that were placed in front of him. 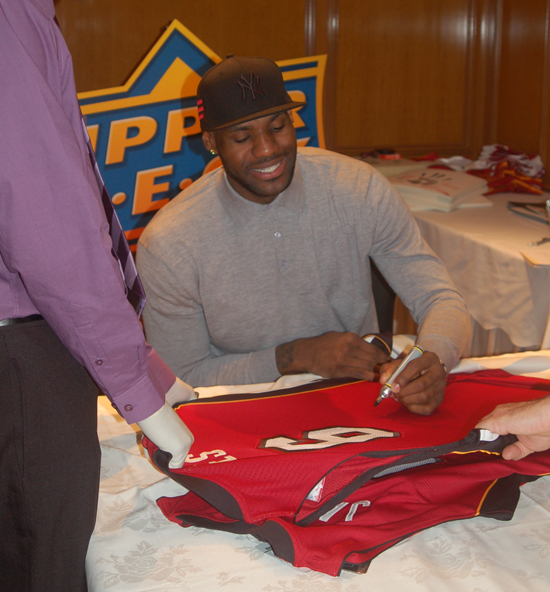 He also gave me nearly eight minutes’ worth of a video interview which we are fine-tuning right now and should have posted to the UD Blog within the week. But just to give you a glimpse of what “The King” had to say, he talked about how the Heat are starting to blend together nicely: “I think it’s coming along great,” he said. “We’re doing the things that need to be done. The process has been to just get better every day and to this point it’s been great.” He also talked about this year’s Heat establishing the best start in franchise history (30-8): “Coming into the season, we knew it was going to be a challenge,” he said. “A lot of sacrifices were made, on the court and off the court. We knew it was going to take a little bit of time for us to get to know each another on the court and once we figured that out, we knew we could play with the best of the teams and play at a high level.”

He also discussed what it’s like sharing on-court responsibilities with perennial All-Stars Dwyane Wade and Chris Bosh: “It’s not hard at all. I consider myself a pretty humble kid. I come from a pretty humble background,” he said. “The fact that you sacrifice yourself for the betterment of your team; I’ve never had a problem with that from the jump. And that’s why I decided to go to South Beach and team up with these guys.” 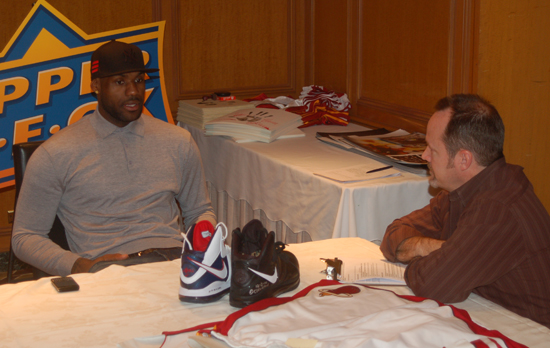 GAME-USED SHOES: LeBron was happy to talk about the shoes; just don't ask him to hold them.

One of the lighter moments of our interview came toward the end. As I asked LeBron to talk a little bit about fans’ fascination with game-used equipment, I took the opportunity to hand him the right shoe from his “Return to Cleveland” game (Zoom LeBron VIII Black/Black/White trim, above) in which he scored 38 points in a 118-90 Heat victory on Dec. 2. He obliged me momentarily by taking the shoe in hand, but quickly put it back on the table saying: “Well, I could put it down. I sweated a lot in these shoes, so I don’t particularly want to grab them.”

Stay tuned for the actual video footage coming soon. In the meantime, enjoy these images of King James signing some very cool Upper Deck Authenticated merchandise which will be available shortly at the Upper Deck Online Store. 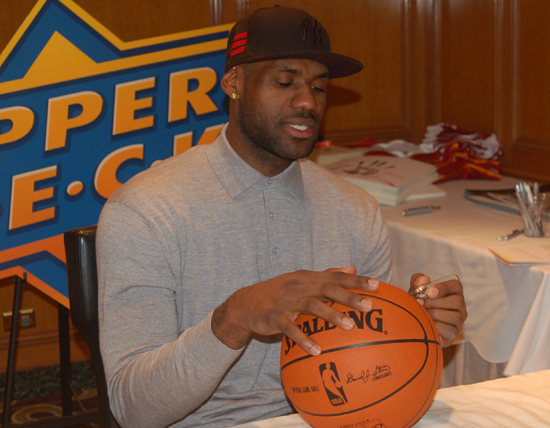 GOING LEFTY: Like his drives to the basket, LeBron has his UDA signature technique down pat.