He’s Back: Tiger Woods is Swinging Away at Torrey Pines

The 2010 calendar year was not a good one for Tiger Woods. It was the first PGA Tour campaign in which he failed to win a single tournament. While he stayed competitive in practically every tournament he competed, his bid for titles last year came up empty.

With a New Year, however, brings new chances and new opportunities. And Tiger Woods is resolved to get back on track with his links career and regain his rightful position as the world’s No. 1 golfer. As one of Upper Deck Authenticated’s exclusive signing partners, Tiger’s signature is one of the most sought-after in the collectibles marketplace. We have shared just how valuable his signature is here before. Ultimately his performances out on the course largely dictate how sought-after his signature really is.

There’s no disputing his universal appeal however. Since partnering with Tiger Woods, Upper Deck has featured him in MLB, NFL, NBA, NHL, Golf and even collegiate licensed trading card releases. Tiger is included in these sets because we’ve found there is huge demand for his trading cards, and especially autograph trading cards, from every type of sports fan. He is an athlete that truly transcends his own sport. Recently he took some time out of his bust schedule to sign his 2009-10 NHL The Cup Autographed Retro Rookie Patch cards. With a swatch of tournament-worn memorabilia embedded on each card, these are sure to be a hit once they find their way to the hands of collectors. 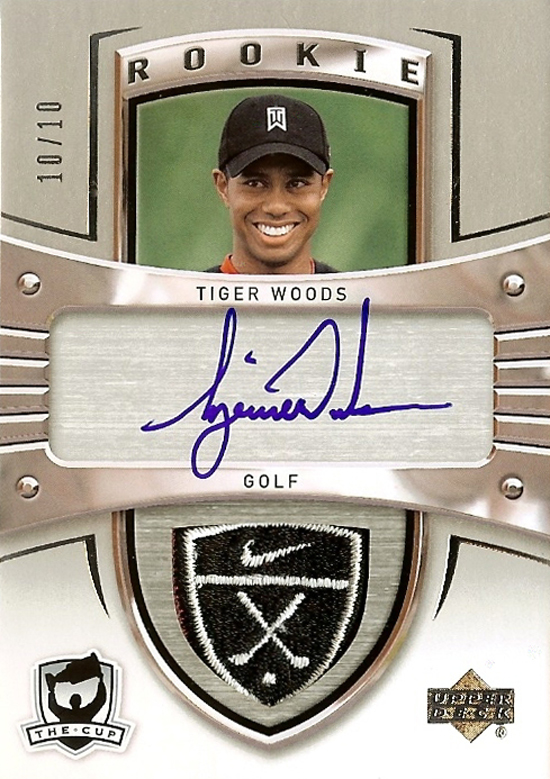 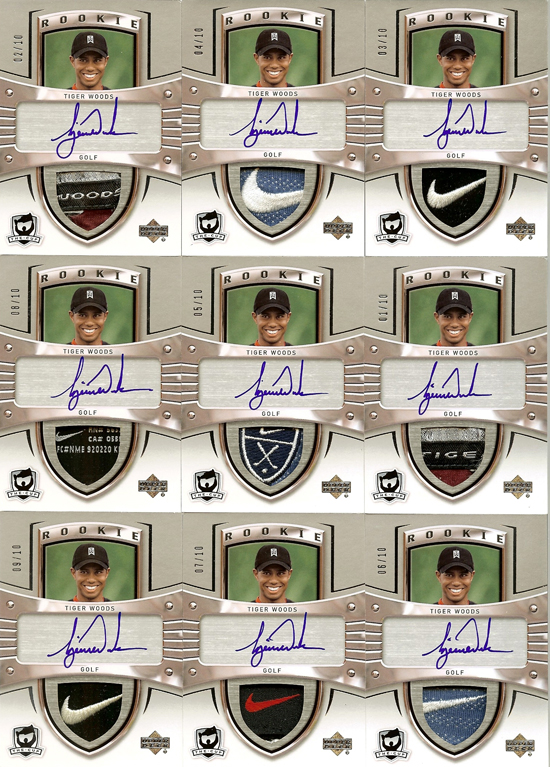 Only five of these exchange cards have been redeemed so far, which means that five more are waiting out there to be claimed.

This year – this weekend, in fact – Tiger is battling in his first tournament of the 2011 campaign: the Farmer’s Insurance Open at Torrey Pines in San Diego. In yesterday’s opening round, he shot a three-under-par 69 with three birdies and no bogies and found himself five shots off the lead. Today, highlighted by a 27-foot put on No. 5 and four straight birdies, he made the turn with a 32. Now, having completed his second round of play, he remains in contention, but finds himself trailing tournament leader Bill Haas by five strokes.

Tiger’s march back to the No. 1 spot will not be easy. But Upper Deck Authenticated will be there to commemorate his next major tournament championship. His last major triumph occurred at the 2008 U.S. Open. You may recall he battled Rocco Mediate in an exciting playoff round on Monday that decided the title. The win marked his 14th major overall, placing him just four behind Jack Nicklaus’s all-time mark of 18 majors. It’s a hallowed mark that will not be broken without complete concentration, a little luck and a lot of perseverance on the part of Tiger.

As the 35-year-old readies himself for the fast-approaching Masters in April, Upper Deck wishes Tiger all the best this weekend as he competes in our backyard. To celebrate his return, we would like to offer up five FREE 2011 Upper Deck Authenticated calendar to fans visiting this site. Just leave a comment as to why you love to watch Tiger Woods play in the comment section below and we’ll randomly award these to five fans on Monday morning. 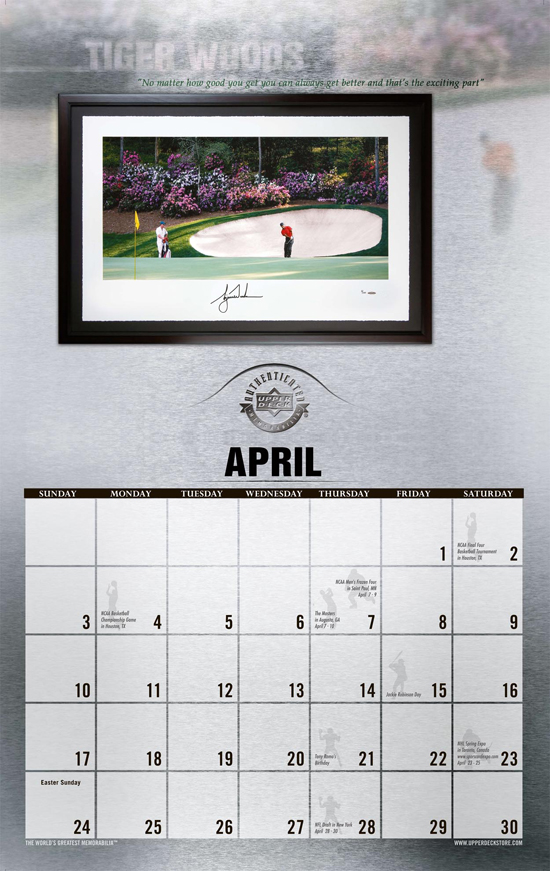 It's a new year for Tiger Woods. Leave a comment below stating why you love to watch Tiger play for your opportunity to win a FREE 2011 UDA calendar!

i do have to say that he has a very nice auto.great penmanship Tiger.

Tiger is simply amazing to watch.When he was young all the fist pumping i admit i didn’t like.But as he got older he seemed to respect the game.I think this year with all the stuff behind him he’ll come out in force.
Thanks for the opportunity to win.
Jeff

I love watching Woods cause he puts effort into every shot and putt, great golfer! 🙂

Those are some amazing cards! Tiger changed golf forever. People that never watched before suddenly were tuning in to this young phenom. I remember busting all kinds of 2001 Upper Deck golf just trying to find one of his rookie! It was one of the hottest sports products of the year!

Tiger makes things like swings, chips and putts look robotic. A power swing and then up and in the hole.

I love to watch Tiger play. He really makes it look effortless.

It’s all about the passion. He often wants it more than anyone else!

I love watching Tiger play for his crazy amazing shots that no one else can seemingly pull off.

simply put, Tiger brings excitement to an otherwise pretty boring sport. He does things out there that make you want to pick up a club and try to emulate. The only other person who had this effect on people worldwide was Jordan.

Even when he’s not contending, he’s liable to do something great.

Seeing you have 5 spares, you can send one my way please! Only way us unemployed folks can afford the CUP! Beautiful cards!

I love to watch Tiger Woods play because he influences me to be persistent in everything you do. He is a great influence and inspiration on me not only for his skill but also for him as a person. I joined the golf team at my high school to be like Tiger and I just wish I could have the opportunity to just meet him! Let alone have him sign my hat that I wear to all my practices and games! That would be a dream come true.

Tiger is the best golfer, and it’s always enjoyable to see what he does on the course, making history.

I would love to see him play golf so I can say that I have seen the very best golfer at his best. It would be like seeing Michael Jordan slam dunk or see Babe Ruth hit a home run a truly magical moment indeed!!!

The best golfer of our time, who would not love to see him play ? Has a very nice style of play and i am quite sure that he will come back into championship caliber shape sooner or later. Because champions never quit and are always competitive.

First of all, wow! Those cards look amazing!!! Wished I had anything in my collection that looks like that!! And second, who wouldn’t want to watch history everytime he steps out on the golf course. I am so glad to see him get his life back on track on and off the course.

Congratulations to Tim Yount, Anthony, JimmyD, Travis M. and Mathew Gillman on winning a new 2011 UDA Calendar. Please e-mail us your address at [email protected] so we can get that out to you.

Only makes me want to see UD come out with another golf set. No golf cards since 2005. Still think there are enough golf nuts out there to enjoy another run. Especially with the new guns — Bubba Watson, Kuchar, Dustin Johnson, Rickie Fowler to name a few==and throw in some of the LPGA newcomers in Stacy Lewis, Thompson, and Morgan Pressel.
The UD Cups are nice but how about a golf product with MJ autos thrown in??