Do Not Open Upper Deck Packs While Driving!

I picked up my lunch from a drive-thru and I was hungry, but short on time and needed to keep on rolling. The fries beckoned me first and my hand dove in and out of the bag delivering these salty slivers of happiness to my mouth while I found my way back on the freeway. With a few of the fries I even brought the catsup out and made some moves there, but nervous that I would spill on myself, I chose to finish the rest sans condiments.

Then I brought the chicken sandwich out which required me to adopt a new driving style using my knees so my hands would be free to handle the main course. Halfway through the sandwich, I heard the pitter-patter of the raised pavement markers I was hitting. I realized I was drifting into another lane and the horn blaring from the car I was about to hit helped convey that message as well. With my chicken sandwich now in my lap and my hands back on the wheel, I waved to the driver who I almost collided with who waved back, only with one finger.

I learned a valuable lesson about distracted driving and I try my hardest to keep my hands out of the bag after hitting the drive-thru nowadays. I know to use my Bluetooth if I’m on a call while driving. And my girlfriend gives me grief if I ever pick up my phone to text while driving because she saw on Oprah stories of how texting kills. Don’t get me started on Oprah’s influence over the women we love though, that’s a whole other story…

Out of all these distractive driving behaviors I’ve engaged in, there is one far more dangerous? That’s right, there are actually people who open Upper Deck packs while they drive.

If you are one of them, it will be okay, go ahead and tell your story in the comment section below, call it a confession. But just promise me you’ll never do it again.

When I first heard about this practice I quickly laughed it off, but as a few collectors shared with me how close they had come to getting in accidents, I realized it is actually a problem. And it makes sense why it would be. If you have a bunch of Upper Deck packs sitting next to you in the passenger seat and you find yourself at a red light, it’s pretty darn tempting to just bust open one pack right? But like anything, one pack turns into two and two packs turn into all the packs. You make it home sweating – with your cards stashed in the middle console, the inserts in your visor and a bunch of foil and decoys cards at your feet. 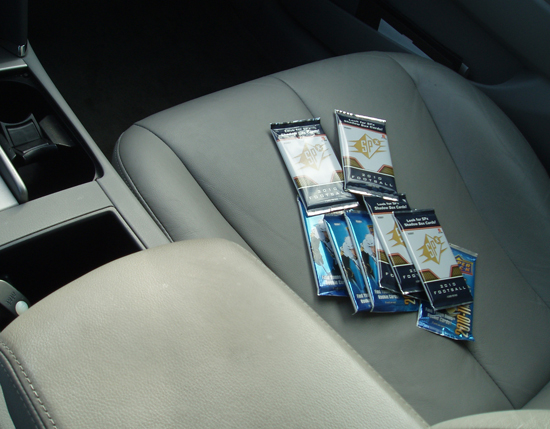 Too much temptation. When you have Upper Deck packs within hands reach while you're driving, you are looking for trouble.

We love our customers. We want you to be safe. So please, if you are traveling with packs, PUT THE CARDS IN THE TRUNK! Make sure you put your packs and boxes in a place where you can’t get to them because we all know that halfway through the drive you’ll become convinced your box is a hot box and you won’t be able to wait to get home. At the very least, PULL OVER! And most of all remember, there is nothing wrong with opening the product up at the card shop before you leave. 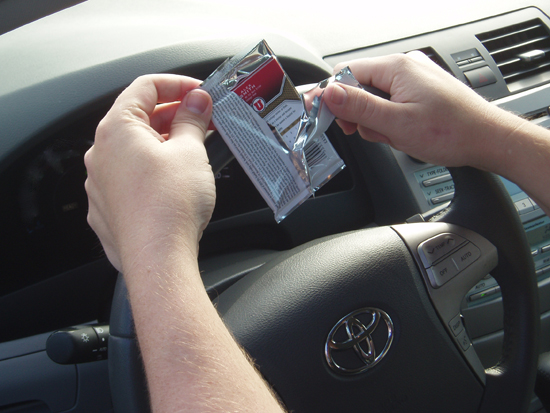 Does this look at all safe? Seriously, DO NOT BUST & DRIVE!!!

Here are just a few of the many stories I’ve heard about the dangers of opening packs while driving:

“Back in 2002 I was so excited to open four boxes of football I picked up that I started busting them while I was driving home from the shop back to my office at lunch. I was making a turn heading on a state route and while on the ramp I opened a pack that contained a Johnny Unitas autograph card. Like an idiot I tried to put it in a penny sleeve and top loader while steering and trying to maintain some semblance of control. Next thing you know I’ve driven off the road about to run into the barrels that divide the road. I was able to hit the brakes right before impact. I put the card in a top loader and then pushed all the rest of the packs and boxes to the far end of the passenger’s side where I couldn’t grab them. I haven’t done it since, but I still have that Unitas autograph.”

“Only done it a few times while driving back to work from the card shop. I think sometimes you just feel like you waited for a product so long that you just can’t wait any longer. I remember one time I got a case of The Cup and pulled my first Wayne Gretzky autograph. I was so excited I stopped paying attention to driving, ran a red light and almost wrecked. That scared me straight. Now I open all my packs in the shop or when I get home.”

It does seem silly that we would have to tell collectors not to open up packs while driving, but after hearing these stories, it is easy to see that this is a real problem and it could be a fatal one. Please DO NOT BUST AND DRIVE! Make it a New Year’s resolution to either open your packs at the shop or put them in the trunk. As of right now there are no statistics on accidents caused by opening packs while driving and we don’t want you to become one.


don’t make it out of the parking lot most of the time.


I admit, I do it a LOT! But never have I ran off road or into another lane or not even have came close to an accident, maybe peripheral vision helps, I dunno but I can’t help it! I WANT MY Upper Deck and I WANT IT NOW! lol 🙂 Ok, won’t do it anymore 🙂 It can be as bad as texting while driving 🙂