Collector of the Month: Michael Wilkie

Each month Upper Deck spotlights one of its valued collectors to showcase their collection. The great thing about sports collectors is that they are all very different in what they collect, how they collect their items and what they do once they have them. We first came across Michael Wilkie through the Upper Deck Facebook page when he began posting some images of his amazing collection. I spoke with him a little more about his collection on Card Corner Club’s online radio show and couldn’t wait to see more images of what he had put together. So without further adieu, get to know Michael Wilkie and his collection. 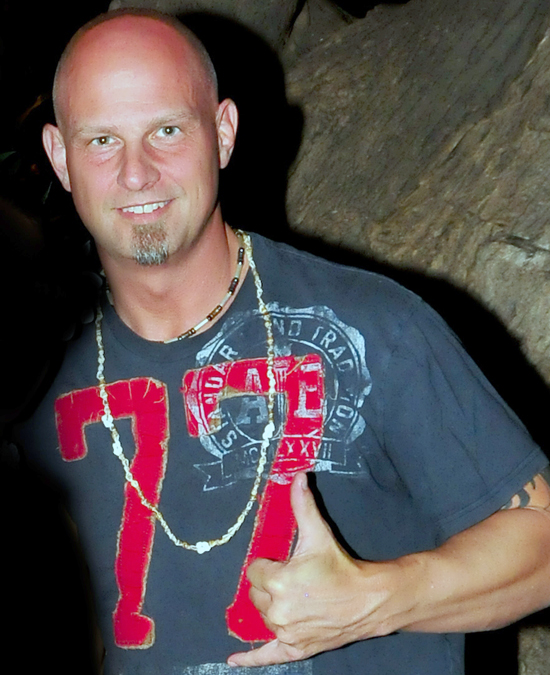 Get to know Michael Wilkie, our latest Collector of the Month!

My name is Michael Wilkie and I live in the Minneapolis area. I have been collecting trading cards since 1977 when I built my first baseball set of 1977 Topps Baseball. As a huge fan of the games of baseball and football I was interested in sports cards at a very young age and I loved the thrill of finding rookie cards. My brothers and I used to go to the corner store once a week and buy two packs each for 33 cents a pack just hoping to find the missing cards we needed to complete the set or a great rookie card. To this day that excitement and fun still stick with me as I collect.

When I first discovered Upper Deck I was immediately impressed. I remember the card designs always seemed just a bit sharper, cleaner and more appealing than the other brands. It seemed like the card stock was brighter and stronger too. I first started buying Upper Deck products around 1991. One of my first favorites was the 2003 Upper Deck SP Football set. When the inserts started showing up it was like finding a little slice of heaven. The die-cuts, holograms, holofoils, etc., were really spectacular. 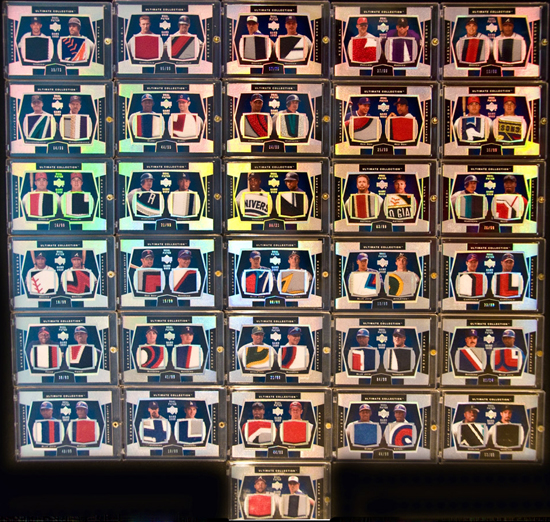 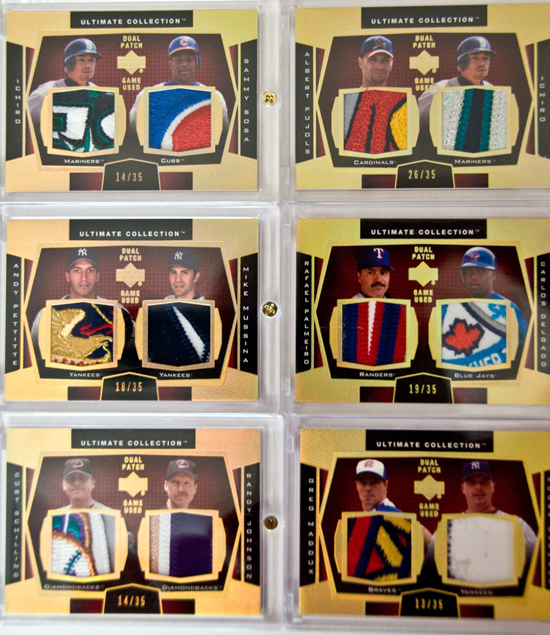 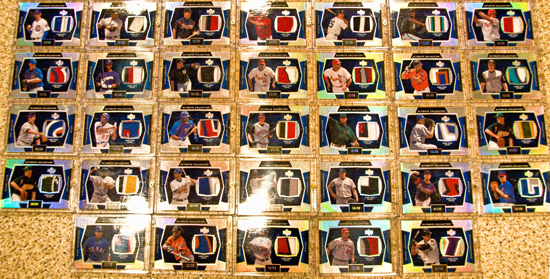 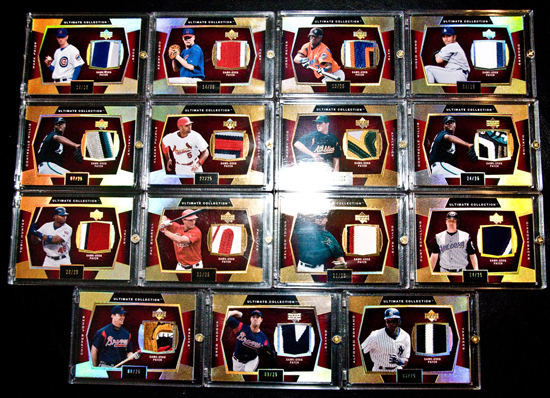 As card technology continued to advance followed by game-used materials and autographs becoming more commonplace, it became very apparent to me that I was a set collector. While I do enjoy a few select players in my personal collection, nothing really fills the need for the “hunt” than to pick out a subset from a new product and go for the complete sets. Personally, I think Upper Deck produced three of the greatest products ever with the 2003 Ultimate Collection Baseball, 2008 Premier Football and 2008 SP Rookie Threads Football. I set out to complete many of the subsets in these products and accomplished those missions.

The simplicity, yet amazing designs of each of these sets, along with the presence of unbelievable patches fueled my desire to complete each of them. Not to be outdone I also chose the 88-card set of 2008 Icons Rainbow Autographs Football to help round out my insane love of patch cards. 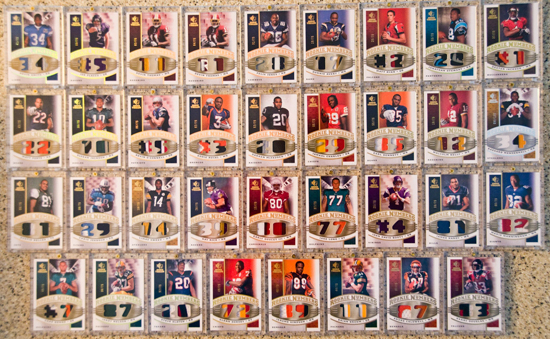 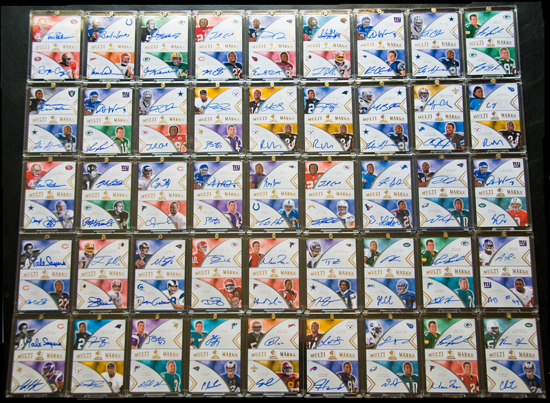 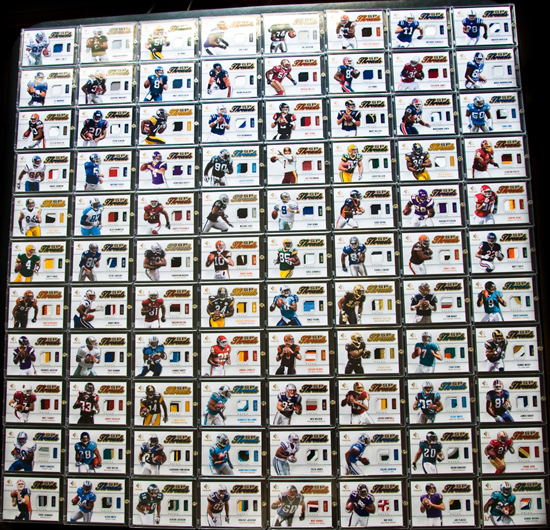 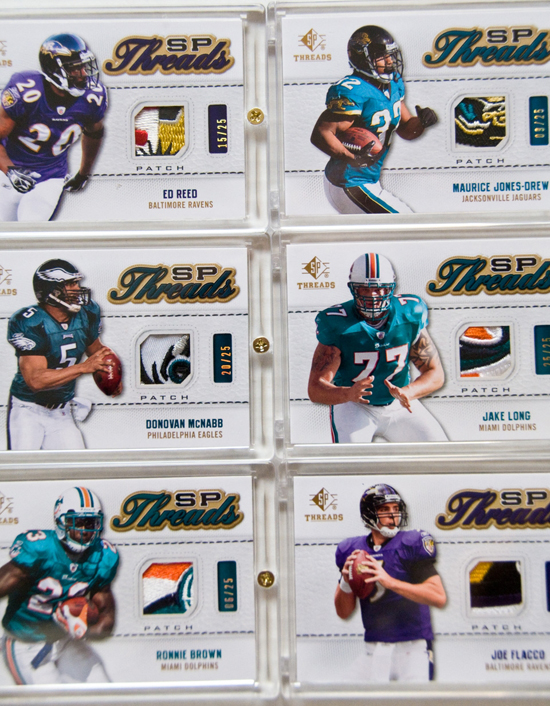 A huge part of my current love of collecting is the development of sports cards “communities” such as the expansive group of people found within YouTube. There are thousands of collectors there and the opportunities for box breaks, trades, “maildays” showing cards, set building displays, mystery packs, subscriber contests and countless other creative presentations of cards are plentiful. In a couple short years I have grown my subscriber base to nearly 2000 YouTubers (you can find me under screen name Arfalc77 on YouTube with the nickname “7’s”). The ability to find cards through networking in this venue is simply awesome. Promoting collecting as a hobby among friends and family on YouTube has been a thrill to say the least. All of my completed Upper Deck sets have been shown on YouTube via video at some point or another.

Also, within this community we have built a kind of language all our own to describe the cards. This includes, but is not limited to the following adjectives often used to describe cards: SICK, EPIC, DISGUSTING, FATAL, DISEASED, STRONG, FILTHY, DIRTY and NASTY just to name a few!! This is truly the medium that took my collecting to the next level and Upper Deck has emerged as my favorite brand. While there are other forums, social network sites and live online venues such as blogtv and blogtalk radio that all feature the hobby of sports card collecting, YouTube truly reigns supreme for me.

I share the hobby of collecting baseball and football cards with my 8-year-old son. It’s a great way to start a family tradition and share time on something special in place of video games or television. It’s important to me that this hobby continues to find its way to young people to help keep the business alive. In a world full of so many technological distractions, card collecting really presents a simple and basic opportunity for bonding and sharing a love for sports. I’m passionate about this. I’m also thankful for the wealth of friendships I’ve found through this hobby. I fully intend on continuing to build sets and increase the size of my personal collection for years to come. I look forward to Upper Deck being a part of that!

Thanks for sharing Michael, we’re excited to continue providing you with the highest-quality, most-innovative releases in the industry. Michael is still looking for a number of cards from the 2003 Ultimate Collection Baseball set in the silver, copper and gold sets. If you have any of those cards, shoot him an email at ARfalc77@aol.com.


Unbelievable to say the least! Michael deserves this 100%!


this guy must have an unlimited amount of money and spends hours on Ebay, well good for him….have fun man.


Michael represents what collecting cards should be about ! The Passion he shows for our Hobby is unmatched !Truly an abassador for the card collecting community ! Congratulations Michael!


Totally well deserved for Michael! An absolutely fantastic guy with nothing but good things to say/do about the hobby! Congrats!


Congrats on the accomplishment Michael, I know you have some of the nicest collections of patches around and am glad to know you on youtube.

In response to Ken, just takes a click to watch an item and most of the time last minute bids can get you some of these at bargain prices, as well as “TTM” (Tube Trader Mail) trades or maildays like mentioned in the article.


Congrats Michael !!! These are truly some amazing accomplishments !!! Don’t ever let ANY haters rain on your parade ! 7’s Amish SALUTE !


Michael, you deserve this very much!!!You are very well appreciated in the Youtube community and to the Upper Deck company, you are what I would like to be when i grow pu, Thank you Michael!!!


Michael is a great asset to our community. Proving positive examles to young & older collectors.

To answer the comment of Ken Scopelleti (above). Michael lost his job last year this time and does NOT have an unlimited supply of money. He has had the respect of members of the YouTube community to help him find and obtain cards he needed for his sets. Some of these card had been a work in progress before he even came into the community. This IS what makes our group such an great, new diverse way to collect !


Great Article, Its About Time Someone Recognize Michael He Has been A Huge Part of the Reason I Continue to Collect, And why I Have gottin my Son into the Hobby. I Seen how cards bring him and his Son together and how excited his boy is to Open Maildays and I Knew that my Son would Love it Too. Thanks 7’s, I Salute You!!