Each month Upper Deck spotlights one of its valued collectors to showcase their collection. The great thing about sports collectors is that they are all very different in what they collect, how they collect their items, and what they do once they have them. We first met Alexander Sipos through the Upper Deck Facebook page through normal interactions about where he frequently posted card images or was asking questions about his favorite player, Kevin Durant. 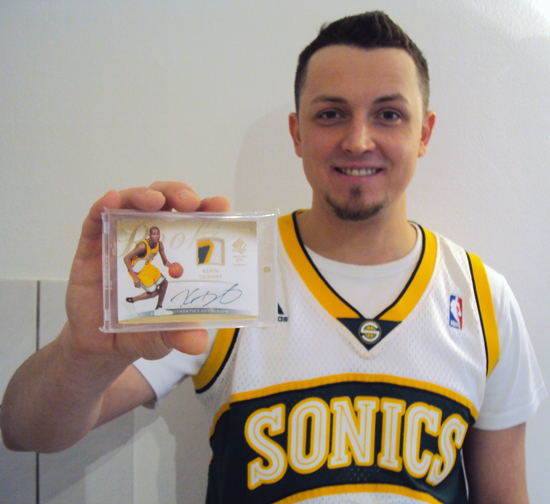 Guten Tag, get to meet our latest Collector of the Month from Germany!

One of the cool things about Alexander is that he is a collector from overseas. It’s not easy for collectors to get trading cards abroad, but one thing we’ve noticed through our Facebook page is just how much international support we have. Of our more than 9,000 fans, over 500 are from Europe, 300 are from the Philippines, over 250 are from Asia and over 175 are from Australia. So while it is not uncommon to be a collector outside of the United States and Canada, it’s not exactly easy. We wanted to hear Alexander’s story about what it is like collecting overseas and here he is to share:

My name is Alexander Sipos and I live in Bensheim, Germany, right next to Frankfurt. I’ve always been a huge basketball fan and I really love watching the NBA. If I’m not working on adding to my collection, you can find me on the court practicing and playing basketball with friends.

“As a passionate basketball fan, it made sense that I would get involved in collecting basketball cards and I started my collection in the mid-‘90s. The Chicago Bulls had a huge following here in Germany and like so many others around the globe, I was a huge Michael Jordan fan and loved the thrill of finding new MJ cards.

I lived in Darmstadt when I was I kid, right next to the U.S. military barracks, in an area called Lincoln Village. I thought it was cool to hang out around the military bases in Darmstadt, Heidelberg and Mannheim because it made it easier to get great soft drinks, junk food and, of course, packs of trading cards. They carried mostly Upper Deck stuff and once I started opening those packs I was hooked.

We would trade with the kids on the basketball court, and although my English wasn’t perfect, I was still able to negotiate some great trades which was really a lot of fun.

I made a lot of great friendships with the American servicemen and have fond memories of celebrating some fun U.S. holidays like Halloween and Thanksgiving with my American neighbors.

When the time came where Michael Jordan finally retired, I stopped collecting. Without Jordan I just lost interest in the sport and the hobby so I sold my cards and pursued other interests. Even our television stations stopped broadcasting NBA games after Jordan retired. My passion for basketball was not entirely lost, it lay sleeping inside me. I still played the game, but just didn’t watch as much or collect.

After 9-11 the safety restrictions at American bases got much more strict and we were not allowed to go in those areas anymore. More Americans were transferred to the Middle East during that time and sadly I ended up losing touch with many of my new friends.

During my studies in Frankfurt, I discovered a wonderful website called eBay. As I was browsing around, I started looking after card again. That was in 2005 and it didn’t take too long for me to spend time on that site before I purchased my first box. It was a 2005-06 Upper Deck Hardcourt Basketball box and I remember pulling a Chris Paul autographed rookie card from the last pack. At the time I really didn’t know who he even was because they just didn’t broadcast many of the Hornets games over here, but I was thrilled when I found out he was the #1 pick in the NBA Draft and later became the Rookie of the Year.

That experience helped reignite my passion for the hobby and I spent the next two years buying and selling trading cards again on eBay for fun, but also to make a small profit. As time went by I really wanted to start a personal collection (PC). I liked LeBron James, but his cards were already too expensive at that point and I wanted to focus on rookie year cards. So I was left wondering, who should I collect?

A few weeks before the 2007-08 NBA season tipped off, I recognized a guy named Kevin Durant. I began watching YouTube videos from his outstanding play at the University of Texas. I’ve always loved clutch players with a great shot who play the game like Mike so I made the decision to start collecting Kevin Durant. As I watched him play I really thought he could be one of the best to ever play the game because he just keeps on getting better every season. 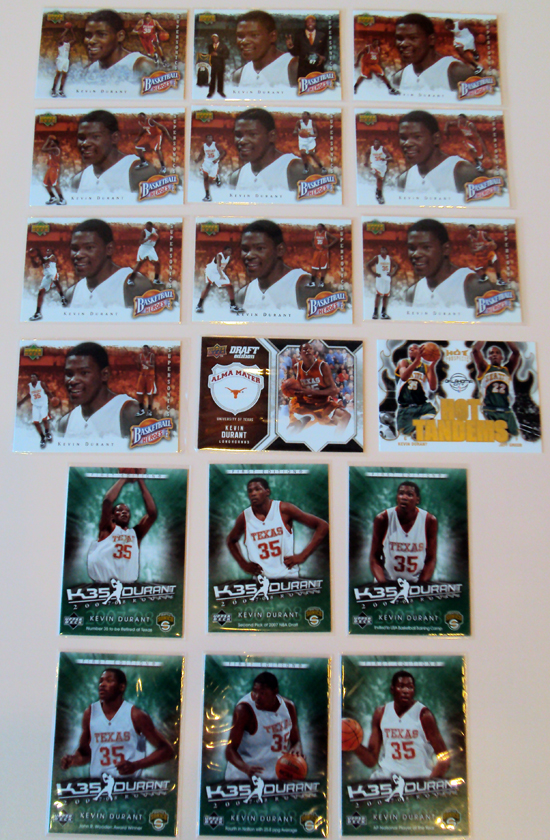 A huge talent at Texas, Kevin Durant has taken his game to the next level in the pros.

Upper Deck had always been my favorite card manufacturer and with Durant being an Upper Deck exclusive spokesman, it was safe to say that I spent almost all of my money on Upper Deck cards. I’m grateful to Upper Deck for helping me find my passion not just for collecting again, but for basketball as a whole. Upper Deck came out with some amazing Durant cards in his rookie year and I spent a lot of my free time trying to collect them all.

As Durant emerged as the best prospect, I was so excited I had chosen the right player to collect as many people thought Greg Oden would be the top player in that year’s rookie class. As the season progressed and Durant established himself as a dominant NBA player, I couldn’t believe my eyes when I saw how much his rookie cards were selling for. It’s been awesome to see my personal collection of my favorite player appreciate over time.

What's in a name? Alexander did a great job of tracking down these nameplates. 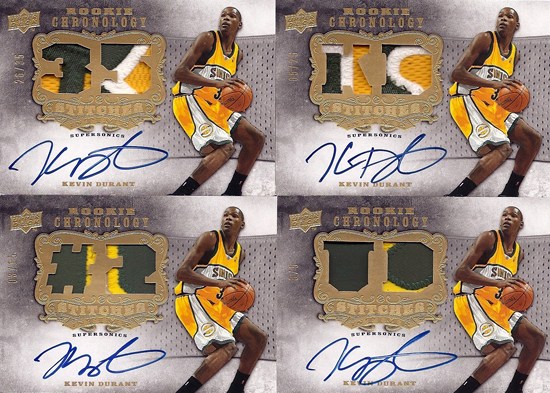 One of Alexander's favorite sets is Chronology. It's easy to see why he misses that set based on these cards. 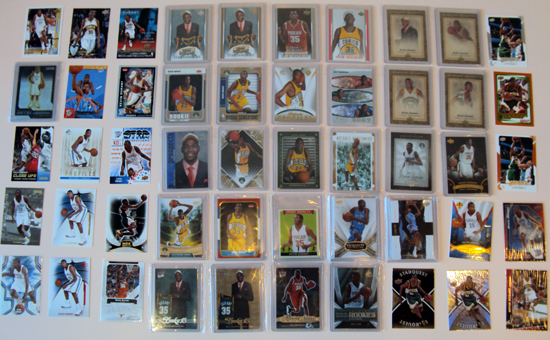 Check out all these different Durant inserts! 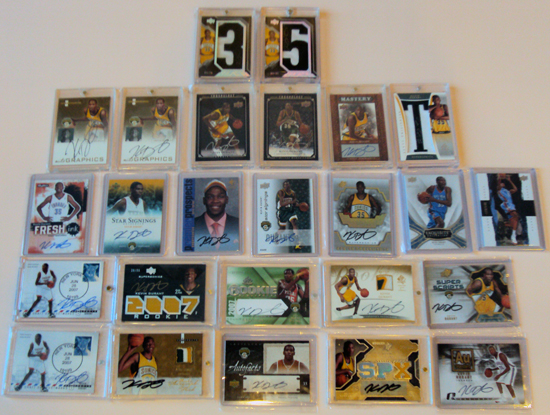 Autos and memorabilia of Durant galore. A very impressive collection to say the least.

Being an international collector is not as easy as making a few clicks on eBay, however. There are quite a few aspects that make collecting abroad a challenge. The biggest issue is high shipping costs and customs clearance. It is more than a little frustrating having to pay about 30% on top of the original price of a card just to get it.

One nice new element that has come up over the last few years is online trading card communities where like-minded collectors can share the hobby online and help each other track down cards. I’ve really enjoyed being a part of the German community dascardboard.eu and HobbyKings.com. If you’re on those message boards and sitting on some Kevin Durant cards, contact me under my usernames Durantula and KD35.

It was a sad day for me when I heard Upper Deck would no longer be producing NBA-licensed cards. I was hopeful that since Panini was a European company that we would see the hobby grow over here with trading cards a little easier to find in stores, but that hasn’t happened. Their Basketball products aren’t even available in Italy. I tried a few of their boxes, but the feeling of opening packs just isn’t the same as when Upper Deck was producing NBA cards. If you don’t have the opportunity to pull a Michael Jordan or LeBron James autograph card, the thrill of opening a pack is greatly reduced. I’ve been an Upper Deck fan since I started collecting in my childhood and that will never change. My favorite brands are SP Authentic (I’m already exited about the new 2010-11 release), UD Black and, of course, NBA Chronology. How can you not love these products?

I intend on continuing to grow my Kevin Durant PC and increase the size of my rookie year collection for years to come. I’m planning on holding on to all my Durant cards as I continue watching him grow and hopefully become the game’s best player. Thank you Upper Deck for being a huge part of my life and for making my PC a very special one. I’m so proud of it!

You should be proud of your collection, Alexander. It’s amazing to see what you’ve been able to amass so far of Kevin Durant. We at Upper Deck love the game of basketball so we’re excited to see what the future holds in terms of potential licensing changes and new opportunities for us. We wish you all the best and we look forward to hearing more about what you add to your collection on Facebook!


funny without any exquisite rc to be a supercollector

Congrats, Alexander! Not everyone can afford Exquisites much less throw loads of money at a single card, especially when you have different set autos of KD!


Upper Deck is magnificent one.. Please help them back to the NBA…