Brace Yourselves: Hobby Legend Don West is Back!

If you enjoy the sports collectibles hobby, you probably have an appreciation for the old late night infomercials where guys like Kenny Goldin and Don West used to dazzle us with deals that seemed too good to be true. They were charismatic and funny and even I’ve admitted before that I miss guys like Don West. Well guess what, heeeee’s baaaaaack! 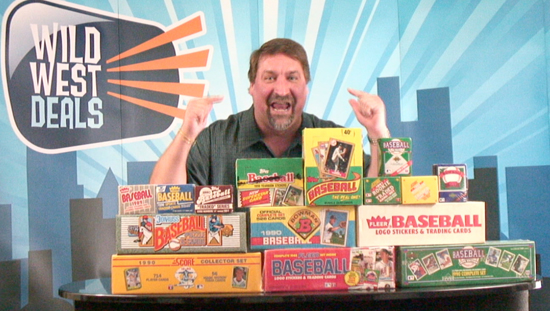 Back in the day Don West would talk until he was red in the face about the deals you are missing out on. Did you pick up the phone and dial???

That’s right, Don West has started wildwestdeals.com where he is broadcasting again and sharing exciting items from the world of sports collectibles in a new show called “Wild West Deals.” Recently, the Upper Deck Blog was able to get an exclusive interview with Don to see what’s been going on and what we can look forward to seeing.

UD Blog: How did you get involved in the world of sports collectibles?

Don West: “I have always been a sports junkie. I started collecting baseball cards at the age of 5. I would also cut out pictures from Sports Illustrated and keep them in albums. As I got older I was able to collect better and better items. It has always been a passion for me.”

UD Blog: Tell us about your collection; what does Don West collect?

Don West: “For me it was baseball cards at first like I said. At one time I probably had a couple of hundred thousand cards. Through the years I sold quite a few and most weren’t in good shape as I played with them constantly. Today I mostly collect autographed memorabilia with my favorite piece being of Muhammad Ali and myself.”

UD Blog: What about becoming a pitch man? How did that come about?

Don West: “My brother Dale worked for Shop-at-Home at the time [1991] and he knew of my love for sports. They were looking for someone to host their Sports show at the time and he got me an interview. Funny thing was that they didn’t hire me. They said my voice was too rough and it wouldn’t go over well with the audience. I got a job with Blade Magazine and started helping them sell knives on TV and helped increased their sales from about $50,000 a year to close to a million a year. Then Shop-at-Home came calling again and the rest is history as they say.” 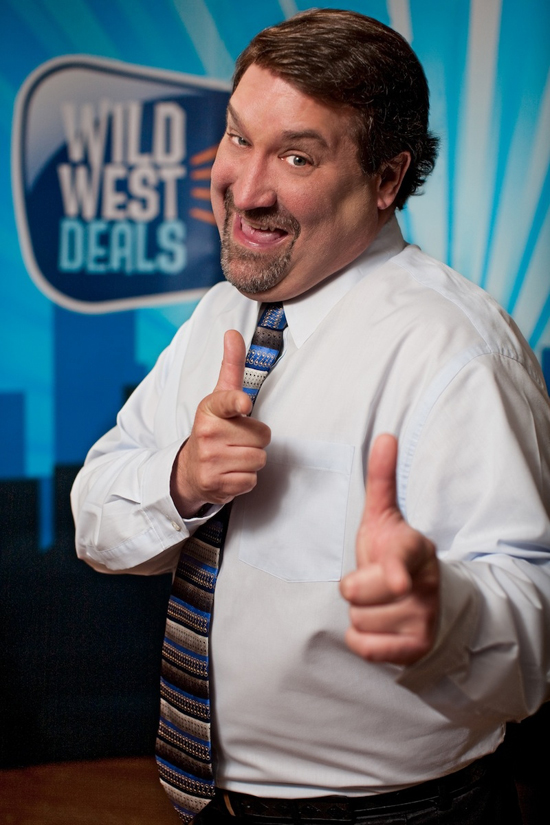 He can sell ice to Eskimos and sports fans often give into his "Wild West Deals."

UD Blog: What was the BEST offer you ever had from your past life as a pitchman that collectors missed out on if they didn’t purchase it then?

Don West: “I remember selling unopened packs of ’86-87 Fleer Basketball cards one time for $50 a pack. As you know there are a lot of great rookies in those packs, and of course the best being Michael Jordan. People who jumped on that deal definitely did well.”

UD Blog: What did you think when you saw the “Saturday Night Live” parody sketch of your show?

Don West: “That was one of the 10 best days of my life. I was actually doing a live show at the time and we had a TV in the studio that was muted with NBC on. Even with no volume, when we saw Will Ferrell doing the parody, we knew instantly it was us. It was surreal to say the least.” 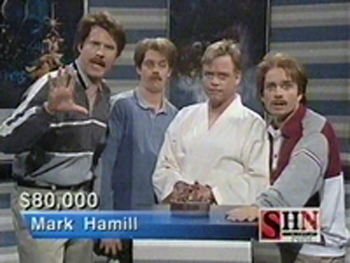 Will Ferrell impersonates Don West on Saturday Night Live. In this parody, they attempt to sell Mark Hamill for $80,000.

UD Blog: Imitation is the sincerest form of flattery and your show helped you reach pseudo-celebrity status. Any other stories about how the show or your sales style were picked up by others?

Don West: “I was watching the movie “Girl 6” by Spike Lee and in the movie he used my line verbatim that I used to sell 1989 Upper Deck Ken Griffey Jr. Rookie Cards. “My retirement plan is to collect one thousand 1989 Upper Deck Ken Griffey Jr. rookies and when they get to $1000 a piece, then I will have my first million dollars.” It was great hearing Spike say that in the movie.

UD Blog: Why did you leave the business?

Don West: “It was time to leave. I was burned out from the long hours. I was up in the middle of the night doing the show and then they got new owners and management so the timing seemed right. We came to a financial agreement and parted ways.”

UD Blog: What were the best and worst aspects of working with TNA Wrestling?

Don West: “I am still in the wrestling business as the Director of Merchandise for TNA Wrestling so there are no worse aspects to the business. I love every minute of it.” 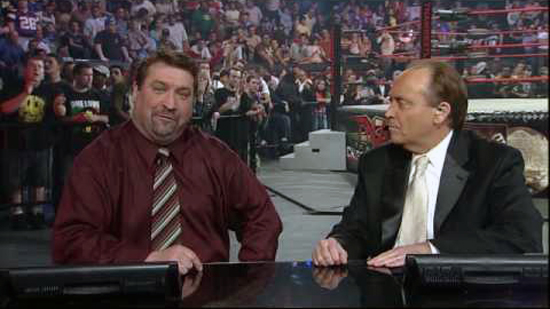 UD Blog: Well, besides wrestling, you’re back doing what we think you do best. What brought you back?

Don West: “The timing was perfect, as I have always loved selling sports cards and memorabilia. I just had to find a way to do it on my terms. With this new deal, nobody tells me what I have to sell and we can work to get the best products for the customers at the best price.”

UD Blog: Why should collectors tune into the new show?

Don West: “Not only are you going to get a great product at a great price, but I promise you will be entertained along the way.”

Don is back on Wednesday, January 26 so stay tuned for more details at wildwestdeals.com. Say what you want about Don or his sales tactics, there is no denying he is truly one of the great characters in the hobby and a lot of fun to watch.