Aaron Rodgers: The Man with the Golden Arm

Let me preface this piece with the fact that I am a longtime New England Patriots fan. I was rooting for the Pats way back when a guy named Jim Plunkett was lining up behind center and throwing to his old Stanford teammate, Randy Vataha.

But this postseason – stemming largely from last weekend’s debacle against the New York Jets – I’m now rooting for an NFC team to win it all: the Green Bay Packers. And one of the biggest reasons why is because I happen to admire their signal-caller, Aaron Rodgers. Here’s a guy who got drafted in 2005 (24th pick overall) and promptly carried a clipboard for three seasons in Green Bay. He came out of Cal with great numbers but found himself stuck behind “Father Time,” a.k.a. Brett Favre. As a result of Favre’s uncertainty about whether or not to retire, Rodgers spent way too much time on the sidelines backing up the surefire Hall-of-Famer. 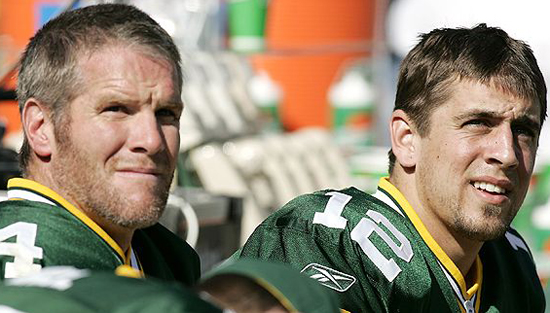 TWO QBs IN A POD: Rodgers, right, spent three seasons waiting for Favre to hang up his cleats.

Exhibiting great patience, Rodgers was finally rewarded with his opportunity to start for Green Bay when the Pack dealt graybeard Brett to the New York Jets prior to the start of the 2008 season. And the rest, as they say, is history.

Rodgers has fully embraced his role at Lambeau Field as the second coming of, well, Favre. In his first full season starting behind center, Rodgers threw for 4,038 yards and 28 touchdowns, completing 63.6% of his passes. A year later, he passed for 4,438 yards and 30 touchdowns (completing 64.7%). And this season, despite sitting out one game with a concussion, Rodgers completed 65.7% of his passes for 3,922 yards and 28 touchdown passes. But the best was yet to come as No. 12 has so far performed flawlessly in the playoffs.

Against Philadelphia in the NFC Wild-Card round, Rodgers led the Packers to a thrilling 21-16 victory on the road as he connected on three TD passes to three different receivers: Tom Crabtree, James Jones and Brandon Jackson. (He should have had four TDs, but Jones dropped a very catchable throw near the end of the first half which would have put the Packers up 21-3.) Last week, he shredded the top-seeded Falcons with three more TD tosses during a convincing 48-21 win inside the hostile Georgia Dome, a place where Falcons QB Matt Ryan was riding a 20-2 record heading into the Divisional battle. 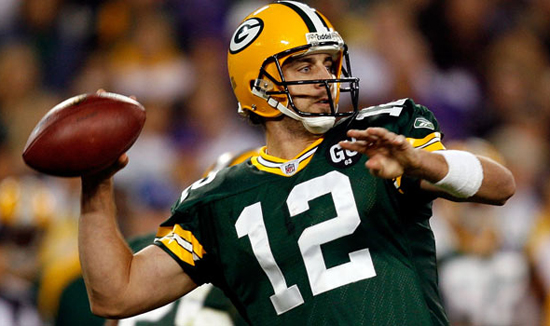 PRECISE PASSER: Rodgers completed 65.7% of his passes this season for Green Bay.

Rodgers seems to be peaking at just the right time. He’s always been consistent, but now he’s winning hard-fought battles on the road, seemingly all the way to Super Bowl XLV. The last time the Packers competed in the NFC Championship game was three years ago when Rodgers’ predecessor, Mr. “Fav-Rah,” threw an ill-timed (albeit kind of expected) interception in overtime to hand the New York Giants the keys to the University of Phoenix Stadium and the right to battle the New England Patriots for the Lombardi Trophy in Super Bowl XLII. (And we all know how that one turned out, right?)

This year it appears that Rodgers and the Pack will wind up in Dallas, battling either the Jets or Steelers (I hate them both). Which is worse: Not wanting the Steelers to win so Ben Roethlisberger will be denied his third ring (keeping him one behind Tom Brady)? Or not wanting the Jets to win because Rex Ryan is such a blowhard? Either way, the AFC champ will go down in flames against the man with the golden arm, Aaron Rodgers. You read it here first.

By the way, if you’re a Packers supporter, or just a loyal fan of Mr. Rodgers, Upper Deck Authenticated (UDA) has one of the widest selections of his autographed memorabilia on the planet. Go to the Upper Deck Store and check out his signed Packers jerseys, helmets, mini-helmets and footballs. Might as well get in on the ground floor of Mr. Rodgers’ gridiron game game. 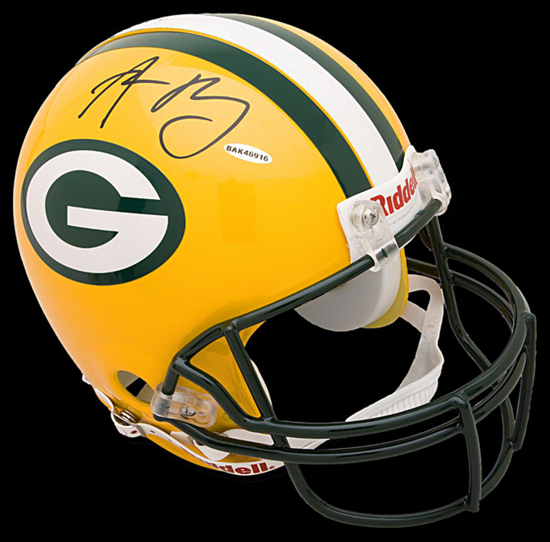