Rise and Shine with the Morning News at Upper Deck

When you work with the world’s greatest athletes and help in the creation of some of the most compelling sports memorabilia on the planet, people tend to take notice. Such is the case with an online promotion we’ve been running on the Upper Deck Blog that we’re calling the 12 Days of Holiday Gift Ideas. Collectors love it, but even the local media took notice.

After shooting off a quick email to local TV stations touting our coolest new product innovations, I quickly got a call from San Diego 6 News and its roving, on-air correspondent: Ruben “The Man” Galvan. He wanted to visit Upper Deck headquarters ASAP to get an up-close look at some of the eye-popping collectibles we’ve been featuring. Aaron Rodgers, LeBron James, Bobby Orr, Michael Jordan, Ryan Mathews; name the athlete and sport, and chances are we’ve got him featured in one of our products. HI MOM: Here we are, moments after filming our third segment for this morning's San Diego 6 News telecast. That's me, sporting the Upper Deck apparel; Ruben chose to go with a yellow v-neck. To each his own.

For me, as Upper Deck’s public relation manager and on-air spokesman, it’s always fun to take an inside look at our own collectibles as well as talk about how we work exclusively with many of the sports world’s top talent. This morning, on San Diego 6 News, I got the chance to show off several of our newest products including a game-used set of LeBron’s home Heat uniform that sold to a private collector near South Beach, Florida, for “ten of thousands of dollars.” But before I could start yapping about LeBron and his incredible performances on the court, I needed to get our lobby looking sharp for Ruben’s impending visit.

Luckily for me, Sr. Events Marketing Manager Jodi Wasserman already had the lobby decked out in festive holiday garb, complete with a well-lit Christmas tree with gifts underneath it. It’s important to be ready and, thanks to Jodi, we were well prepared for visitors. Next, working alongside the UDA team, namely Steve Sloan, Shauna Conniry and John Ibriks, I was able to secure choice gridiron pieces from Ryan Mathews (signed football and Chargers mini-helmet), Aaron Rodgers (signed Packers green jersey, authentic Packers helmet and a football) and basketball icon Michael Jordan (16 x 20s with game-used floor framing and a vertical curve display piece with a piece of the floor from Chicago’s United Center upon which MJ closed out three of his six NBA championships: 1996-98). EARLY WAKE-UP CALL: The San Diego 6 News van showed up at 5:50 this morning. Good thing we were ready!

We also collected a few recent NHL products including autographed Curve Display pieces featuring photos and signed pucks from the likes of Steven Stamkos, Taylor Hall, Duncan Keith and Boston hockey legend Bobby Orr. We even had signed photos of Orr highlighting his game- and series-winning overtime goal against the St. Louis Blues in Game 4 of the 1970 Stanley Cup Finals, as well as a very cool signed acrylic stick blade from Chicago Blackhawks center and team captain Jonathan Toews.

These were all well received by Ruben and his crew (and hopefully their viewers as well), but of utmost importance to me was the chance to explain why it’s so important for people to purchase their signed memorabilia from a reputable company like Upper Deck Authenticated (UDA). Forgeries run rampant in our industry, so the fact that every one of UDA’s pieces is signed by our superstar athletes in the presence of a UDA representative is critical. UDA introduced its patented five-step authentication process back in 1992 and competitors have been trying to imitate (but never duplicate) it ever since. We invented authenticity here at Upper Deck, so it’s my honor and privilege to spread the good word about it whenever I can. This is even more important during the holidays, when many unsuspecting consumers are taken for a ride by unscrupulous online sellers looking to make a fast buck.

I’ve done my fair share of these morning segments during my 12-plus years at Upper Deck and there are a couple things you’ve got to do to be successful with your on-air delivery. First, it’s important to have plenty of great items – key visuals – to feature during a television broadcast. Second, you’ve got to make sure you’re sporting a clean, up-to-date company shirt for brand recognition. Third, you should always have a few key stats per player to share to make sure the viewer knows you’re a marketer, yes, but also an educated sports enthusiast who follows the sports world closely. And lastly – and perhaps most importantly – you need to make sure you’ve had your morning cup of coffee since these early interviews usually take place between 5:00 and 7:00 a.m.

This morning, we filmed three segments (one live, two taped) that aired between 6:45 and 8:30 a.m. Ruben was his old enthusiastic self and I did my best to showcase our newest products while trying to avoid sticker shock from our viewers since authentic, genuine signed memorabilia does not come cheap. Best rest assured, it’s real and it’s yours, provided you’re ready to pony up for the real deal. To check out our huge assortment of signed and unsigned sports memorabilia for the perfect holiday gift, visit Upper Deck’s online store. Happy shopping collectors! 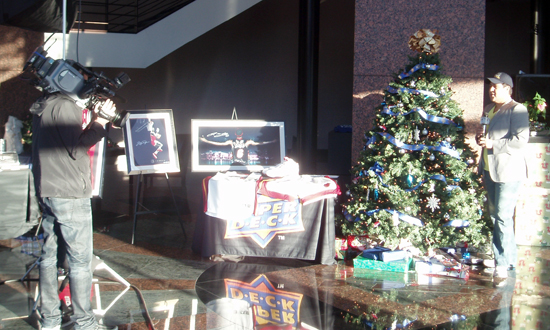