How Far Would You Go For an Autograph?

The Philadelphia Eagles and the Dallas Cowboys share a rivalry that goes back decades. Even though the Cowboys have not had the best year, there was a lot of attention to the Sunday night game last evening where these two teams renewed that rivalry. The Cowboys held close, but ultimately it was Michael Vick and Philadelphia Eagles who prevailed. 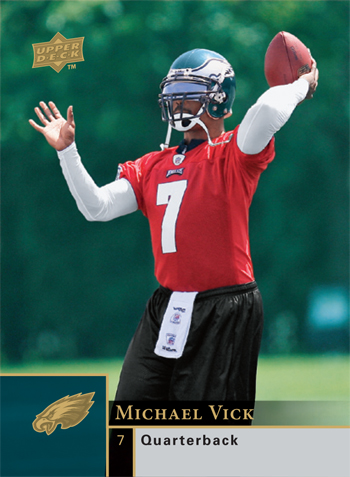 Michael Vick has definitely shown his star power by being selected for the Pro-Bowl this season and putting his past behind him.

The odd point of the night came at the end of the game as both teams met in the center of the field. After suffering a tough loss at home to a rival, Tashard Choice of Dallas was caught on tape asking Michael Vick to autograph his glove.

After the game, he explained, “My little nephew is two-years-old, so I had to get one for him.” The tough part for Tashard will be explaining that to Jerry Jones this week. It’s certainly not surprising people would be interested in getting an autograph from Michael Vick as he has definitely shown he is back, but the timing here certainly seemed less than ideal to say the least.

It is amazing how far Michael Vick has come given all he has been through. At the 2009 National Sports Collectors Convention we saw former child actor Scotty Schwatz purchasing and destroying more than a few Michael Vick autograph lithographs because of his disdain for the football star. In a relatively short time however, it seems people are willing to forgive Vick for his troubled past (we’re fairly certain Scotty hasn’t forgiven him yet however).

It seems fans will go to great lengths to get an autograph from their favorite sports stars and doing so can be very difficult. Just take a look at this video of fans mobbing Michael Jordan while golfing.

As the leader in producing the world’s greatest memorabilia, Upper Deck Authenticated is pleased to bring authentic autographs of many of your favorite stars to sports fans around the world. So if you are looking to avoid a mob scene on a golf course, or an embarrassing situation on camera after a game, look no further than Upper Deck Authenticated to deliver the top sports stars to you and the sports fan in your life this holiday season.