Michael Jordan is considered one of the greatest basketball showmen of all time. Not only did he earn six NBA titles during his tenure with the Chicago Bulls, but he also locked up 10 individual scoring titles. But an event that helped put Michael’s indelible mark on the sport occurred in 1988 when he captivated the hometown crowd in Chicago during the NBA’s Annual Gatorade Slam-Dunk Contest. Michael earned top honors to score his second consecutive Slam-Dunk crown. Relive MJ’s well-documented acrobatics by purchasing this 16” x 20” autographed photo of him in mid-flight during the final round of competition. What makes this keepsake extra special is that the framing consists of actual game-used floor pieces taken from Chicago’s United Center floor upon which Michael earned out three of his six NBA rings (1996-98). Jordan’s autograph is guaranteed authentic by virtue of UDA’s patented five-step process. Place your order today! 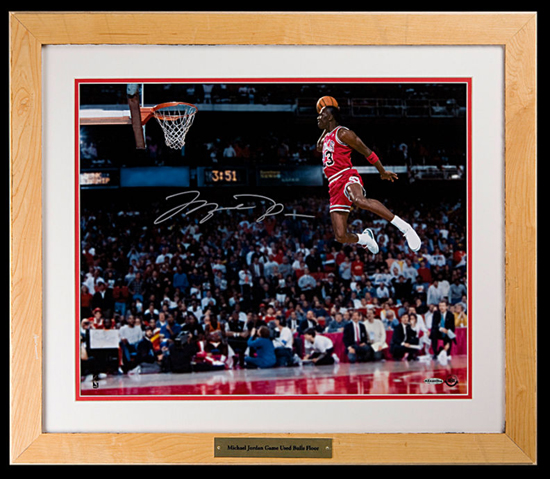 RARE AIR: MJ's magic carpet ride in 1988 wowed the masses in Chicago and around the NBA.