Bobby Orr is widely considered one of the best defensemen ever to lace up a pair of skates in the NHL. A perennial fan favorite with the Boston Bruins, Orr played 10 seasons in Beantown and helped the Bruins win Stanley Cup championships in both 1970 and ’72. It was in 1970, however, when Orr enjoyed a season for the ages. After leading the league in assists (87) and overall points (120), Orr led the Bruins to a four-game sweep of the St. Louis Blues in the Stanley Cup Finals. He punctuated his outstanding season by scoring the winning goal, in overtime, in Game 4 of the finals on May 10, 1970. This beautifully designed keepsake, which measures 16” high x 24” wide, includes narrative text describing the moment as well as Orr’s sensational season and shows No. 4 as he embarks on his celebration after finding the back of the net just 40 seconds into OT. The autographed, limited-edition (25) item, which comes delivered in a top loader for safekeeping, and has been authenticated by Upper Deck Authenticated’s patented five-step authentication process. Place your order today! 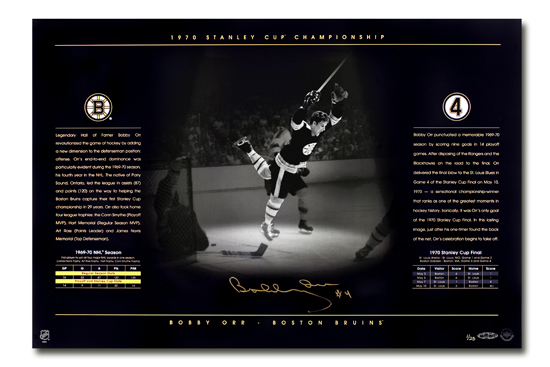 Bobby Orr delivered for the game- and series-winner for Boston in Game 4 of the 1970 Stanley Cup Finals against the St. Louis Blues. Relive the moment, courtesy of Upper Deck Authenticated.