Last night, LeBron James and his Miami Heat teammates ventured into dangerous territory by invading the Quickens Loan Arena in Cleveland. Squaring off against his old teammates – and trying his best to ignore the heckling, jeers and boos from the Cleveland fans – James scored a game-high 38 points to lead the Heat to a 118-90 thrashing of the Cavaliers. And believe it or not, he didn’t even play in the fourth quarter after tallying 24 of his points in the decisive third quarter.

Fast on the heels of LeBron’s return to Cleveland, Upper Deck is proud to unveil this incredible, all-inclusive set of LeBron’s game-used uniform and equipment that he wore during his home Heat debut back on Oct. 29, 2010, at Miami’s American Airlines Arena. Battling against the Orlando Magic, and sporting his new Adidas-manufactured, home white Heat uniform No. 6, James tallied 15 points, pulled down six rebounds and added seven assists to help the Heat lock up a convincing 96-70 victory over their cross-state rival. 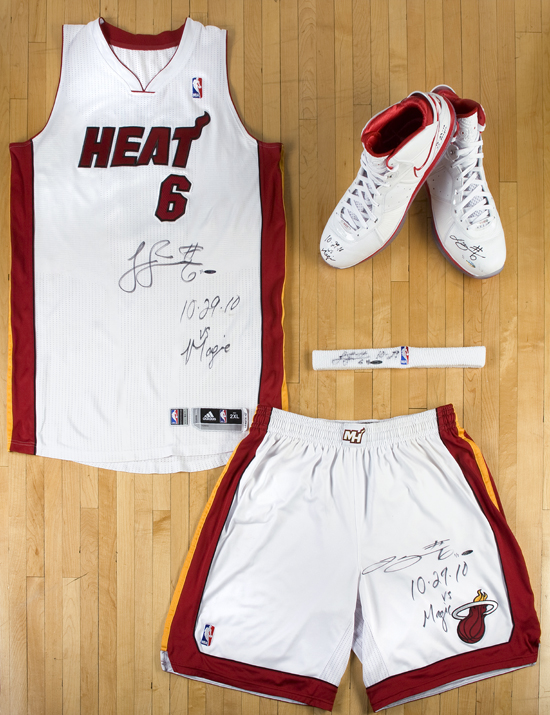 The Real Deal: LeBron's actual uniform from his home Heat debut on Oct. 29 has already been sold.

Relive LeBron’s home Heat debut by purchasing this all-inclusive, game-used set which includes his size 3XL Adidas shorts; size 2XL jersey; his white NBA headband; and his size 16 Nike shoes. LeBron has signed and inscribed each of the pieces with the date of the contest (“10-29-10”) as well as the opponent (“Magic”). LeBron’s signatures and inscriptions are all guaranteed authentic by virtue of Upper Deck Authenticated’s patented five-step process. UPDATE: This particular 1-of-1 game-used set was just sold to a private collector, but to get a piece of LeBron’s game-used equipment from his memorable playing days in Cleveland, click here!