We are winding down the Twelve Days of Holiday Gift Ideas here at Upper Deck and today we have an item that is sure to be a talking piece for the lucky 25 puck fans who secure one before they sell out. Blackhawks fans, score an amazing memorabilia item with this specially designed shadow box piece houses a Jonathan Toews-signed hockey blade. Backed by a crisp action shot of Jonathan, the acrylic blade has an authentic signature in gold with his jersey number.

Toews has been a huge reason for the resurgence we’ve seen with the Chicago Blackhawks as he helped lead the team to it’s first Stanley Cup victory in decades just last season. What’s more, Toews was a huge contributor to Team Canada’s Olympic team as he helped bring home gold for his country in the 2010 Winter Olympics. Don’t miss your chance on owning an innovative collectible from a player destined for superstardom. Order now! 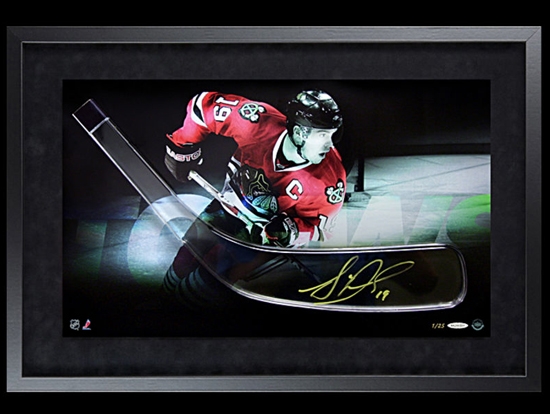