Bob Feller was an anomaly, a major league pitcher ahead of his time. An Iowa farm boy at 16, he was drafted by the Cleveland Indians while still in high school. His contract was for $1.00 and an autographed baseball. He pitched his first major league game a year later and promptly struck out 15 batters. When the season was over, he went back to Van Meter High to graduate. The year was 1936. Feller, a first-ballot Hall of Famer and decorated war hero, died yesterday of acute leukemia. He was 92. 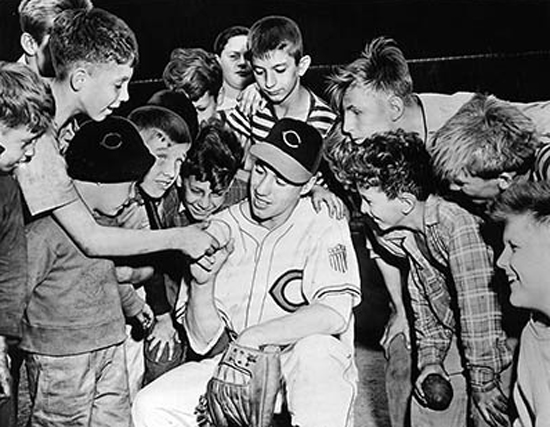 Bob Feller was a big hit with Cleveland youngsters throughout his Indians career.

A member of the Cleveland Indians for all 18 of his major league seasons, Feller was in the starting rotation from the last Indians team to win the World Series (1948). A flame-throwing right-hander who credited his arm strength to milking cows, picking corn and baling hay while growing up on the family farm, Feller earned a pair of nicknames due to the velocity of his pitches: “Rapid Robert” and “Bullet Bob.” Even his fastball earned a moniker: “The Heater from Van Meter.” He won 102 MLB games before the age of 23 and finished his big league career with 2,581 strikeouts and 266 victories, the latter which is still a Cleveland franchise record. In 1946, he pitched 36 complete games, exactly half as many as the entire National League posted in 2010. And he never pitched an inning in the minor leagues.

Over the past day, I’ve heard plenty of sports reporters and broadcasters refer to Feller as “the Nolan Ryan of his day.” But there’s something Feller accomplished beyond baseball that even the great Nolan Ryan can never add to his resume. During the prime of his big league career, Feller joined the Navy. He actually enlisted the day after the attack on Pearl Harbor (Dec. 8, 1941) and quickly became a Gun Captain aboard the USS Alabama. He wound up serving his country in uniform for the next four years and missed four full seasons of play. Had he not voluntarily signed up, he may have rung up as many as 350 victories. He remains the only Chief Petty Officer ever inducted in the Baseball Hall of Fame. 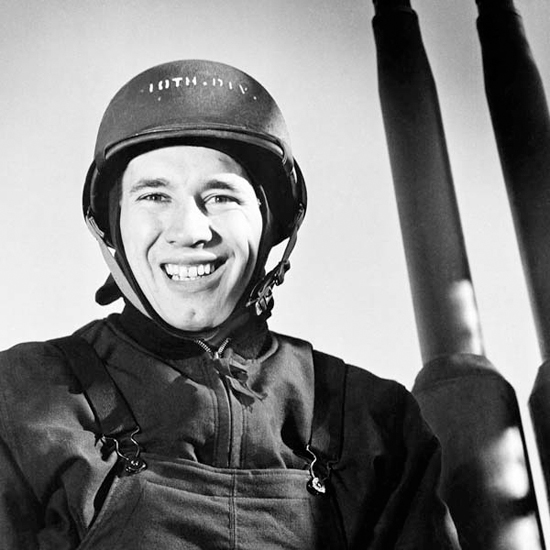 Feller served his country in uniform for four years as a Gun Captain in the Pacific during World War II.

An eight-time All-Star, Feller threw three no-hitters and posted a record 12 one-hitters during his prolific career. He retired from baseball in 1956, but remained a fixture at Indians games throughout the next five decades. In fact, earlier this year, he threw out the ceremonial first pitch at the Indians’ first home spring training game at Goodyear Ballpark in Goodyear, Arizona.

In one of baseball’s most famous photographs, a weakened, terminally ill Babe Ruth, making his last public appearance at Yankee Stadium on June 13, 1948,  leaned on a bat as he addressed the sold-out crowd from home plate. The bat belonged to Feller.

“He just picked it out of the bat rack at random when he came up the steps into the dugout. There was one runway leading to the field. It could have been anybody’s bat, ” recalled Feller years later.

“I was warming up to pitch that ballgame. I couldn’t hear him. I didn’t know until later, when I couldn’t find the bat, that he had used mine.” 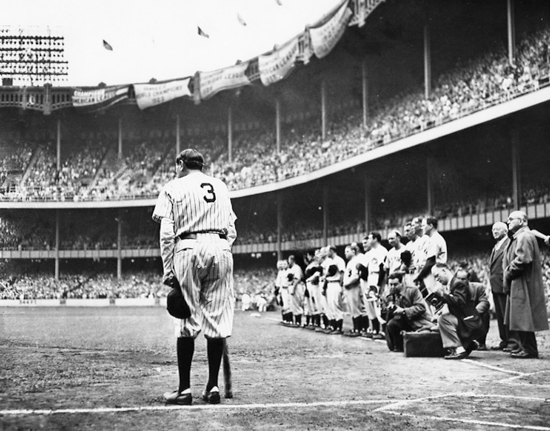 Unbeknownst to Feller, Babe Ruth grabbed his bat to use as a cane during his last public appearance.

Immortalized on too many Upper Deck baseball cards to count, Bob Feller was the true definition of an American hero.