Collectors seemed to be amazed by many of the unique and multi-colored patch cards they were pulling from 2010-11 NHL Artifacts when it released this Fall. Besides the stunning memorabilia cards, collectors were also thrilled to find rookie cards and autograph cards from top NHL rookies and stars. As an added bonus, Upper Deck also included rookie exchange cards as well. 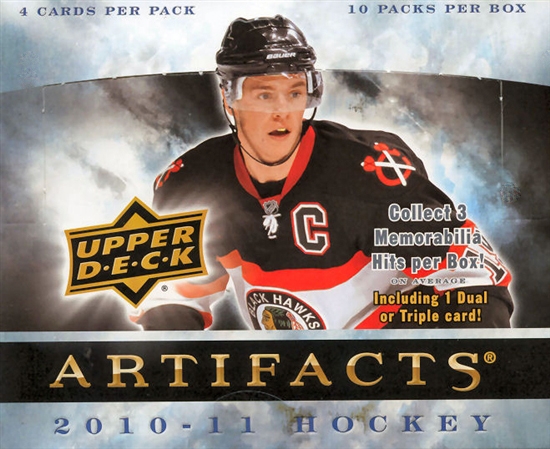 The NHL prohibits trading card manufacturers from releasing rookie cards of players before they have skated in an official NHL game, so including these rookie exchange cards is a great way to add some additional value to the product while also creating excitement for the upcoming season. It’s important to us to allow enough time for this new rookie crop to skate and for some late call-ups before we finalize the checklist and begin production on these cards as we want to have a strong checklist.

One of the added difficulties to finalizing the Artifacts checklist is we need a player for every team to skate, but that didn’t happen this season. New rookies from Detroit, Pittsburgh, Montreal, Florida and Vancouver haven’t skated yet this season. We did have some carryover rookies from those teams who skated last season, but they appeared in the regular set so we couldn’t reissue cards of them. Therefore we treated those cards as “Wild” cards and tried to select the best rookie players from other teams who had skated for those teams.

We are beginning the process of getting these cards created and produced. That process usually takes about three months so we anticipate these should be completed around March. For updates on their status as well as some of the first images of these cards, make sure to visit our Upper Deck facebook page or follow us on twitter.