Hockey fans sure seemed to enjoy the 2009-10 NHL Be-A-Player product Upper Deck released over the summer. Boasting one autograph card in every pack, there was plenty to get excited about. Additionally 2009-10 NHL Be-A-Player had rookie cards from the current season live in packs, but also offered collectors the chance of pulling a rookie exchange card for a rookie from the upcoming 2010-11 NHL season. 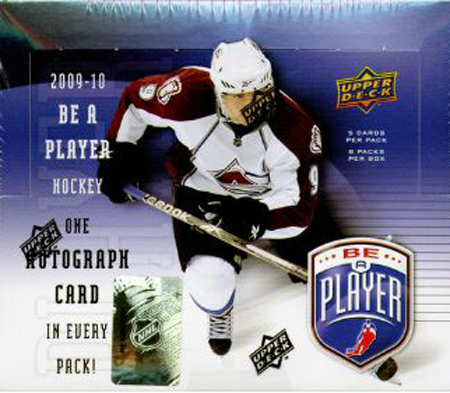 The NHL prohibits trading card manufacturers from releasing rookie cards of players before they have skated in an official NHL game, so including these rookie exchange cards is a great way to add some additional value to the product while also creating excitement for the upcoming season. It’s important to us to allow enough time for this new rookie crop to skate and for some late call-ups before we finalize the checklist and begin production on these cards as we want to have a strong checklist.

We are beginning the process of getting these cards created and produced. That process usually takes about three months so we anticipate these should be completed around February. For updates on their status as well as some of the first images of these cards, make sure to visit our Upper Deck facebook page or follow us on twitter.


Does this mean that example, rookie #19 would be Mark Olver? And will the cards have a peice of jersey or an autograph on them?

Yes, 19 would be Olver. These cards will be crash numbered to 99, but will not be autographed or have jersey swatches embedded in them.


I just redeemed RED#360, PK Subban. Were these cards ever produced? I can’t seem to find any online..