An interesting topic came up at the Upper Deck offices earlier today. Since the big news was the Vikings firing of head coach Brad Childress, this discussion produced an interesting tidbit concerning the Green Bay Packers. As it turns out, this actually marks the second week in a row that the Packers have ended a coach’s tenure with his team. Green Bay ended the Wade Phillips saga in Dallas a week before they finished off Brad Childress. That’s quite the coach-killing resume considering both coaches were on thin ice but expected to finish out the season. Fans of teams with bad coaches should take note: a well placed knockout punch from the very strong Packers can help end your misery with a head coach you can’t stand. 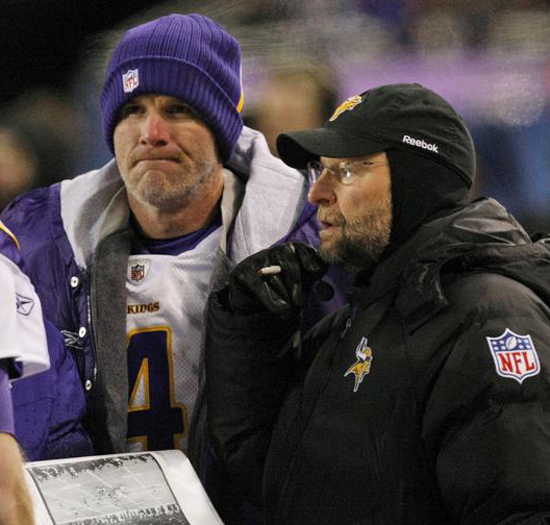 Chill in the Air: Things were never warm and cozy between Brett Favre and Brad Childress. Never.

This revelation probably caused you, like everyone else, to look forward to the Packers’ next game and see if they can make it three in a row. Unfortunately they face the Atlanta Falcons, who are definitely not ready to let Mike Smith go no matter what the final score is this weekend. However, there are some more potential targets on the Packers’ schedule. In two weeks, the San Francisco 49ers (1-9 as of this writing) represent a prime target, especially after entering the season as divisional favorites. One week later the Packers get to feast on the perennial snake bit Detroit Lions, and their head coach Jim Schwartz is on the hot seat 24/7 simply by default. Even the New York Giants toward the end of the season could be a possibility should they continue to struggle. Players seem to dislike Tom Coughlin already, so a poor season culminating in a Packers blowout may be all it takes. Someone should really look this up, because the Packers may be on their way to setting an NFL record for most coaches to be forced out in a season. 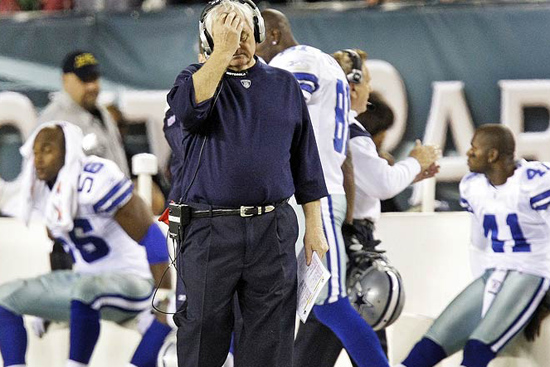 Woe is Me: Phillips knew his days in Big D were numbered following the 'Boys 45-7 trouncing by the Packers.

But getting back to this coming weekend’s game, it’s a great barometer for how the NFC will shake out this year. No coaches will end up in the unemployment line over this game, but right now the Packers and Falcons are two of the top teams in the conference. In a year where most agree there are few truly elite teams and everyone is jockeying for the top spots, this game could go a long way toward sorting out who rules the NFC heading into the stretch run. Not only that, both teams have divisional opponents breathing down their necks. This is a huge game as the winner is on the fast track to a race for the NFC’s No. 1 playoff seed. The loser, meanwhile, may be fighting just to keep pace in its division with a playoff spot not even guaranteed. It’s the definition of a must-win game when your season outlook can be so different depending on whether a single game goes down as a win or loss. The Packers need it slightly more if only because the Falcons have one more victory and the Bears are neck-and-neck with Green Bay compared to the Saints being just behind the Falcons. However if I’m the Falcons this is no time to let up with the Saints offense slowly starting to find its groove. You have to shut the door when you can, and from that perspective I’d be more worried about leaving the door open for New Orleans than I would leaving it open for Chicago.

The key matchup has to be the passing game. Matt Ryan is going head-to-head against Aaron Rodgers in a battle of two young albeit very good quarterbacks. Then there’s Greg Jennings and Roddy White clashing for the right to be called the NFC’s best wideout. No doubt it will be a star-studded shootout. From that standpoint it’s hard not to give the edge to the Packers. The Green Bay pass rush has been deadly, and you have to expect Clay Matthews and company to knock Ryan around at least a few times in this game.  In the secondary, veteran Charles Woodson has the ability to keep White in check. Of course keeping White in check means holding him to 70-80 yards and one TD, but that’s where the Green Bay offense comes in. The Falcons rank a measly 24th in the NFL against the pass, and if Donald Driver is healthy the passing game should be going full out. The Falcons will still get their points, but they won’t be enough to keep pace with a Packers offense that should be in line for a big game. My gut says the Packers prevail in a close, high-scoring affair; something along the lines of 38-31.

Either way, both teams are very good. The losing team will have to work a lot harder to finish out the regular season, but really both teams are looking like locks for a playoff spot. Even if the Bears or Saints win one of these divisional battles, both the Packers and Falcons should be right there for a Wild Card spot. Confidence is what will really be on the line Sunday. One team is going to come out of this game with a lot of swagger, and they will truly be feeling like the best squad in the NFC. Get full on that Thanksgiving turkey and enjoy the Thursday NFL action, but the real feast will be on Sunday. The Packers-Falcons clash for the main course sounds good to me!