While the jury’s still out on San Diego Chargers rookie running back Ryan Mathews, one thing’s for certain: he’s a gamer! A plow horse out of Fresno State where he racked up 3,280 rushing yards and 39 touchdowns over three seasons for the Bulldogs, Mathews landed in America’s Finest City earlier this year with big expectations surrounding his arrival. Not only would he be trying to fill the cleats of recently exited All-Pro rusher LaDainian Tomlinson, but he’d be representing San Diego’s football future. Pressure? Not really; just listen to the first-year standout explain his philosophy about making a name for himself in the NFL.

Beyond his calm, cool demeanor, Mathews is also quite proficient at signing autographs. Witness his latest works of art, courtesy of Upper Deck Authenticated. Either a signed football ($149.99) from the Chargers first-year player or a signed Chargers mini-helmet ($99.99) can be purchased at Upper Deck’s online store. Get ’em now before this guy is named Rookie of the Year! Through his first seven games of the season (he didn’t play against Seattle), Mathews has racked up 340 yards on the ground, 74 receiving yards and scored a pair of touchdowns. His two TDs, not coincidentally, occurred in two of the three Chargers’ victories thus far: 41-10 over Arizona on October 3, and 33-25 over Tennessee on Sunday. 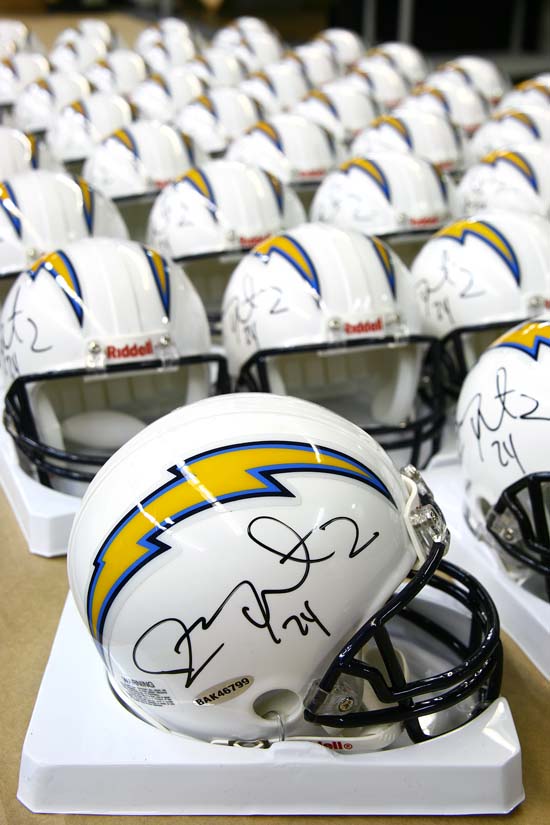