I remember when one of my best friends told me he made the decision to purchase season tickets for the San Diego Chargers, I was just thrilled. Truth be told, I wasn’t necessarily happy for him or the Chargers ticket office, but mostly for me. I knew that a couple times this season, I would likely get the call to join him for some of the games. I was so fired up that one of the calls came for the Monday Night Football showdown with the Broncos.

It was a game both teams needed, but the Chargers had the track record of getting hot in November over the last few years in particular. It seems like the NFL analysts pick the Chargers every season to be Super Bowl contenders, but they just get off to a terrible start they have trouble coming back from. Such is the case this season, but as they have done so many times before, they came out and took care of business when they needed to.

The Broncos started off with a perfect drive that had every Charger fan in attendance nervous. The Chargers roared back however with touchdown after touchdown and tenacious defense. Even their special teams looked good as they converted a fake punt for a key first down that helped swing momentum their way for good. Now the Chargers are poised for a real challenge as they head to Indianapolis to take on the Colts. As a Charger fan, I’m hopeful they can keep this hot streak going, which should be easier as they welcome back Antonio Gates and Vincent Jackson this week.

What really made the game memorable for me wasn’t just the score, it was all the fun of being at the game, especially a Monday night game. Check out some of the images I took in that made the evening so memorable. And special thanks to my friend Tom who will hopefully be calling me to join him again soon… 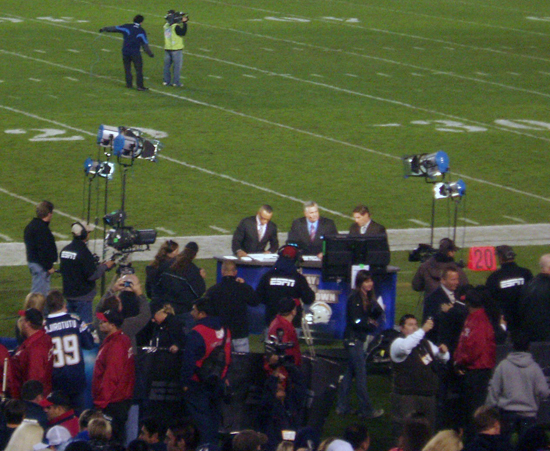 ESPN's Monday Night Countdown crew were set up right in front of us. 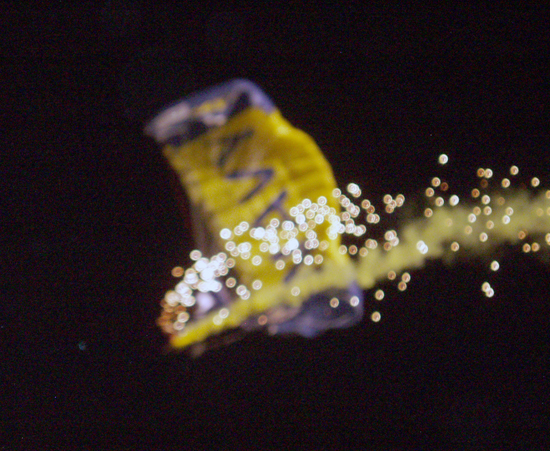 There were four sky divers from different branches of the military lighting up the sky to help kick off the game. 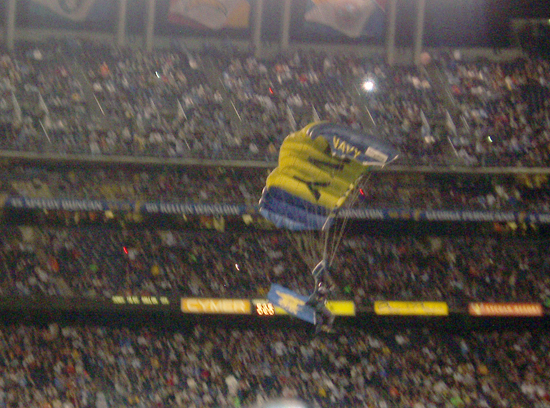 They narrowly missed cables as they flew into the stadium to a huge ovation. 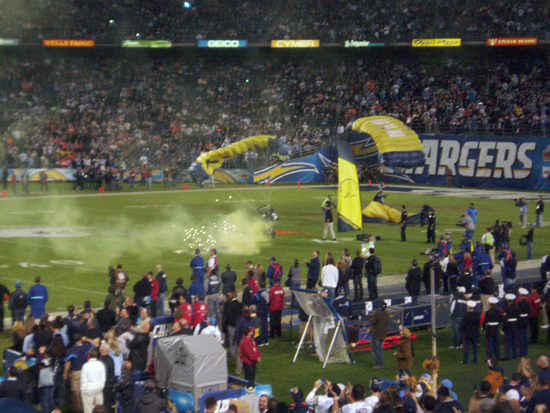 They landed right on target on the field. 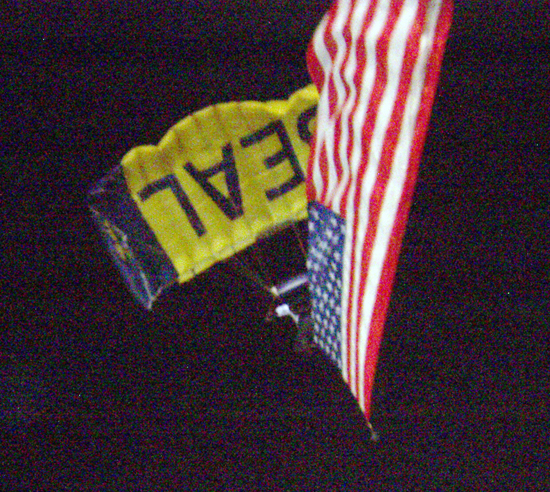 Land of the Free and the Home of the Brave. The final jumper had the American flag waving in all its glory as he soared into the stadium. 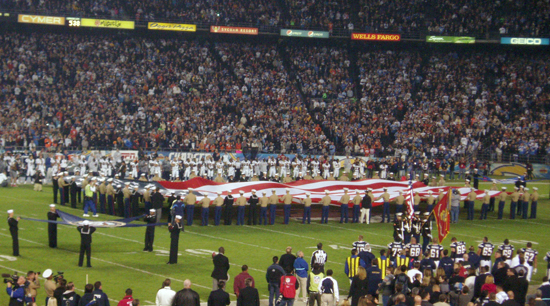 The marines from nearby Camp Pendleton assisted with pregame festivities as everyone rose for the Star Spangled Banner. 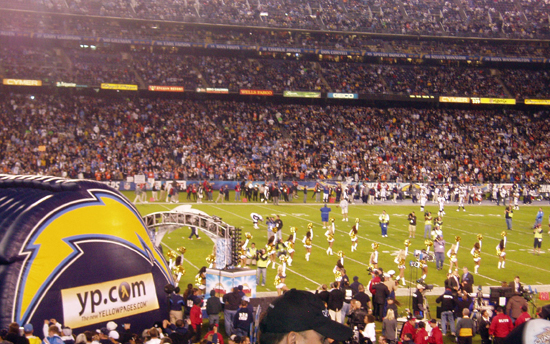 The Charger Girls took the field to help with the introductions. Men in attendance quickly grabbed their binoculars. 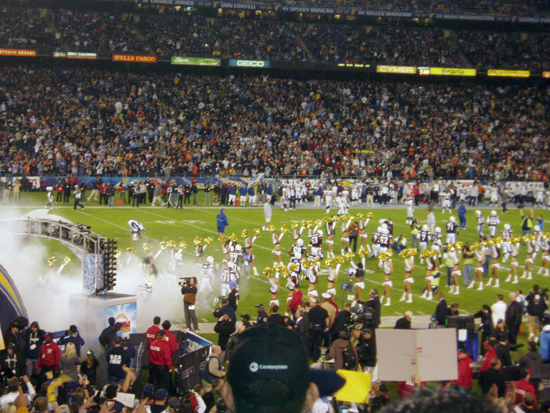 And here come the Chargers! 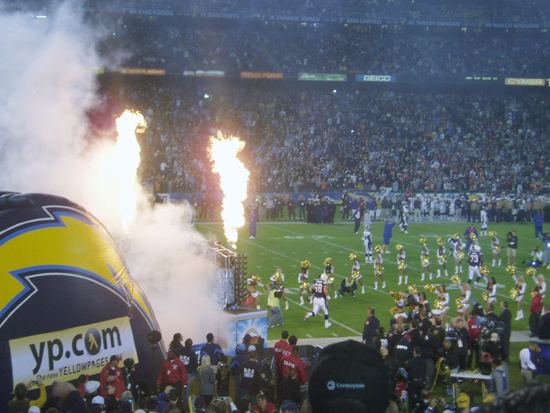 Flame on! Here come the starters! 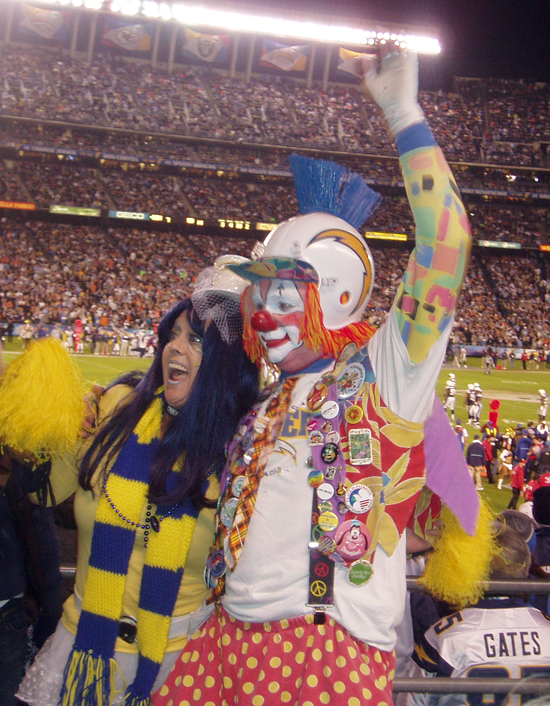 The great thing about Monday Night Football is people have all day to dress up for the game. A steady stream of crazies came by throughout the evening making it different than a normal game. 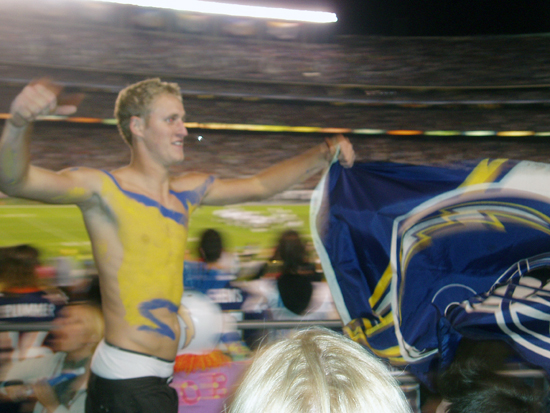 By having all day to get ready for the game, some people drank their way warm and ran around the stadium like escaped mental patients. What a scene! 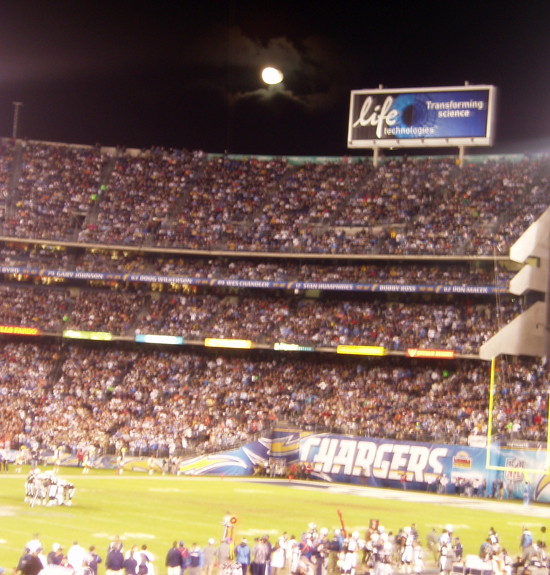 As the Chargers took control of the game, a bad moon rose on the horizon for the Broncos, who could just not get it going in San Diego.