In the next couple weeks we will feature two blog entries covering the highs and lows of the NFL season, starting with this piece on the AFC. We will have teams and players who have surprised for better or for worse, a mid-season MVP, and some predictions on how the season shakes out. 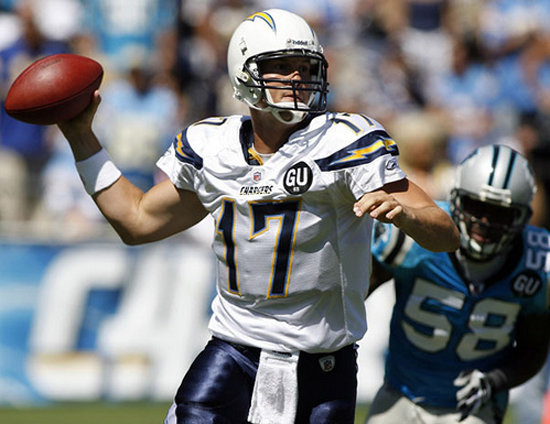 ON TARGET: Despite the standings, Rivers could still break a few records this season.

People knew this team was quietly getting better, but it’s come sooner than most expected. Former Patriots executive Scott Pioli, his big QB acquisition in Matt Cassel, and a mean ground game with Jamaal Charles and Thomas Jones have the Chiefs in a surprising first place in the AFC West. They aren’t flashy, but they are doing enough to win. The schedule only gets tougher, however, and in their biggest game to date they were handled quite easily by Indianapolis. Their only real upset was over the Chargers, and since San Diego has been a big enough disappointment that it’s not that big of a marquee win. It’s easy to make an argument that they will be falling back to earth any time now.

I am a Chargers fan. If you follow the NFL even casually, I have literally already said enough for you to know how bad things are for me. It’s been a comedy of errors, and everything that can go wrong has gone wrong, especially on special teams. Blocked punts and return touchdowns surrendered have been key components of every single Chargers loss, which is why the team is 3-5 with a top-flight offense and defense. Fortunately what that means is that if they stop making mistakes, they will start winning. You could argue the Chargers could be nearly undefeated if they had minimized mistakes. They minimized mistakes against Arizona and Jacksonville and destroyed those teams. They made some mistakes but fewer than usual last Sunday and were able to beat the Titans. If you assume they can fix their problems – and I assume a quality NFL team can do that – then this team should have no problem going on one of their patented late season winning streaks. Combine that with the KC collapse predicted above, and you have the Chargers sneaking into the playoffs once again, where Philip Rivers can go to work. Think the NFL’s version of the San Francisco Giants, quiet most of the season but coming alive late and into the postseason. 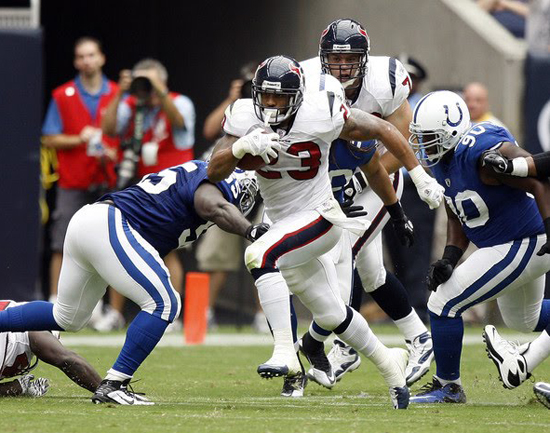 FULL SPEED AHEAD: Foster is Houston's workhorse in the backfield this season.

It’s impressive that he won such a major role coming into the season considering he was an undrafted free agent and had to compete with the likes of Steve Slaton. Slaton had been a disappointment but the smart money said it was at best some kind of timeshare while they tried to fix Slaton and get him back to what he was (albeit briefly) in the past. Instead the reigns were given to Foster, and he has responded by putting up elite numbers as a feature back. He does everything well from avoidance to acceleration to pounding it up the middle, and he can catch balls for good measure. He’s a big reason why the Texans are slowly getting better, and they could turn the corner in the next couple seasons with their passing game complementing Foster and vice versa.

Yes LaDainian Tomlinson was going to steal carries, the whole world knew it. But Greene represented a running back that carried his team to an impressive run last year. The Jets were all about the run with an inexperienced Mark Sanchez at quarterback, so for Greene to so easily hand over the reigns to LT comes as quite a surprise. Greene isn’t even a factor anymore and while LT and Sanchez have their moments, they need Greene to be successful. They may not be a Super Bowl contender anymore, and Greene’s downfall isn’t helping.

Whether Rivers was on my favorite team or not, I’ve never bought into the theory that MVPs need to come from a successful team. Stats and whether the player can carry a team mean more to me, and on those fronts Rivers is second to none. Despite the Chargers’ struggles and the fact that their WR core looks like an infirmary, Rivers is one pace to break the single season passing record owned by Dan Marino. Bet you didn’t know that if you aren’t paying much attention to a 3-5 Chargers team! Rivers was without his four, count ‘em FOUR, top receivers this past Sunday and all he did was throw for 305 yards and beat the Titans in a must-win game. This is why he’s getting some MVP buzz despite the bad record, and if the Chargers were anywhere above .500 he’s in the top three for MVP easily. If things come full circle with the record and Rivers keeps this up and helps spark a win streak, this MVP pick will look very probable. 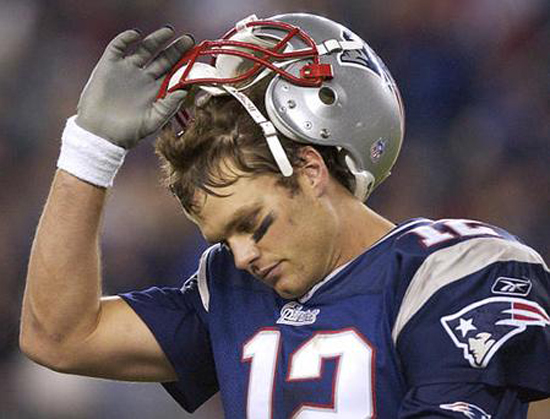 WHY SO GLUM? In the end, Tom Brady and the Pats usually find a way to win.

PLAYOFF PREDICTIONS:
New England Patriots (AFC East): Back to their old dink-and-dunk style that won them their first Super Bowls under Belichick and Brady, it’s still their division to lose. The Jets shutout courtesy of the Green Bay Packers only distances them from the pack in that division.

Pittsburgh Steelers (AFC North): It will be a slugfest between the Steelers and Baltimore Ravens, but the Steelers have been there before, and that experience will help them down the stretch. Ben Roethlisberger looks fine after his suspension, and their defense is among the best in the league. Like the Patriots, they have produced another solid team that at its worst will still be competitive.

Indianapolis Colts (AFC South):  It almost looked like their run of dominance was over early on, but they’ve righted the ship. Likewise the Texans and Titans looked like legitimate threats early, but that is looking less and less likely. They still have Peyton Manning, and they will be just fine. They aren’t what they have been in past years, but they’re good enough to make the playoffs.

San Diego Chargers (AFC West): Yes they will do it. Would you really believe they can’t after the past couple years? The Broncos are no threat this year, and nobody should be fully buying into what the Raiders and Chiefs are doing. Everyone knows the Chargers are a sleeping giant that is a few non-fumbles, blocked punts, etc., away from being a juggernaut. The Chiefs will collapse, the Chargers will catch fire, and everything will be normal in this division.

New York Jets and Baltimore Ravens (Wild Cards): The Jets will still do enough to make it, and I don’t trust other contenders like the Titans, Texans, and Chiefs to keep pace with them and the talent they stacked up over the offseason. The Ravens, meanwhile, are a very good team and if the Steelers weren’t so battle hardened I would pick them for the division. You can slot the Steelers here if the Ravens pull the divisional upset.

Some old-school matchups here with all teams you would expect from the divisional round on. Those are also hard games to pick. I expect the Chargers to beat whatever Wild Card team they face, and the Steelers should easily do the same. Each has a very tough away game in the divisional round, but both are winnable. At the same time the Colts and Patriots are so seasoned and well coached that my gut says they will be ready and waiting after their bye weeks for when those games come around. I have to give it to them for their ability and playoff experience. That leaves us with a potential classic with the renewal of the exciting Patriots-Colts playoff rivalry that was practically an annual event a few years ago. I have to give that game to the Patriots in the dead of winter in Foxboro. They are made for that kind of game, while the Colts have to leave their dome and they won’t handle it well.

Quite a bit should ride on the playoff seedings. As you can see I have New England as the one seed, the Colts at two, the Steelers at three and the Chargers at four. If those seedings switch around with a divisional game moving to say, Indianapolis or Pittsburgh, things could change. All these teams could use a nice breakout winning streak as home field advantage would be very useful.

Should be an exciting second half in the AFC as breakout teams try to maintain their pace and slow-starting teams try to reassert themselves. An NFC midseason review is in the works, expect that in the next couple of weeks and enjoy the second half of the season!