Pittsburgh here they come! Yesterday, upon hearing news of Upper Deck’s just announced “Collect the Set & Win” promotion whereby the first person to put together the company’s newly released 20th Anniversary hockey insert set would win a trip for two to the 2011 NHL Winter Classic in Pittsburgh, Jim and AJ Ramsay went right to work. Already avid hockey card collectors who routinely buy and sell packs, boxes and cases of product, the father-son duo were setting up at this weekend’s NHL Sports Card Expo at the Toronto International Centre when a passerby told them about Upper Deck’s promotion and grand prize. 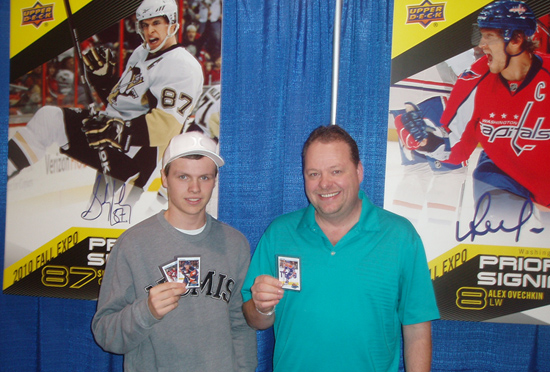 Having just purchased and opened 20 cases of Upper Deck’s 2010-11 NHL Series One product, which was only released on Wednesday, the Ramsay tag team was on the verge of completing the 250-card insert set simply based on their passion for collecting. Little did they know that an incredible reward was near.

“The last four cards we needed were all ‘Young Guns,’ so this morning we went out to all the dealers at the show to try and track down the last four,” said AJ Ramsay, who resides with his dad in Winnipeg, Manitoba. “When I got the last four cards, I was so relieved, but we just didn’t know if someone else had beaten us to the punch. We were so happy that Upper Deck was in attendance at the show so we could check.

“Once we confirmed with the Upper Deck team that we were the first to complete the set, and they verified it, we couldn’t believe it,” added AJ. “We’ve had some great pulls from Upper Deck products before, but we’ve never had anything like this happen to us.”

Now embarking on its 20th year of producing NHL licensed trading cards, Upper Deck wanted to make sure this year’s flagship Series One Hockey set held something extra special. Therefore, all of the 250 cards from the base set had a variation insert card produced in the inaugural 1990-91 design. Each 20th Anniversary variation card sported unique photography reminiscent of the shots used during that time while also being printed on the same vintage card stock. More limited than the traditional base cards, the 20th Anniversary variation inserts could be found at a rate of six per box. 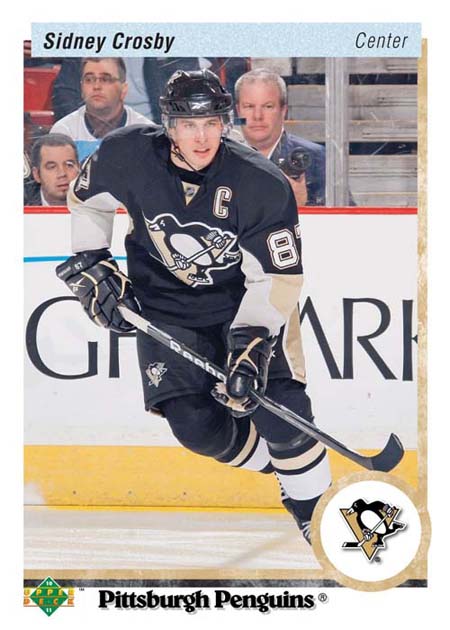 “It’s exciting for us, but I’m really excited for my son,” said Jim Ramsay. “He loves the Pittsburgh Penguins so to see them live [on New Year’s Day] is going to be a real thrill for him. I think it’s really nice to see a company offer its collectors this type of reward for completing such an impressive collection.”

The 2011 NHL Winter Classic, an outdoor, on-ice battle now in its fourth year, will be held at Heinz Field in Pittsburgh where fans will see Sidney Crosby and the Pittsburgh Penguins take on Alex Ovechkin and the Washington Capitals.

Now that the grand prize is spoken for, there are still four great prizes left for anyone able to match the Ramsay’s feat. The second and third collectors to complete the entire set will both win a 2010 NHLPA Rookie Showcase multi-signed helmet. The fourth person to collect the set will win a Taylor Hall-signed UDA Reebok stick, and the fifth entry to be received from someone who completes the set will win a Tyler Seguin-signed 2010 NHLPA autographed puck from UDA.

Collectors interested in participating in Upper Deck’s “Collect the Set & Win” promotion need to contact Upper Deck via e-mail at UpperDeckMarketing@upperdeck.com when they are within 20 cards of completing the set. Upper Deck will stay in contact with those collectors and provide directions on where to send their sets upon completion for verification purposes. Once verified, Upper Deck will begin announcing the remaining prize-winners in sequential order. Sets will be held by Upper Deck until all five prizes have been claimed.


congrats! what an awesome prize! I would like to try for the completion of the set, but dont have the budget for 15 cases! ha… but it would be fun to try.