A Pair of Diamonds in the NFL Rough

In a high profile sports league like the NFL, there are plenty of feel good stories over the course of a season. Michael Vick’s redemption crusade, LaDainian Tomlinson proving he isn’t quite done yet, and so on. Unfortunately, some great stories get swept under the rug since the media likes to latch on to only a couple of really big stories while not giving enough coverage to stories that are just as special. Two such players who come to mind that are just starting to appear more and more on everybody’s radar as they continue their emergence are Colt McCoy and LeGarrette Blount. Both are under the radar for different reasons, but they both are slowly playing their way into the limelight. If you claim to know the NFL, you need to know about these up-and-comers. 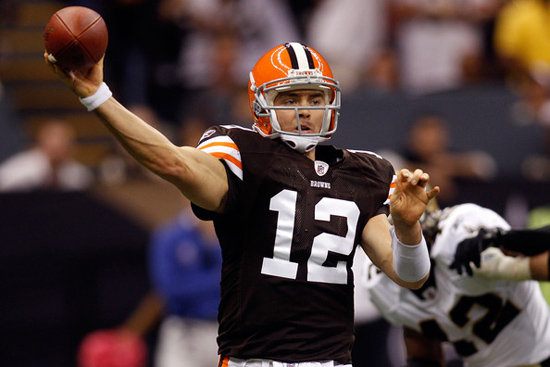 The Real McCoy: Colt has quietly emerged as one of the NFL's breakout stars this season.

Colt McCoy: It’s hard for an elite college quarterback out of big, bad Texas to hover under the radar, but McCoy managed to do it. Questions about his health, throwing style, and college offense all surfaced prior to the draft, and the Browns quietly snatched him up in the third round. Okay so it wasn’t that quiet since there was a camera with him on draft day and an ESPN reporter camped out next to him checking in on him all the time. Although, considering the hype attached to Sam Bradford, Tim Tebow, and Jimmy Clausen, the post-draft hype went to them and McCoy was forced to settle quietly into a reserve role in Cleveland. While Bradford and Clausen stepped into starting roles in Saint Louis and Carolina, and Tebow was making news in Denver as a goal line QB, McCoy was just plugging along in Cleveland. The future was bright, but he was buried on the depth chart of what was expected to be a pretty bad team, and the team had made it clear it was very unlikely McCoy would see the field this season. Attention was squarely on the other high profile rookie QBs, and for good reason. 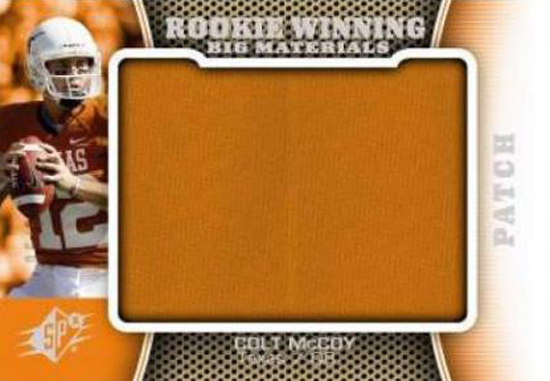 Winning Big: "Giant slayer" might become Colt McCoy's new handle after knocking off both the Saints and Pats in back-to-back starts.

But then everything changed. When opportunity comes you have to run with it, and with injuries depleting the QB depth chart in Cleveland and another poor season well underway, the Browns decided they had nothing to lose and turned to their QB of the future earlier than expected. And what a debut it has been! McCoy has already helped the Browns score huge upsets over the Saints and Patriots, and he helped take the Super Bowl contending Jets to the limit in OT. Looking at his stats he has actually had his highest passing yardage games in his two losses as a starter, and his passer rating has surpassed 80.0 in three of his four starts. It’s still very early, but he has come out of the gate looking very impressive, and he has put himself right back into the discussion of great young QBs with Bradford, Tebow, etc. He’s shown flashes of brilliance, and really only teammate Peyton Hillis’s star power and the fact that the Browns are treating McCoy so carefully can be blamed for his limited stats so far. When they start to let him throw more and more over the next year or two, he will grow and improve gradually a la Joe Flacco and Mark Sanchez. The talent is there and so is the potential, so it’s time to take notice. If you are the investing type of card collector who likes to get in on the ground floor with a guy before he blows up, you need to start collecting your Colt McCoy cards now. Wait any longer and you will end up paying a lot more as people start to take note of McCoy and the Browns with every upset victory.

LeGarrette Blount: If you thought McCoy’s story was exciting, it doesn’t hold a candle to the saga surrounding LeGarrette Blount. Even Michael Vick’s comeback could be challenged by Blount’s redemption story. Blount started out as a victim of having athletics take over his life at the cost of schoolwork. Even that didn’t pay off as he was only a two-star prospect coming out of high school who garnered little recruitment buzz. He landed at a Mississippi junior college after he did not qualify academically to attend Auburn, where he was attempting to become a walk-on. Two 1,000 yard seasons later and Blount was one of the top Junior College prospects in the country, garnering the national recruiting attention he had missed coming out of high school. Blount ended up at the fast-rising University of Oregon to play his final two years of college football as a Duck. 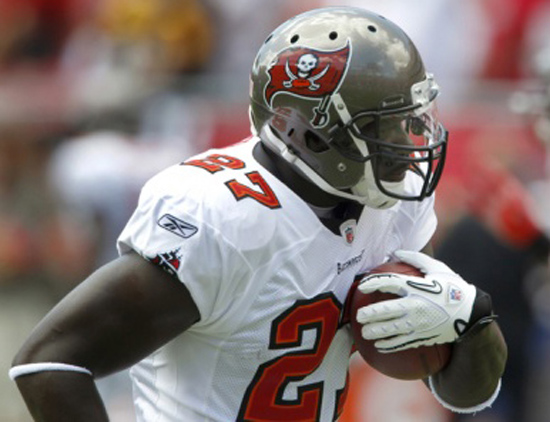 Redemption Time: Blount has worked hard to combat the criticism that has dogged him since his infamous punch heard 'round the world at Oregon.

His first season at Oregon saw him in his first timeshare as a running back but despite mixed feelings about it, he was able to set a school rushing touchdown record and eclipse 1,000 yards yet again. In the process, however, he clashed with then head coach Mike Belotti and suffered a couple of suspensions. Fortunately, Blount got his head straight and recommitted to his athletic career. He was reinstated by new coach Chip Kelly and the future looked very bright. Blount went into his senior season on many preseason awards watch lists, and he was on his way to becoming a high NFL draft pick. Of course when the future looked brightest, that was naturally where it all went wrong.

In the Ducks’ opening game against Boise State, Blount had a terrible game in the Ducks’ loss. This is when the infamous sucker punch occurred. Blount cold cocked a Boise State player when he wasn’t looking, causing outrage and a near riot during the postgame chaos. The initial verdict was that Blount would be suspended for the rest of the season, effectively ending his draft and award prospects. While he did end up being reinstated late in the season, there was nothing there to suggest he was still NFL ready. Plus even if he was, such a serious behavioral incident was career suicide in the modern NFL, especially since there has been a significant movement away from players with attitude issues by most teams. Naturally, Blount went undrafted in the 2010 NFL draft, but his raw talent did earn him an undrafted free-agent deal with the Tennessee Titans. Unfortunately Blount’s anger bubbled up again in the NFL, leading to a training camp fight in which he attempted to punch out a Titans defensive player (fun fact: I went to the same college as the player he tried to punch, former University of San Diego Torero Eric Bakhtiari). While the incident did not have the same effect as the nationwide drama created by his sucker punch back at Oregon, Blount was eventually placed on waivers before the regular season. However, he got a second chance when the Buccaneers saw something in him and claimed him off waivers. 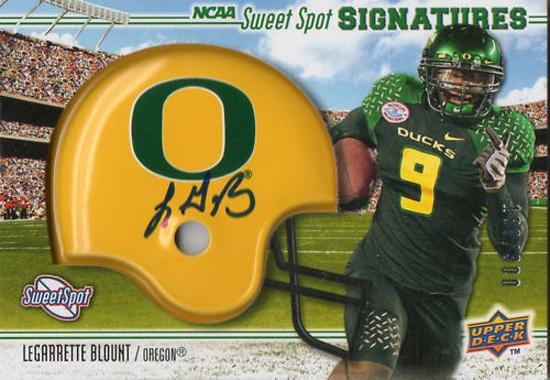 Bust a move: Now Blount is getting his name in the newspapers for all the right reasons.

Like McCoy, opportunity was created out of a seemingly hopeless situation. Buried behind names like Earnest Graham and starter Cadillac Williams, it seemed that if Blount’s NFL career was going to survive it would be as an emergency reserve. But then, Blount slowly gained steam. Cadillac Williams’ horrible season led to more opportunities for Blount, and he was making them pay off. Slowly but surely he was getting more and more carries, especially around the goal line. As a fantasy football player, I picked up on this much sooner than the average non-fantasy playing NFL fan. However, Blount was finally named the starter and forced everyone – fantasy players and non-fantasy players alike – to take notice. On Halloween, Blount went off for 120 yards and two touchdowns and he has been breaking impressive runs as the Buccaneers starting RB every week since with no signs of slowing down.

It’s been quite an impressive road for Blount. He had so much going for him, and one punch appeared to make it all vanish in a split second. And yet here he is one year later, exactly where people thought he would be before all this happened. If he has truly changed, which it appears he has, Blount is a fantastic story of redemption and second chances. Seriously, they give ESPY awards and make “30 for 30” TV specials about stories like this one. If he goes on to have a long and successful career, owning his cards will be very special. I’m thinking of diving into some Upper Deck Sweet Spot and SPx packs to see if I can’t score a piece of this great story.

Great players come and go, and it’s fun to enjoy them in their prime. However, sometimes guys come along who do things you didn’t  expect, and watching them with that feeling of disbelief makes them that much more fun to enjoy. The same goes for collecting their cards. Some of my favorite cards are my Josh Johnson rookie cards because he’s the only player from my school ever drafted into the NFL.  To you they may be worthless, but to me I would let go of some of my patch and autograph cards go before I let my Josh Johnson base cards go. A great back-story makes a card even more special, and both McCoy and Blount have those kind of early career memories attached to them that make them stand out from the myriad of other young players one could collect. That’s pretty special, and collectors and non-collectors alike should take note and try to follow these two special players.