Well we are not quite there yet, but the talk about extreme hits in the NFL and new penalties, including suspensions, seem to have everyone up in arms. This week the NFL levied a series of very large fines against defensive players from last weekend’s games and threatened suspensions in the future. The most interesting situation seems to be with James Harrison, a linebacker for the Pittsburgh Steelers, who has been extremely upset and frustrated over the $75,000 fine he received. He’s so upset that he is actually considering retirement if he cannot play the game the way he knows how.

Don’t believe me? I thought he was joking too when I heard him share this in an interview last night, but the Pro Bowl linebacker wasn’t at practice today and his agent said his client is “very serious” about retiring after being fined so heavily. His agent Bill Parise also said, “This is a very serious issue. James is very concerned about how to play football. If James is going to be fined $75,000 for making a legal tackle, then how do you go play football?”

We all know that the league is trying to do more to protect players, but there seems to be a double standard here. Did you know that the NFL was actually selling photos of the “illegal hit” James Harrison put on Mohamed Massaquoi this week and said today that it was “a mistake” they were up for sale?

Additionally, the NFL has been selling big hits as a key driver to consumers for years now. Every Monday Night, Chris Berman is on at halftime with the feature, “Jacked Up” where he goes through the biggest hits of the weekend. Mark Schlereth of ESPN was talking today about a video for sale on the NFL website now called “Maximum Impact” that just features some of these violent tackles. And do you remember NFL Blitz and Blitz: The League? You know, the NFL licensed video games where you could execute wrestling moves on players after the play was completed? Was that a good idea? 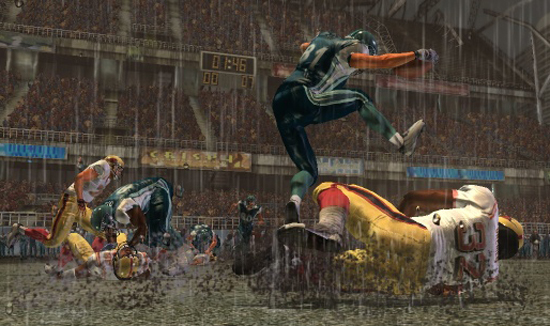 Heck, last season even we got in on it. Upper Deck had an insert set called “Crunch Time” featuring players like Harrison who are known to deliver the type of huge tackles that get fans fired up. We were giving fans what we believed they wanted and the insert set was approved by the NFL. 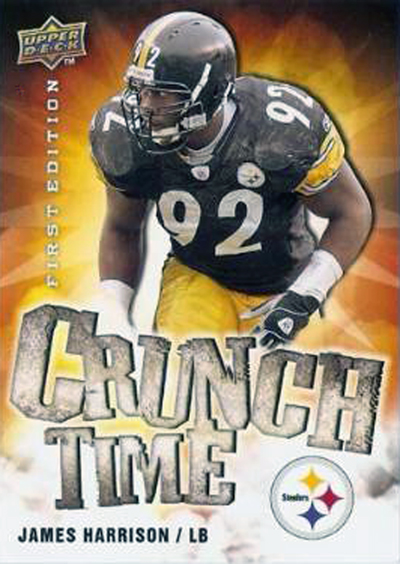 If the NFL is really serious about eliminating big hits and reducing concussions along with other serious injuries with their players, they have got to change their paradigm on how they market the league. And more than anything they need to educate players and fans that hard hits like this come with serious consequences. They are not necessarily something that should be celebrated and certainly not emulated. While they can be a big part of the game, they are very dangerous.

The NFL should feature hits that have gone wrong during the halftime of games each week. Unfortunately, they happen all the time. An amazing athlete can find themselves without the use of their body from the neck down in a split second. I would likely start with the viscous hit Eric LeGrand of Rutgers put on a player during a kickoff and tragically found himself partially paralyzed.

Interviewing players that have lost the use of their body and sharing that with other players in the league will hopefully encourage them to spend more time on technique, rather than just getting faster, stronger and bigger. In the meantime, I think it is unlikely Harrison will retire. I don’t think the league will suspend any defensive player this year either. They are trying to send a message to the players, but they need to look at the messages they have been sending to the fans for years as well.