It was an exciting day here on Tuesday, Oct. 5, as we welcomed San Diego Chargers rookie running back Ryan Mathews to Upper Deck headquarters for a autograph-signing session. As a fairly new member of the Upper Deck family, this was my first run-in with a sports star, and it was a great experience.

For those of you not familiar with the sports industry, it’s very competitive from a job standpoint. Every sports fan would love to work in sports and be around what they love every day, but it’s tough to get that chance. Much of the time the industry reflects the same hard work that comes with working in any area of business, but it is instances like meeting a sports star like Ryan Mathews that make it all worthwhile. Moments like this one are the exact reason why we put in the time to make it in the sports industry despite the hardships that can come with it. How many people can go to their office on a given day and expect a star athlete to stop by? Not many and that’s what makes working in sports so fun and exciting.

You could feel the anticipation building in the conference room as the mini-helmets and footballs were all laid out, waiting for Ryan’s signature. Ryan came in looking quite friendly and very much healed from his recent ankle injury. Before I knew it I was shaking his hand, doing my best to contain my excitement as a Chargers fan. In addition to working at Upper Deck, I am studying for a Masters Degree in Sport Management, and they drill it into us that when working, you act like a professional and not a fan. I calmly shook Ryan’s hand and tried to hide a smile, knowing I was meeting a first round draft pick and the biggest rookie for my favorite football team.

Ryan was very friendly and laid back, answering questions as he signed item after item. He was very open and willing to talk, commenting on everything from his ankle to rookie hazing to replacing Charger great LaDainian Tomlinson in the backfield. You can see Ryan answer some of these questions, submitted by Upper Deck’s Facebook fans, in the video above. There were some great off camera moments as well, including laughing about how someone in the room had just this week traded Ryan in his fantasy league to someone else in the room. It’s quite a funny situation when the guy you traded is right in front of you!

We also enjoyed watching Ryan open a pack of the Upper Deck 2010 NCAA Football Sweet Spot cards. He appeared to like them very much, picking out some of his favorites to take home including a Brett Favre jersey card, cards of his favorite fellow NFL players like Ray Rice and Percy Harvin, and of course his favorite card of one of his idols, LaDainian Tomlinson. You can see that video below, and all these videos plus more are available on our UDVids channel on YouTube.

The day finished with my favorite part, a chance to snap a photo with Ryan. That’s me and Ryan below. Many thanks to Terry Melia for suggesting we do it. It’s an odd situation since it’s technically a work environment, so I didn’t want to jump up and try to get a picture. Terry, in his role as UD’s Public Relations Manager and knowing I am a Charger fan, was very kind to step up and make that happen. It was nice to be a fan for a bit and have that memory of a great Chargers fan experience.

Ryan was a class act the entire time, very polite and willing to do whatever we needed him to. I look forward to rooting for him to succeed on the field the rest of this season and in future seasons, and I will always remember for the rest of my life the day I got to spend a little time with a star from my favorite team. It’s all thanks to working hard to make it in the sports industry, and it has inspired me to continue to work and improve so that Ryan won’t be the last athlete I get to meet! 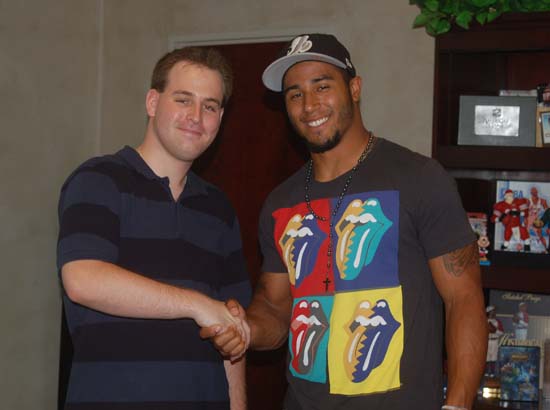 Grip and Grin: Meeting Ryan Mathews was a dream come true for the author.