As the 2010-11 NHL season gets ready to close out its first month of action, the Florida Panthers are already 3-3 on the young season and looking to make a serious impact in the Eastern Conference. And two of team’s top prospects, rookie goaltender Jacob Markstrom and defenseman Erik Gudbranson, recently tested their acting chops with Upper Deck during last month’s 2010 NHLPA® Rookie Showcase photo shoot in Toronto. Working alongside Upper Deck staffers, Markstrom and Gudbranson participated in a “Media Training” skit in which they had to battle various obstacles on their way to granting a persistent reporter his interview.

The vignette, entitled “Rookies Learn Tips for Media Interviews,” is the third of several video entries Upper Deck collected with many of the 23 participating rookies. Watch Markstrom and Gudbranson improvise at Upper Deck’s Rookie Boot Camp to still provide the interview no matter what the hurdle that’s facing them. 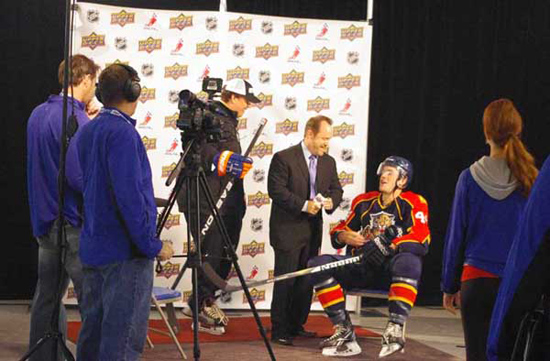 Upper Deck plans to post a new video segment every few weeks as the season progresses. The first video included prospects Mats Zuccarello-Aasen and Ryan McDonagh (N.Y. Rangers), Calvin de Haan (N.Y. Islanders), and Joe Colborne (Boston Bruins) and can be seen below, as can the  second video which showcased a trio of Edmonton Oilers rookies Taylor Hall, Jordan Eberle and Magnus Paajarvi alongside Nashville prospect Jonathon Blum learning how not to throw each other under the bus during a media interview.

Look for cards of many of the upstart rookies first appearing in Upper Deck’s 2010-11 Series One Hockey release in mid-November.