Up Close at the 2010 NHLPA Rookie Showcase 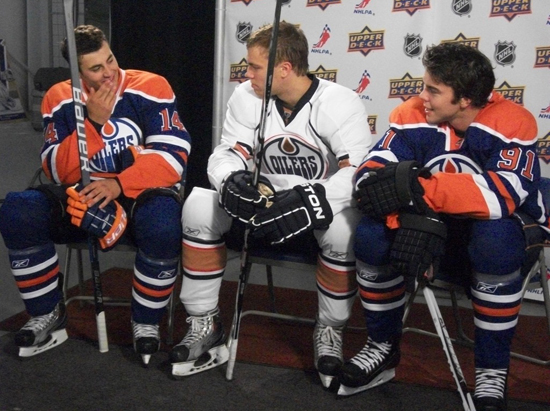 Number one overall pick in this past year’s draft, Taylor Hall, along with 2008 pick (22nd overall) and defending CHL Player of the Year, Canadian World Junior superhero Jordan Eberle and 2009 10th overall pick Magnus Paajarvi-Svensson (who recently dropped the Svensson part of his last name) highlighted the three up-and-coming Edmonton Oiler stars. All impressive in their own right, they are all hoping to be key contributors as the Oilers look to turn their franchise around. Should be a fun year collecting for these three high-profile players. Looking forward to seeing key rookies like their young guns, future watch autographs and probably something neat with all three on them. Do I smell a “Sign of the Times Triple” in their futures?  Might be a bit early to tell for sure, but that would be a great card for Edmonton Oiler fans. Look for the same with the Boston trio of Tyler Seguin, Zach Hamill and Joe Colborne.

Having a unique opportunity to be at this event was not lost on me. I was able to meet and talk with many of the future stars of the league.  I may be getting older, but these kids sure seemed young! Watching their on-ice skills was impressive to say the least. Tomas Tatar of the Detroit Red Wings stood out as a player with flair. He is someone who really wants to please the crowds. Ryan Johansen is another player who seems anxious to prove he is ready for the next level.  Comparisons to Joe Thornton have set the bar high, and he hopes to use his vision and hockey sense to become one of the elite playmakers in the league. Three players in particular impressed me with their size:  Joe Colborne, Erik Gudbranson and Jacob Markstrom. These kids have NHL-ready bodies, and once they fill out even more, will most certainly be “man wall” worthy. They carry presence. 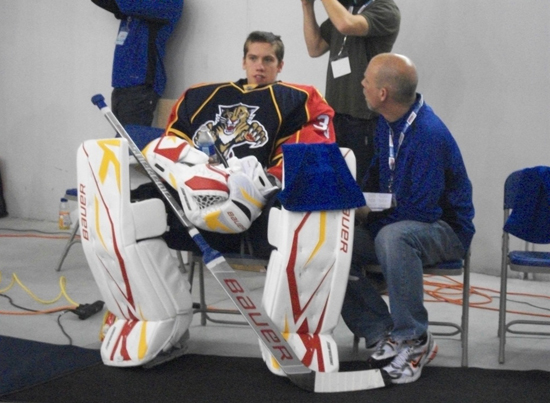 The kids are all very well spoken, a testament to the fact they have been elite athletes their whole lives and have always been the “next big thing” in their respective towns. They are on the cusp of making their families and friends all proud. Several of the young stars spoke of their respective father’s influence at a young age, driving them to early morning practices, and getting them to tournaments. Mom’s roles were not lost either, always being there at games, and having snacks ready for them.

In the end it was a lot of business as photos had to be taken, autographs needed to be signed and the day was not without obstacles. The main arena was flush with heavy fog at ice level. It was certainly warm outside that day, so it played a role. All parties involved quickly moved much of the on-ice components to another rink in the arena, where fog wasn’t an issue and got down to business. It was good to see everyone make such smooth adjustments over the course of the day any time a new hurdle presented itself.

One thing that was great to see was Upper Deck hosting winners of various contests as well. They were able to give lucky kids (and a few lucky adults) a chance to be a part of the day, hosting them at the event. Some lucky kids were even able to mix in with the young stars in some of Upper Deck’s soon-to-be-unveiled video skits.  It was good to see smiles on their faces.

This year’s rookie class has a lot of potential. Not only are there this year’s top picks, the top four of which were all at the event (Taylor Hall, Tyler Seguin, Erik Gudbranson and Ryan Johansen), but also high-end prospects such as Nazem Kadri, Braden Schenn and Jordan Eberle. Sixteen other top-end talents were also there and we look forward to seeing their first live rookie cards.  One thing that is not lost on these kids is the hobby; many of them collected at a young age, and they understand that the hobby is big business, from the young kids opening up packs of hockey cards to the adults who buy looking for the big hit. They all had their heroes growing up, and they hope to comprise the next wave of hockey heroes.

Congratulations to all who made the event such a success: the NHLPA reps for being accessible; the players who were more than willing to talk; and to Upper Deck officials for making themselves available to discuss the upcoming season. They were all able to promote the game and the hobby in a very positive light. This is my first musings from the event, but look for a full report including in-depth interviews with a variety of the stars in “The Insider’s Edge” (www.insidersedge.net). It was a great day for me as a hobby enthusiast, and I hope to get another invitation to cover the event next year.

Christopher Carmichael has been hockey fan of over 20 years. He has been an active member on various hobby related sites, most notably www.hobbyinsider.net, and www.cloutsnchara.com. A long time collector, with a focus on a few select player collections, and the occasional set projects. As well as blogging for Upper Deck, he is an occasional contributor to “The Insider’s Edge”, as well as the Clouts ‘n Chara blog as well.