I will feel no pain if/when the San Diego Padres do not make the playoffs this year despite spending what seemed like the entire season in first place in the NL West. As usual, I bought into the hype this year, as I do every year. It was too exciting not to. Of course I was skeptical pretty much the whole first half of the season, and with good reason. 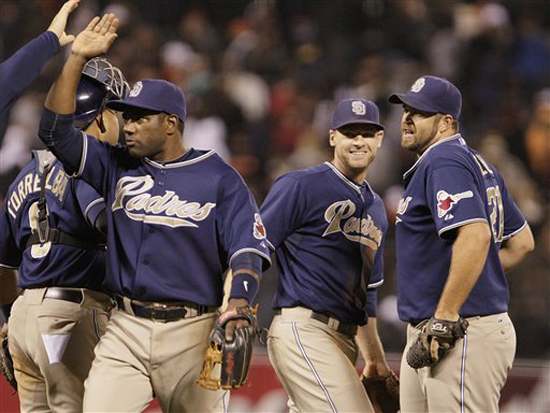 Will the Padres win the NL West? One more week of play and we'll all know the answer.

How could a team in full rebuilding mode really be this good when they couldn’t do anything the years they were actually supposed to be good? How did guys like John Garland and Kevin Correia go from back of the rotation innings eaters to carrying the rotation? As much as I like Mat Latos, how was he already producing Cy Young numbers at his age? When did Mike Adams become a premier setup man? And of course, the million dollar question: How do you win when you can’t score any runs? These were the things I wondered, but with a smile on my face as the wins continued to roll in despite these glaring questions. 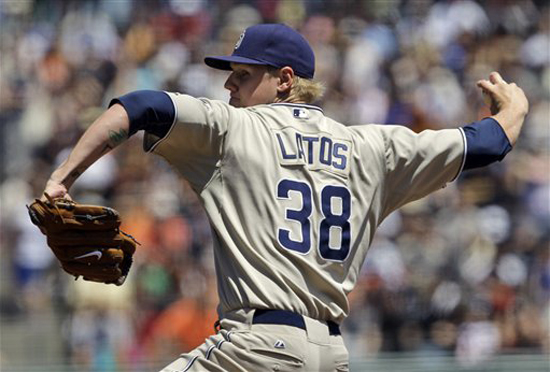 Righthander Mat Latos has been steady all season long with 14 wins heading into the final week.

And yet, any good fan saw this collapse coming. When the team built a nice lead with a little more than a month to go, I thought we could survive a minor setback or two. I knew it was coming with such a reliance on pitching. The arms were destined to start breaking down, and that’s exactly what we are seeing. Latos is tiring, and I would hate to see him ruined long term from being overworked. The bullpen is also feeling the effects of overwork. The once unstoppable back end of Luke Gregerson, Adams and Heath Bell is not a sure thing anymore, and that’s big when you have no offense and are built to win games 1-0, 2-1, etc.

Speaking of no offense, I loved the deadline moves of Miguel Tejada and Ryan Ludwick. Both were upgrades at spots where the team needed it most, and they are providing some much needed lineup protection for Adrian Gonzalez. However, they aren’t over-the-top acquisitions, and the offense has not seen much improvement with them. Despite some good moments, the fact remains that Tejada is old and Ludwick is not elite enough of a hitter. They are good and can help a team, but such a limited payroll means you can’t go after the big name or two that the team needs to really make it to the next level.

Now it’s not all gloom and doom. Having four games against the hopeless Cubs this week should prove helpful, and the team controls its own fate as I fully expect the final series against the Giants this weekend to decide the division. Not only that, the NL West has finally reclaimed the Wild Card. This means both the Padres and Giants may make the playoffs, which is fine by me. No, the problem comes after the regular season. You see, it’s hard to root for a team that has no chance of winning it all. I’m not saying we have to be the favorites for me to get excited, but I’ve seen enough borderline playoff teams come out of San Diego to know that this team is on par with that level. They are built to be a very good team, but still will fall well short of being elite. Can we get past the Reds? Maybe. Can we get past the Phillies or Braves? I doubt it. Could we get past the Yankees or Rangers or another AL squad if by some miracle we make the World Series? No chance; that’s a sweep waiting to happen.

Making the playoffs is always nice and anything can happen once you get there, but let’s be realistic. The Padres could have wrapped this up a month ago, but would you be willing to peg them as World Series champions or even the NL Pennant winners if they had done that and won 95+ games?

Some of you might be looking at me as a bad Padres fan now, considering this post has been pretty negative, especially considering it’s written by an actual Padres fan. It’s not like I want all this to happen, I just have a pretty good idea of what to expect after all these years. If we make the playoffs, I know from experience we will be lucky to get out of the first round, especially considering that these last couple months have proven that the Padres aren’t an elite team. I also wouldn’t be surprised if the Giants sweep us and knock us out of the playoffs completely. Do I hope it won’t happen? Absolutely, but I’m more excited about our young talent and how we can continue to build for the future. It will help to ease the sting when the season ends much earlier than anyone would have predicted a few months ago.  That being said, any MLB fan should be watching the Padres this weekend for a wild final series with San Francisco. That’s my World Series right there, and it’s always nice to disappoint an NL West rival!