Is the Michael Vick of Old Back?

As a sports fan, there’s nothing quite like the excitement that goes along with the opening weekend of college and pro football. It is kind of like a hug from an old friend. Given I am a huge sports fan, please take a moment to imagine my frustration when I found out that I would be spending all of my Sunday at an internet marketing seminar. And while I love to learn tips and tactics to hone my skills at my profession, I prefer to do those during work hours and if I have to work weekends, does it have to be on the same Sunday that pro football starts? It reminded me of the time when a friend invited me to his wedding – which I thought was awesome – right up until I found out it was scheduled for Super Bowl Sunday. Who does that? 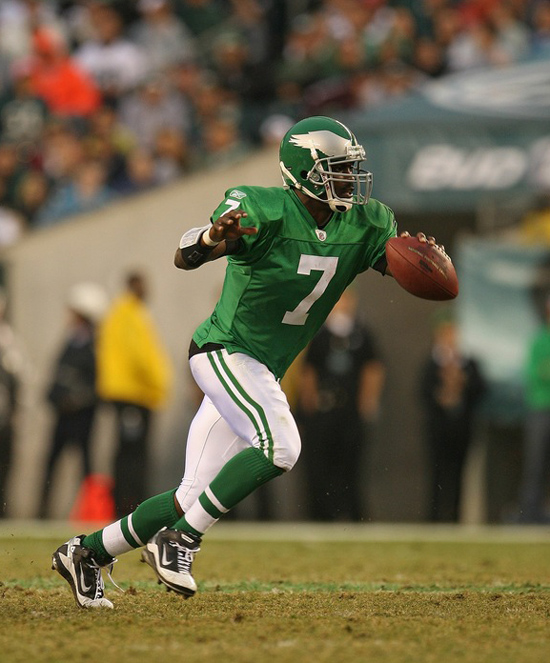 When he wasn't shredding Green Bay's D with his feet, Vick passed for 175 yards through the air.

I asked a couple of my buddies to provide me with text updates on how my fantasy team was faring yesterday. But they never came, so I began obsessing about whether or not to “defriend” them on Facebook. When our two-hour afternoon break finally arrived, I was like a motivated Randy Moss on a fly pattern straight to the hotel lounge so I could see what was happening.

The Eagles/Packers game was on, but something just didn’t seem right. Philly’s QB Kevin Kolb, who was drafted in my fantasy league before proven veterans like Matt Ryan and Brett Favre, wasn’t playing. After I found out from the bartender that he was pulled after sustaining a concussion, courtesy of Clay Matthews, I spent the next couple of hours going on a trip down memory lane with none other than Michael Vick. Kolb’s replacement. 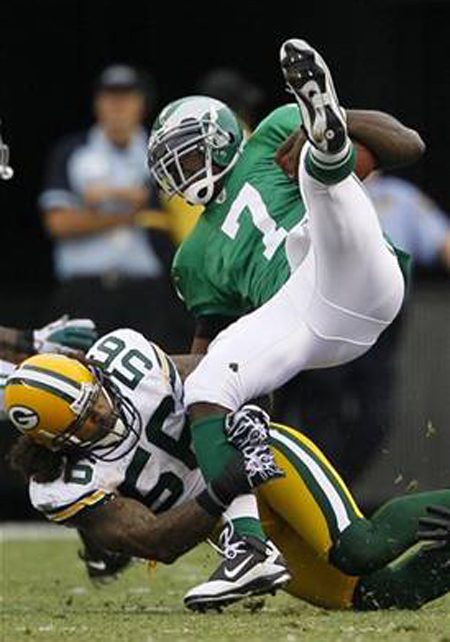 Michael Vick proved to be elusive on Sunday, rushing for 103 yards against the Pack.

I couldn’t stand what Michael Vick did off the field, but there was always just something so awesome about watching him play on the field. Like many great athletes, he was special because you never knew what he was going to do next. You just had to see it to believe it. And here I was, seeing it all over again, amazed as he danced around would-be tacklers and helped lead the Eagles back against the Packers, who are considered a Super Bowl favorite this year. The only thing was missing was Vick’s dark visor that he used to wear during his playing days in Atlanta.

But for Vick it ended in a very bittersweet way. He was unable to convert a fourth-and-one at the Packers 42 that would have given the Eagles a chance to tie the game in the fourth quarter and potentially win it. That is actually a lot like how things used to end during his days in Atlanta too – amazing performances, but heartbreaking losses.

Will there now be a quarterback controversy in Philly? Not according to Andy Reid who said after the game that Kolb will be the starter when he is healthy enough to play again. But he’s got to say that right? Vick certainly is a polarizing player with so much talent, but has such a tragic history of making horrifically wrong decisions when he’s not playing football. It seems as though fans, especially in Philly, are willing to forgive Vick. As a sports fan, I’ll just enjoy watching him play when he gets the opportunity to play again because one thing is clear to me: the Michael Vick of old is back.