George Blanda: Thanks for the Memories

There are certain things that remind me of my father. And plenty of them involve sports. Yesterday’s passing of NFL Hall-of-Famer George Blanda was another one that made me think of my dear, departed dad. He and Blanda were contemporaries; Blanda was born in 1927, my father a year later. We were never Oakland Raider fans – stubborn New England fans instead – but I can remember watching plenty of games on Sunday afternoons with my dad where Blanda would come in and kick the game-winning field goal for the silver-and-black. His performances were like clockwork. But the most impressive thing was that he was 46 years old and still doing it. My dad got a kick out of that, no pun intended. 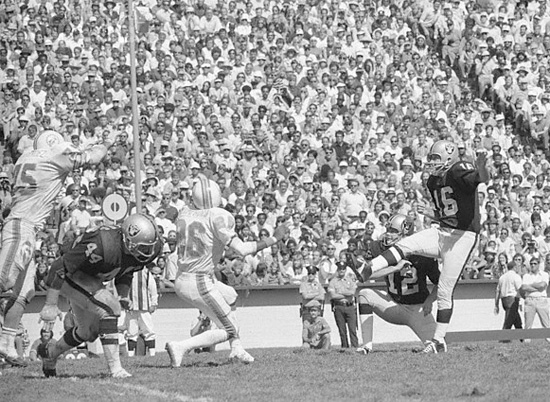 This was a familiar sight: Blanda drilling yet another field goal for the silver-and-black.

Come to think of it, the number 46 holds a special kind of significance in our lives. It was in April of ’86 when a 46-year-old “Golden Bear” named Jack Nicklaus claimed his sixth and final Masters championship. That was another crystallized moment where I can recall my father doing his own version of Tiger’s now-famous fist pump as he cheered Nicklaus on to victory. It was one more triumph for the over-40 crowd and my father, 57 at the time, loved it. He liked cheering for the underdog (like his Patriots), or the elder statesmen like Blanda and Nicklaus. As for 46, it was also the number I wore during my first season of Pop Warner football in 1971, and was the jersey number my brother Tim wore during his senior season at Harborfields High School in the fall of ‘75. And to this day, it remains one of the numbers I fill in whenever I play Lotto.

My father, Tom Melia, died of a heart attack in 1989 at the age of 61. He was the biggest sports fan I knew. A native Bostonian, he brainwashed each of his five children to cheer for all teams from Beantown despite that fact that we lived the majority of our formative years on Long Island. Dad could persuade people like that. He was a jolly sort who could get you to come over to his team despite the push-back we might get at school. I was growing up in the middle of Yankee country cheering for the Red Sox and guys like Carl Yastrzemski, Carlton Fisk, Fred Lynn and Jim Rice. My allegiance to the Celtics – despite the overabundance of Knicks fans surrounding me – was an easier pill to swallow since they were winning titles around that time (1974 and ’76). Truth be told, the Knicks won it all in 1970 and ’73, but they haven’t won a damn thing since. The Red Sox, meanwhile, were just breaking our hearts year after year, even though the 1975 World Series remains the greatest Fall Classic ever. It was really sad watching Yaz pop up for the last out of Game 7 against the Reds, but it was one helluva ride that I shared with my father. 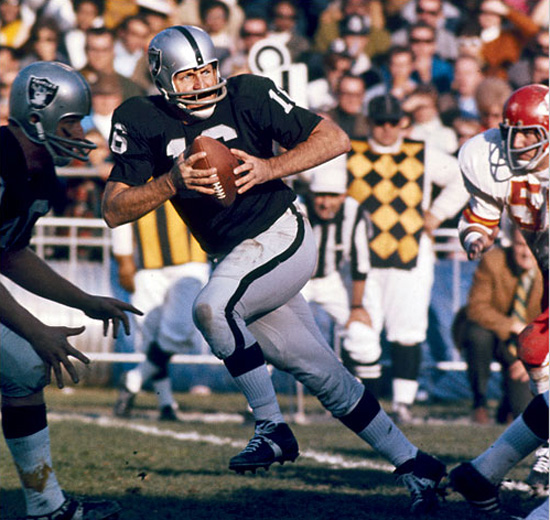 As for Blanda, he was a throwback player during the NFL’s coming of age in the 1970s under Commissioner Pete Rozelle. He started his NFL career with the Chicago Bears in 1949 and played for three more teams (Baltimore Colts, Houston Oilers and Oakland), over three more decades, before hanging up his cleats in 1976 at the age of 48. He played quarterback as well as kicked field goals and he did both with equal aplomb. He remains the oldest player in NFL history to start at quarterback in a championship game; in 1971, at age 43, he started for the Raiders against the Baltimore Colts in the AFC title game and threw for 217 yards and two touchdowns. The Raiders lost the game, 27-17, but Blanda had defied the odds once again. For his career, he threw for more than 26,000 yards and 236 touchdowns. Oh yeah, and he kicked 335 field goals and 943 extra points. In fact, he was the first player in NFL history to score more than 2,000 career points.

Blanda died on Monday, 10 days past his 83rd birthday. My dad would have been 82 in November. I thank them both for the memories.