Usually we do a Brag Photo of the Week highlighting some of the unique items that come into Upper Deck headquarters, but this week we also have a Brag Video. We recently received in the 2009 SP Legendary Cuts Mystery Cut redemption cards. An authentic cut signature of a deceased sports legend, entertainer, politician, or personality is embedded in each of these rare collectibles.

Since this marked the last Mystery Cut program for Upper Deck, we sourced for some of the best and most unique cuts available to include. A lot of time was needed to find cut signatures that were not only authentic, but that would fit in the cards. This week the cards finished production and many have been received by Upper Deck already. Here is a look at some of the more unique cards in the set we have received thus far: 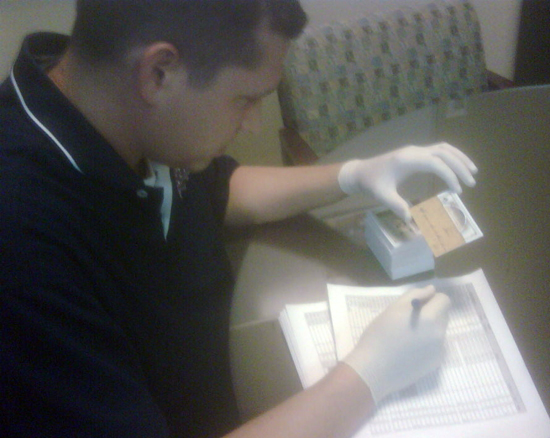 Upper Deck senior staff inspect each card to confirm there are no defects and then each card is recorded as being received in.

Next up, the cards will be sequentially numbered, placed in protective holders, packaged and randomly sent out to the collectors who have been waiting for these special items. No doubt many of these collectors will be anxiously waiting for that special mail day from Upper Deck where the “mystery” will be revealed and they’ll know which cut signature card belongs to them.


Quality product as expected, can’t wait until you pwn Topps in MLB and NFL again.


wow, it looks like this senior staff member is hard at work…good job J.


Wow!!! I do not even collect hockey, but I appreciate every sport. This looks like a very phenomenal product, and anyone would be very luck to get their hands on any one of these cards that have been shared on this blog!! Awesome product!!