Each month Upper Deck spotlights one of our valued collectors to showcase their collection. The great thing about sports collectors is that they are all very different in what they collect, how they collect and what they do once they have their items. But they all share a passion that is seldom found in any other group. This month we feature a die-hard UNC fan named Adam Malin from Texas.

Adam started collecting when he was just 10 years old. It was 1986, a good time to be a sports fan in Texas as the Astros played the Mets in the NL Championship and the Rockets went to the Finals against the Celtics. That road to the Finals propelled Adam into collecting basketball cards and by the early ‘90s he had become a big fan of Michael Jordan. He amassed over 3,000 Jordan cards and eight Upper Deck Authenticated framed jerseys.

As time went by, Adam started collecting other favorite players and eventually put together an amazing collection of Upper Deck cards showing Marvin Williams. When we asked Adam what got him into collecting cards of Marvin Williams, here is what he had to say:

“I was always a big North Carolina fan because of Michael Jordan, but I also followed players like Vince Carter, Antawn Jamison, Rashad, McCants, Shammond Williams, Jerry Stackhouse, Ty Lawson, Tyler Hansbrough and more. I guess I was interested in Marvin Williams because his jersey number [24] is just one away from Michael Jordan [23] and both guys hit shots that would lead UNC to a national championship. 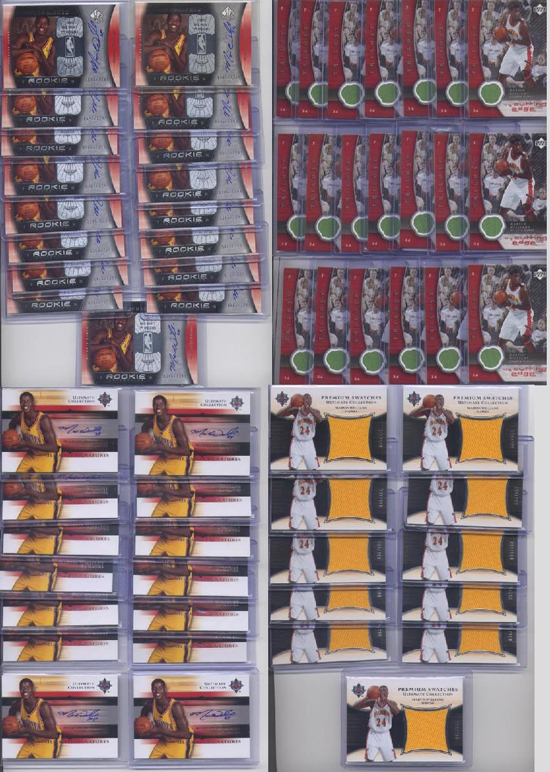 When it comes to Marvin Williams, Adam has the market cornerned.

“I began collecting Marvin Williams really hardcore. I had 60 of his 2005-06 Exquisite cards and tons of other autographs, patches and printing plate cards. The 2005-06 SPx Winning Materials cards were always my favorite though, so I decided to really go after those cards. 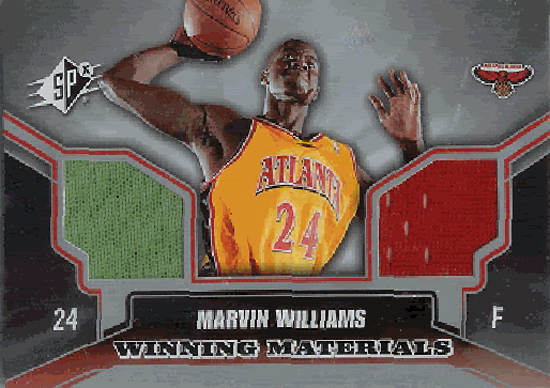 Have you seen this card??? If so, Adam is looking for it. Do a collector a favor and send it his way!

“The first time I saw the 2005-06 SPx Winning Materials cards, I really fell in love with the design. I liked the layout, the use of two jersey swatches and the photo that was used for Marvin was a really cool image of him going up for a dunk. I started with a goal of collecting 24 of the cards hoping to get all the different color jersey combinations I could find. That goal of 24 turned into 50, then 100, then 200, then 250. I wasn’t sure how many were produced so I kept going after more as I found them. Three hundred became, 350, then 400 and I just hit 500 last week. Currently I have 502 of these cards. 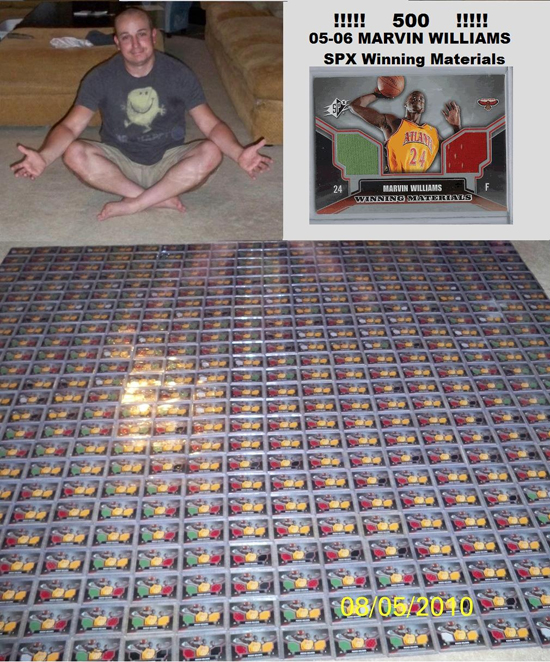 WOW! Look at them all! He really could use these to wallpaper a room.

“I got them all from card shops, eBay auctions and countless other helpful collectors from online trading card communities. I can honestly say I easily got at least 100 of these cards for free from generous collectors all over the world who heard about what I was trying to do. It has been really exciting to get packages from people I don’t even know from countries like New Zealand, Germany, China, Japan, Canada, Switzerland, The Philippines, Turkey, Holland, Italy, Spain and more. I also get e-mails from collectors who see the cards at shops and shows; it’s really cool how technology helps collectors reach their goals. People’s generosity in this hobby really amazes me sometimes.

“You have to be a little crazy to try to put something like this together. I am persistent, but you have to be as determined as I was with this collection to get it where it is now. I know what the value of these cards are, but really that doesn’t matter much to me. I wanted them all and I am not stopping at 500 because I know there are more out there.

“I remember seeing one of the cards I needed on eBay once and as I was about to bid on it I saw the description which read something like, ‘These are drying up fast! There is a crazy collector in the states that has 300+ of them, get them before they are gone!’ Well I won that auction and messaged the guy afterwards saying, ‘Payments sent, can’t wait to get the card, Sincerely, THE CRAZY COLLECTOR FROM THE STATES.’

“There have been some funny rumors out there about my collection like I have my walls papered with these cards or the floor tiled with them. My favorite is that I have to sleep on my couch because my room is full of Marvin Williams cards. Hopefully this dispels some of those rumors, check out this picture of all of them. They all fit in one three-row box with some room to spare.” 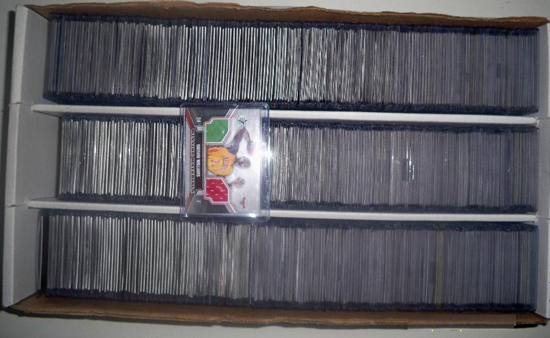 Proof that good things do come in a small package.

Congratulations Adam, you have really proven yourself to be THE Marvin Williams Super Collector! Help Adam continue his quest to get all the SPx Winning Materials cards out there by going through your older UD NBA cards. Did you find any Marvin Williams cards? If so, contact Adam at adamandjennie8195@hotmail.com.


Awesome job, Adam! I will let you know if I find any!


I’m always amazed every time I see the photo with all 500 of them. Adam is an all around great guy who is just as generous as the collectors that he talks about here. I myself couldn’t even tell you how many times Adam has hooked me up with cards for my collections or helped me to acquire them. He’s truly one of the good guys in the hobby.

Nice work on featuring him UD.