I Got Lucky at the National

Every few years my wife and I try to shake things up, and this year we did so by moving from Salt Lake City to Washington, D.C. Talk about change. But I was excited that pretty much my first week out there I would get the chance to see some old friends from Upper Deck. I’ve had a lot of luck with Upper Deck over the years. You see I won their Presidential Predictors contest two years ago and got the chance to throw out the first pitch at a Padres game. The next day I was able to tour the UD facility. It was awesome! I made friends with so many people at UD, I became a contributor to their Blog as well. And as luck would have it, I found out they would be in the neighborhood for the National Sports Collectors Convention the same week I moved in, so I just had to drop by.

I imagine heaven being a lot like a sports memorabilia convention. When I arrived at the show in Baltimore last week I met up with Chris Carlin, UD’s sports marketing & social media manager, and he walked me back to the company’s booth. The show was massive so we had time to talk as we made our way to the booth glancing at tables along the way. As far as I was concerned there were gold bricks lying everywhere. Autographed memorabilia, cards, paintings, cards, bats, cards, balls and more cards. You get the picture, I really love cards. I asked Chris how one could be sure they were getting an authentic autograph item even if they bought it here. He reminded me that even though it looked good you still had to do some research to make sure you were actually receiving something authentic. I guess that’s one of the good things about Upper Deck Authenticated, they witness every signature, but they were not around when Babe Ruth was signing so you’ve got to do your homework before making a big purchase, especially at a show.

Although the Upper Deck booth was not the biggest at the show, its presentation was perfect. There were two tall, well-lit glass displays with a myriad of UD product showcased. To me the most impressive was the complete set of Entomology cards from the 2009 Goodwin Champions set and also the Michael Jordan Curve display which included a piece of the United Center floor autographed by His Airness. Other items on display were an autographed Tiger Woods framed photograph and a card with actual cable from the Golden Gate Bridge. We also got a preview of the upcoming 2010 Sweet Spot Football and 2009-10 NHL The Cup cards which are coming out soon. 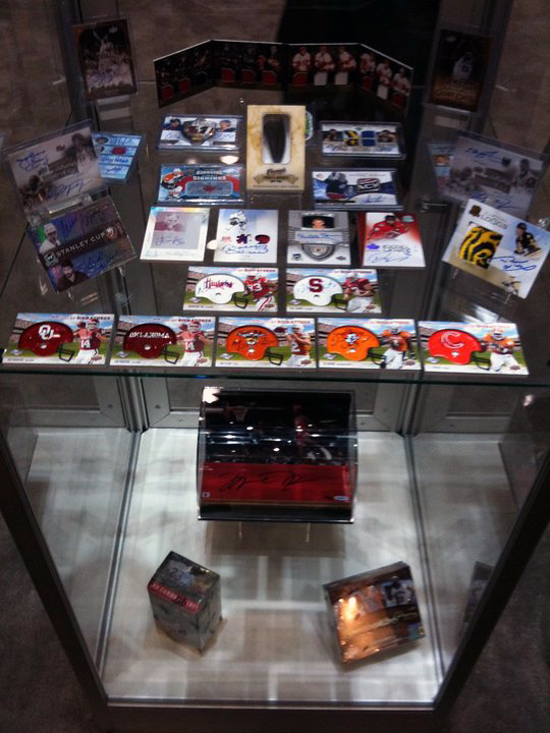 After being introduced to everyone in the booth I got to meet some of Upper Deck’s Diamond Club members who were trading cards and opening high-end products at the booth. They are just a great group of extremely passionate collectors who show their loyalty by collecting LOTS of Upper Deck product. In return for their loyalty, Upper Deck puts together a variety of events for them throughout the year to make sure they know they are appreciated. The Saturday morning I was in attendance UD had an informal meet-and-greet set up with Packers Hall-of-Fame quarterback Bart Starr. How cool is that? I was lucky enough to be in the right place at the right time as Chris asked me to join them for the event. 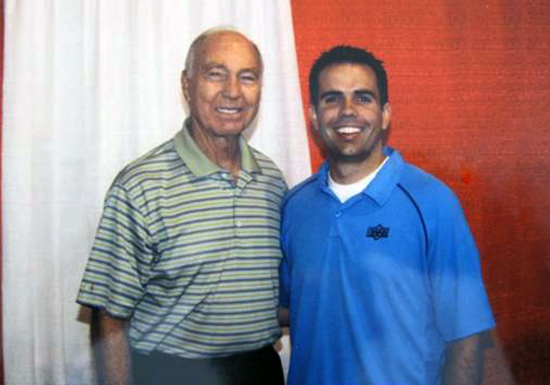 Since there are so many cards out there it is easy to have a huge collection without a lot of value. As a collector myself, I want to really focus on players I think will have some future value and for the time being I have narrowed my focus to 2005-06 NBA rookie cards of Deron Williams and Chris Paul. Not only do I think their rookie cards will continue to escalate in value, they are also two of my favorite players to watch. I found a booth that actually had some product from that year in stock at a reasonable price. I purchased a pack of 2005-06 NBA SP Signature Edition and picked the tin with Larry Bird on it. Tucked in between two common cards I found myself holding a Deron Williams Rookie INKorporated Autograph card numbered to 50. I couldn’t believe my luck and even some of the Diamond Club members were impressed. What a great find! 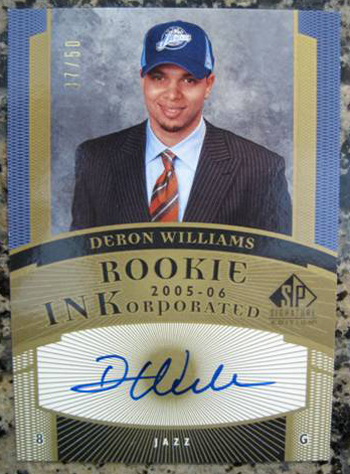 There was a long line of collectors wrapping around the hall to the Upper Deck booth for the wrapper redemption program they were hosting at noon each day. Upper Deck created a special series of cards specifically for the National Sports Collectors Convention and the only way to get them was by opening packs of current Upper Deck product in front of one of the UD team representatives. Each day there were different packs, and by coming back every day you could collect the entire set. Randomly inserted were autograph cards of LeBron James, Michael Jordan, Gordie Howe and more. I saw one kid get a LeBron James and Michael Jordan card out of two different packs. Apparently I’m not the only one who has luck with Upper Deck products. 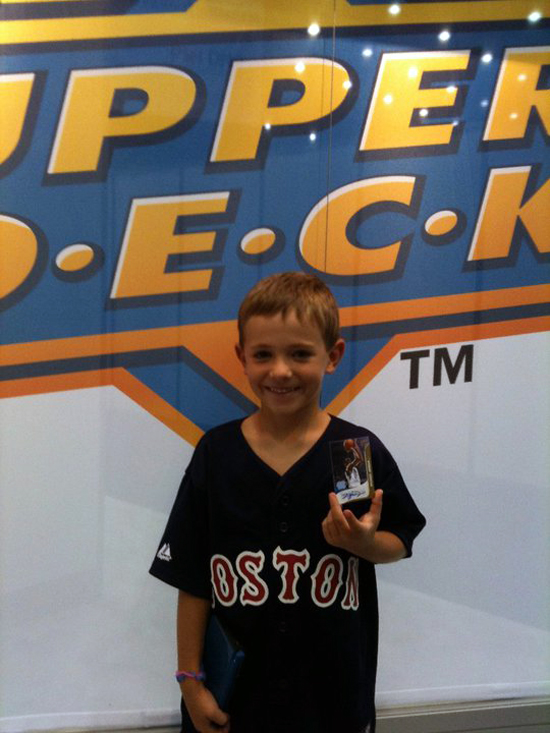 Chris let me help a bit by passing out tickets for a raffle Upper Deck was holding that afternoon. Another huge gathering of sports fans converged on the Upper Deck booth for the raffle where UD was giving away a Mitchell & Ness jersey, 1-of-1 printing plate cards, a Zach Parise signed puck and a Peyton Manning signed Tennessee Volunteers mini helmet. Those who didn’t win received some Upper Deck sling packs as a consolation prize, which was nice to see so not many people walked away empty-handed. 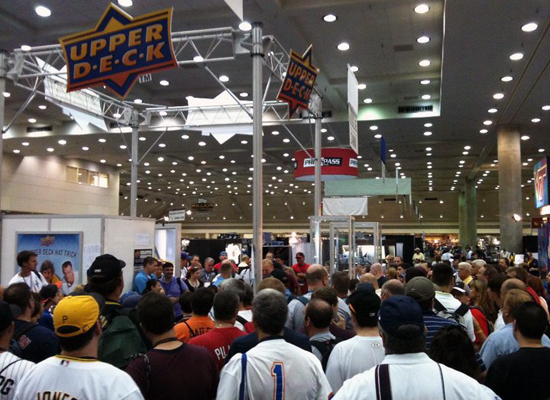 I continued to visit with collectors throughout the afternoon at the UD booth and there was a common theme I heard over and over again. I heard them talk about how they love the quality of Upper Deck’s products. They shared how they miss Upper Deck making NBA products in particular. They liked how UD was there to help and had staff on hand to help them with any issues. But more than anything, the sentiment collectors shared about Upper Deck was that they really cared. This wasn’t news to me as I have been lucky enough to experience that all first hand on several other occasions.

At the end of the day I walked the show a little more and picked up some more unopened product just hoping I could make it home before I started opening the packs. It was a lot of fun to get to spend so much time with the Upper Deck team and their rabid collectors. I’m excited to see the products they have in store for collectors like me and I’m already making plans to attend the show next year in Chicago. To top off an already great day I found five bucks while I was walking to my car. What can I say, when it comes to Upper Deck, I’m just lucky.