This past Saturday, July 31, was a special day in Upper Deck’s history. It also marked a significant day for yours truly. You see, Upper Deck Authenticated (UDA) had secured an autograph-signing session with company spokesman LeBron James during his King’s Academy Basketball Camp, which was being held at nearby Rimac Arena on the campus of UC San Diego. The meaningful part for me was the fact that I got to interview LeBron, face-to-face, on camera. I was pumped. 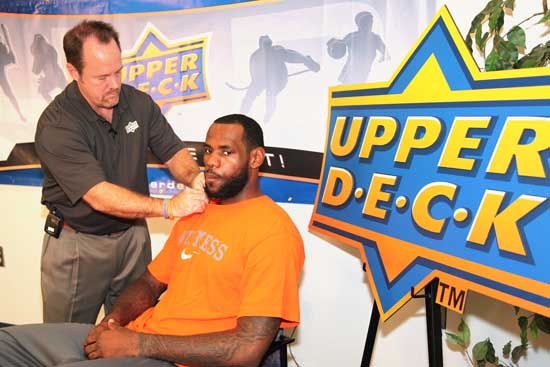 THANKS FOR SITTING: Properly miking up King James was my first assignment of the day, after hanging the Upper Deck signage, that is.

As we’ve done exclusively since 2003, our mission was to nail down authentic, eye-witnessed signatures from “The King” for fast-approaching UDA product launches. But what made this particular meeting historic was the fact that it was LBJ’s first official “Miami Heat” signing for the company. He would autograph Heat-emblazoned basketballs and multiple photos showing him sporting his new No. 6 uniform. 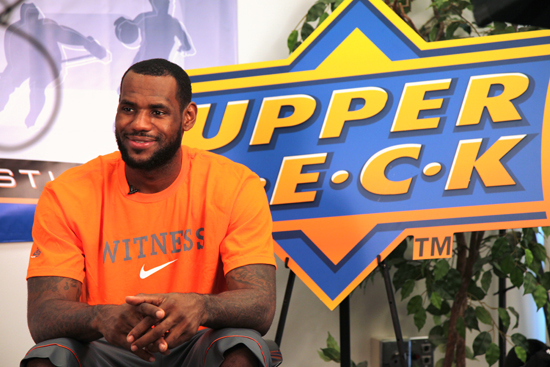 STRANGEST SURFACE? LeBron chuckled when I asked him what's the strangest surface he's ever been asked to sign. "Body parts," he said. "Many body parts."

The signing went smoothly; the products he autographed should be available to purchase on the UD Online store toward the tail end of next week. But the exciting part of the equation for me came right at the start, when I was able to ask LeBron several questions about his new team; new jersey number; whether or not he likes signing for the fans; and even a question or two about his personal collection. He was cooperative, informative and even shared a few sound bites that none of us had heard before. For instance, did you know his most prized autograph is a signed TIME magazine cover by the reigning Commander-in-Chief, Barack Obama? And exactly how many fans out there already knew that LBJ is a lefty when he signs his autograph? 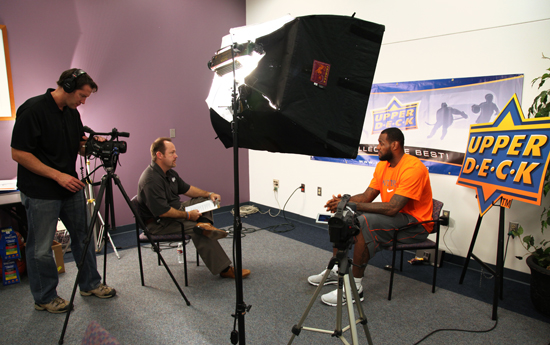 EN FUEGO: According to LeBron, his plan is to turn the Miami Heat into perennial contenders every year. "It will mark a new beginning for me," he said.

I asked him what he’d like to say to his new fans in Miami; the most unusual surface he’s ever been asked to sign; and would he continue his pregame talcum powder routine beside the scorer’s table each night.

The process of landing the LeBron Q & A was relatively easy, thanks to the orchestration efforts of Upper Deck’s Athlete Relations team. Landing a capable videographer for the Saturday afternoon shoot was not hard either; I only had to mention that LeBron James would be on the other side of the lens. Since making his well-documented “Decision” back on July 8 regarding his departure from Cleveland and impending arrival in South Beach, LeBron has endured his fair share of criticism, especially from the hometown crowd. A native of Akron, Ohio, and  former three-time Ohio State Basketball Player of the Year while attending St. Vincent-St. Mary High School, he understood the backlash that would occur once he made his announcement. In seven exciting seasons with the Cleveland Cavaliers, LeBron averaged 27.8 points per game and led the Cavs to the NBA Finals for the first time ever in 2007. 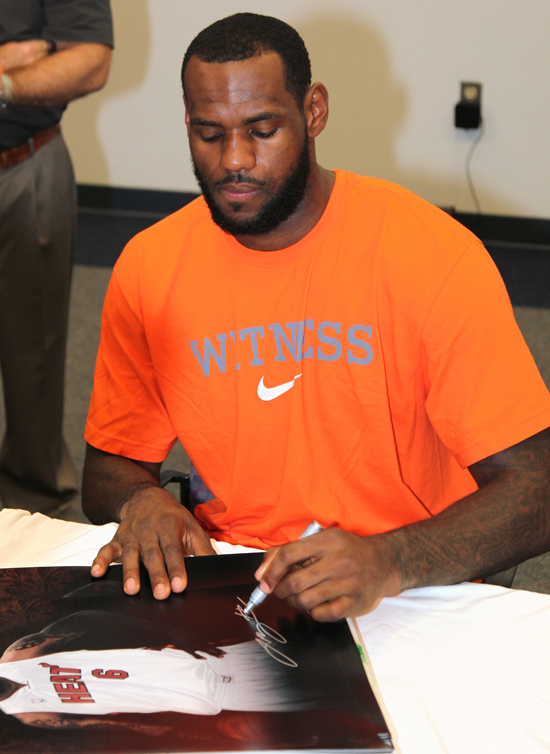 But this day, three weeks after his announcement, he was more eager to discuss his newfound plans about winning a championship in Miami alongside the likes of perennial All-Stars Dwyane Wade and Chris Bosh.

‘It’s gonna be exciting,” he said. “It will mark a new beginning for me. Most of all, it’s gonna be fun.”

As will the unveiling of his new uniform number for memorabilia collectors. A longtime admirer of Hall-of-Famer Julius Erving, who sported the same number during his days with the Philadelphia 76ers, LeBron mentioned that the number brings with it some good Mojo as well. It’s the number he wore during the 2008 Beijing Summer Olympic Games when Team USA brought home the gold medal, its first since 2000. LeBron scored 14 points, pulled down six rebounds and added three assists in “The Redeem Team’s” 118-107, gold-medal-winning game against Spain. 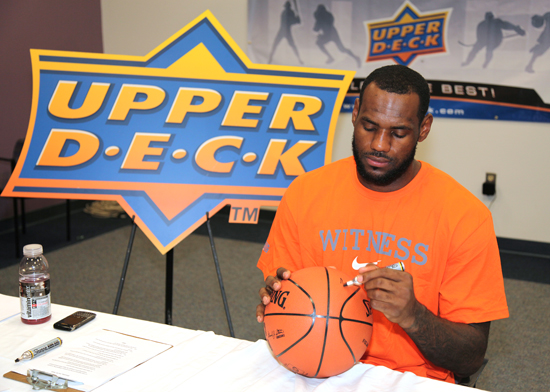 SLOW AND STEADY: LeBron autographed several Spalding basketballs during the UDA signing, which will be available next week at Upper Deck's online store.

LeBron doesn’t turn 26 until December 30. He’s a 6’ 8” basketball phenom who’s about to embark on a whirlwind tour with more on-court talent surrounding him than he ever had in Cleveland. With apologies to an aging Shaquille O’Neal, that’s simply the way it is. The world is LeBron’s oyster; the NBA title remains his elusive pearl.

As for his responses to some of those other questions I posed? I guess you’ll just have to wait for the video to see how those came out.


Man UDA continues to show they are the best… Can’t wait to see those HEAT products hit the market!