How Many Injuries Can the Red Sox Suffer?

I’m a big baseball fan; have been for 40-plus years. And even though I grew up on Long Island, I was brainwashed early by my Boston-bred father to cheer for the Red Sox. It was the ‘70’s and with guys like Carl Yastrzemski, Carlton Fisk, Fred Lynn, Jim Rice and Luis Tiant in the lineup, it seemed like a pretty good thing. Besides, I hated listening to the completely biased remarks and commentary being spewed about by NY Yankee announcers Phil Rizzuto, Frank Messer and Bill White on WPIX  (Channel 11).

Well, for the next 30 years, I endured like the rest of New England, watching the Red Sox come oh-so-close to winning it all, only to lose in very dramatic fashion via multiple scenarios: Game 7, 1975 World Series; 1978 one-game playoff against the Evil Empire; Game 6, 1986 World Series; and, of course, Game 7, 2003 American League Championship Series, when fly-by-night Yankee third baseman Aaron Boone took Tim Wakefield yard in the bottom of the 11th inning.

But lo and behold, all became right with the world in October of 2004 when the Red Sox not only came back from a three-games-to-none deficit to beat the dreaded Yankees in the ALCS, but also swept the Cardinals in the World Series. Since St. Louis had beaten the Sox (in seven games, naturally) in the ‘67 Fall Classic, it was like exorcising two demons in two weeks off New Englanders’ backs. It marked Beantown’s first WS ring in 86 years and a lot of elderly folks in the northeast were saying they could go to their graves now because they had seen the Red Sox reverse the curse of the Bambino, Babe Ruth. Boston’s subsequent title in 2007 was a true gift, something nobody except for Boston GM Theo Epstein expected to see again in this lifetime. But because it was the Red Sox, a team so often associated with heartbreak in years past, everyone embraced their second title inside of four years. 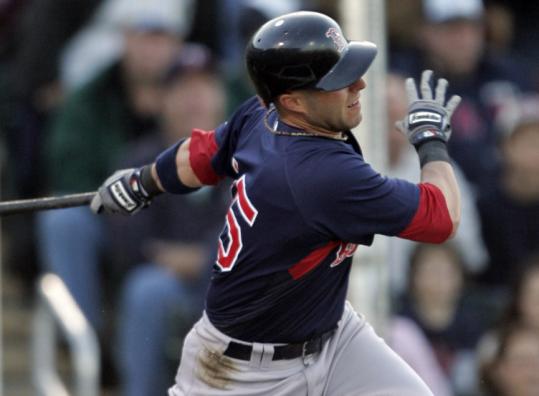 Come back, Pedroia: I can't wait for my favorite second baseman to come back swinging.

But this year, the Boston batsmen – despite dropping like flies due to a rash of injuries – are hanging in there, trailing their arch-nemesis by seven games in the AL East standings as of today. I still get the MLB Extra Innings package, which allows me to watch my beloved Sox night after night and listen to their funny (and, dare I say, objective) commentators Jerry Remy and Don Orsillo. Even my wife likes listening to these two chowder heads because they really seem to have a good time chatting it up in the broadcast booth. But lately, the walking wounded wearing red socks haven’t been able to win too many series. And now I’m starting to wonder if some higher force is trying to cripple my favorite team. I mean, first it was Josh Beckett (back) and Jacoby Ellsbury (broken ribs) going down in April. Then June came along and snatched Clay Buchholz (pulled hammy), Dustin Pedroia (broken foot), and Victor Martinez (broken thumb) in less than 48 hours! July wasn’t exactly kind either as Adrian Beltre (hammy), Jeremy Hermida (ribs) and Mike Lowell (hip) all took turns on the DL.

The Yankees, incredibly, have been blessed with great health nearly the entire season; save for Andy Pettitte’s pulled groin a couple of nights ago. But despite the number bodies falling by the wayside, Sox manager Terry Francona has been able to keep his team in every game and battling to the last out. At times it’s been tough to watch my prized baseball team take the field with nobodies like Darnell McDonald, Eric Patterson, Bill Hall and Dusty Brown in the starting lineup, but I must admit, they’ve been holding their own. And the Sox latest breakthrough star, Daniel Nava, seems to have actually attracted a legion of fans over in left field.

The Red Sox start a four-game series with Seattle tonight, so let’s see if something magical can take place at Safeco Field. On paper, Boston should win tonight. Right-hander John Lackey (9-5) squares off against the M’s Ryan-Rowland-Smith (1-9). After dropping back-to-back series against the Rays and the lowly A’s, the Fenway Faithful need something good to happen to their team. The rest of the 2010 MLB season starts in about two hours. Let’s roll.


I agree with Rich, I would rather see them healthy though to watch NY and the Sox go at it head to head