All Smiles at the Staples Center

While hockey’s annual amateur draft is all business for the NHL suits tasked with filling out their organizational depth charts, the fun of the experience is best reflected in two groups of people: the young men who have come to (hopefully) see their lifelong dreams fulfilled, and the fans who make the pilgrimage to witness the big moment for the next generation of hockey’s stars. 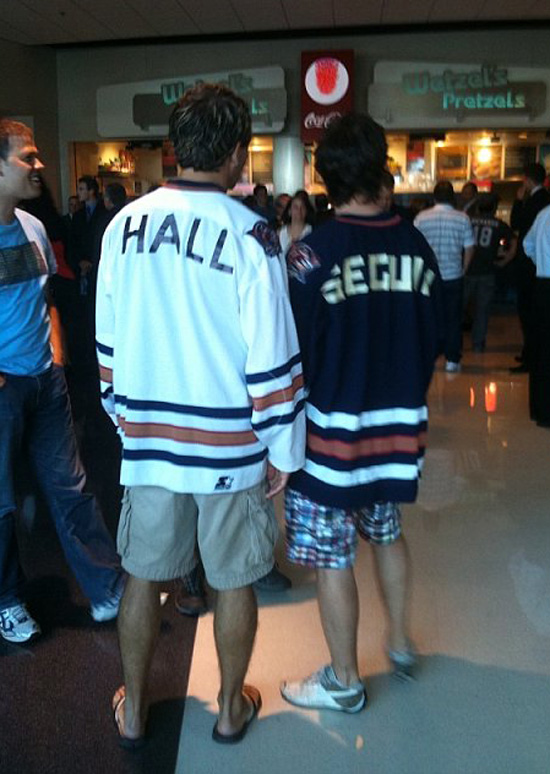 Who's being drafted first? Edmonton Oilers fans clash over their top overall pick.

It’s a safe bet that Taylor Hall and Tyler Seguin have bright futures ahead of them very shortly, as do many of the other first-round picks, but there will also be several less heralded players from later rounds who will emerge from the margins to establish themselves as solid NHL players. That’s why many youngsters taken even in the sixth and seventh rounds were in attendance Saturday to put on a jersey, shake some hands, have their pictures taken and meet with the media. It happens every year, and that is why from Hall at No. 1 to Zach Trotman at the 210th (and last) pick, the draft every year is all about what might be. 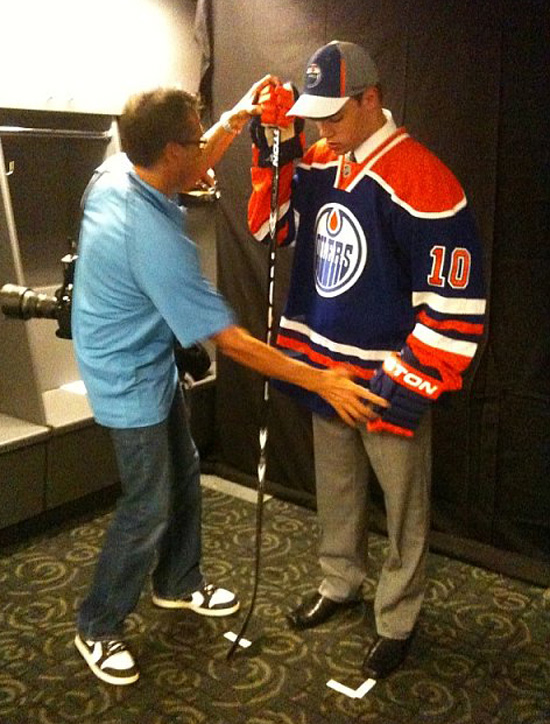 Step up to the the tape. No. 1 overall pick Taylor Hall gets ready for his Upper Deck close-up.

It’s the same reason why scores of Edmonton Oilers fans made the trip to Los Angeles this past weekend to witness the first NHL Draft ever held on the West Coast of the United States — to see their team select what they hope will be the franchise’s next superstar.

I spent plenty of time on the weekend at Upper Deck’s booth on the Staples Center concourse, handling wrapper redemptions that the company was doing exclusively for this event and schmoozing with fellow hockey fans and card vendors. And I also spent a lot of time behind the scenes helping Upper Deck photographers as they took pictures of the recent draftees.

The redemption booth was busiest on Friday during the first round, then again when Kings captain Dustin Brown stopped by to sign autographs on Saturday. While the majority of folks who turned out all weekend were Kings fans from the area, there were plenty of people who came from more far-flung locales. One such group had come all the way from Cole Harbour, Nova Scotia (Sidney Crosby’s hometown) — a “billet” family who had made the 3,600-mile trip to support the young man who’d lived with them for the last several years, and in the process become part of the family, on his big day. Steve, the billet father of young Mathieu Corbeil-Theriault, who was taken with the 102nd pick by Columbus, wore a wide grin as he described the experience of the trip as akin to being “a kid in a candy store.” 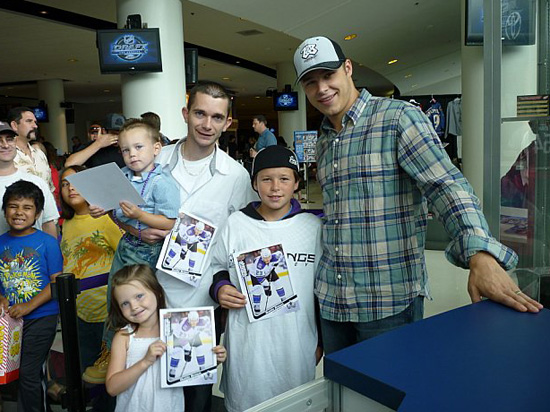 And that was a scene repeated over and over again. Working down at our photo station, a co-worker pointed out how cool it was that every kid walking through the door sporting a new NHL jersey was doing so only moments after their dream of a lifetime had been realized. Because some of these kids will go on to be stars, many will make a lot of money playing a game they love, and still some will never play a shift in the NHL. But one day they will all be able to tell their grand-kids they were an NHL draft pick once upon a time.


Wow, wish I could’ve been there! I like Dustin Brown alot now, that was really nice of him to sign autos there.