Every four years the eyes of the world are turned to one single event. It’s an event where countries bring together their best men to battle for the title of champions of the world. For one month all countries are on a level playing field where economy, population, size and type of government don’t matter. Each country is given the same chance to win. This year the United States Men’s National Soccer Team will field their best 11 men ever, led by a fearless captain in Landon Donovan. This is the year of the World Cup. 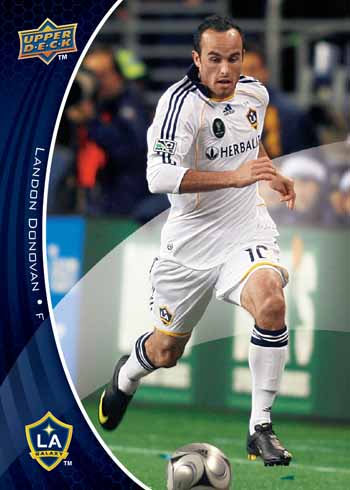 The success of United States soccer is due in large part to the emergence of Major League Soccer and its preparation of young talent to grow within the league. MLS has done such a good job that a number of players such as Jozy Altidore and Clint Dempsey have been picked up by some of the best clubs in the world. On the other hand huge international names are finding stiff competition here that did not exist 10 years ago. David Beckham is by far the most popular of international players to test their talents on U.S. soil, but many have followed and more come each year. Soccer is on the rise, and as the world watches this June there will be the largest number of MLS players participating since the inception of the league.

With this year having so much meaning for soccer players, teams and fans it is no surprise that Upper Deck has once again produced an elite product to commemorate what soccer in America has accomplished. Today, May 18, the 2010 Upper Deck MLS set hits store shelves and each pack will have something valuable to offer. Along with the 200-card base set, there are a number of amazing pulls to be found. Here are some of the set’s highlights. 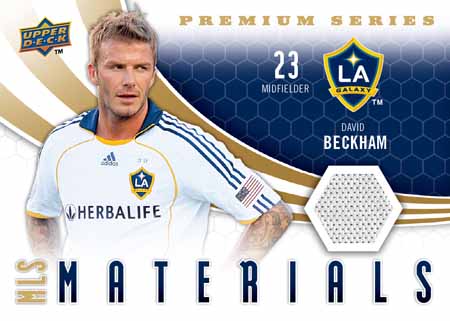 First and foremost, Upper Deck has refined its already elite card making process and has made the surface of their cards more Sharpie-friendly. Even with all the patch, autograph or jersey cards included, this is by far the best part about the product. Unlike other professional athletes, soccer stars are much more approachable and almost always willing to sign autographs. The big stars like Beckham understand the importance of a good fan and will take a moment to say hello. Essentially you could have a complete autographed set. It’s just up to you to attend the games. It’s a challenge worth undertaking.

As mentioned before, Landon Donovan will be leading the charge for the U.S. and you can be sure to find not only his patch and jersey cards, but also his autograph. If that isn’t enough there are also “MLS Teammates Dual Materials” insert cards numbered to 65 that include Beckham and Donovan side by side. There are even “MLS National Pride Triple Materials,” “MLS Superstars Quad Materials” and “MLS Materials Premium Series” with, of course, Donovan, Beckham, Pablo Mastroeni, Kasey Keller and Juan Pablo Angel to name a few. This set is packed with a ridiculous amount of amazing cards. 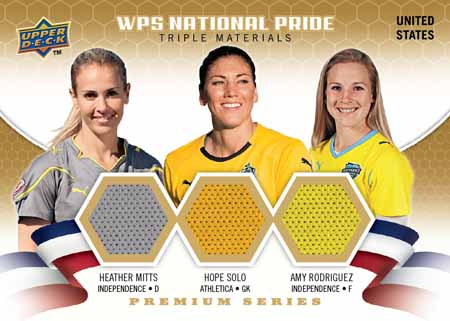 Many of you may or may not know about Women’s Professional Soccer (WPS), which started just a year ago in the United States. It wouldn’t be fair to overlook standouts like Heather Mitts or Hope Solo for all of their accomplishments as female athletes representing their country on the world stage. They now play professionally on their home turf, and Upper Deck is making sure they are getting noticed with patch cards, quad materials cards and a lot more. If you haven’t seen these ladies play, you are missing out.

Too many times soccer is not given the credit it deserves in our country which is unfortunate because many of these players are more recognized throughout the world than guys like Kobe Bryant or Peyton Manning. To call yourself a true collector you need to add some Upper Deck Soccer to your collection. These aren’t just players that couldn’t hack it in a ‘real’ American sport. These are true athletes whose stories will become legendary tales told to future generations. There is real value in any Upper Deck product, but high value comes with collecting icons. Don’t miss it. You will find yourself watching the World Cup with a lot more interest, cheering for the United States and cherishing your Landon Donovan autograph.