This past weekend, a hard-working crew of gridiron fans/employees from Upper Deck attended the 2010 NFL Players Rookie Premiere Photo Shoot in Los Angeles. The actual photo shoot portion of the weekend’s festivities took place on Saturday, May 22, at the L.A. Memorial Coliseum. A total of 35 sought-after college draft picks were on hand to participate, including No. 1 overall selection Sam Bradford of Oklahoma as well as other prized quarterbacks like Tim Tebow (Florida), Jimmy Clausen (Notre Dame) and Colt McCoy (Texas). The Upper Deck crew had four items on its agenda for each of the rookies: 1.) Get your photo taken sporting your college team’s jersey; 2.) Sign hundreds of insert cards and sticker labels for upcoming CLC (Collegiate Licensing Company) football products from Upper Deck; 3.) Answer pointed questions on video about your college careers as well as the future plans of UD Spokesman LeBron James; and 4.) Give us your best rendition of your beloved Alma maters’ fight song! The Upper Deck crew is ready to take on the college draft picks.

The picture-taking portion went off without incident, as did the autograph-signing station where the top-notch players signed more than 17,000 autographs inside of four hours! Believe it or not, close to 11,000 hard-signed Sweet Spot autographed cards were inked. That’s a lot of cards to carry home, folks! But the most entertaining part of Saturday’s agenda was, without a doubt, the “College Football Fight Song” contest where more than 30 of the players gave it the old college try. Some of the players knew their respective fight songs by heart, while others scratched their heads and asked us to sing a few bars to get them going. Truth be told, both players from USC (wide receiver Damian Williams and running back Joe McKnight) nailed it right out of the gate on their first tries. Taylor Price (Ohio) and Rolando McClain (Alabama) needed a little help with cheat sheets, while QBs McCoy, Clausen and Tebow belted their songs out with gusto, each showing plenty of school spirit. The Citadel’s Andre Roberts, a wide receiver, chose not to sing at all, but instead busted out his best dance moves for the video crew to record, while fellow wideout Dexter McCluster (Ole Miss) sang, grooved and added some interesting arm maneuvers (as well as original lyrics) to his rendition for the Rebels faithful. And one player, Nebraska’s 300-pound defensive tackle Ndamukong Suh of Nebraska simply said: “Don’t ask me to sing.” So we didn’t! 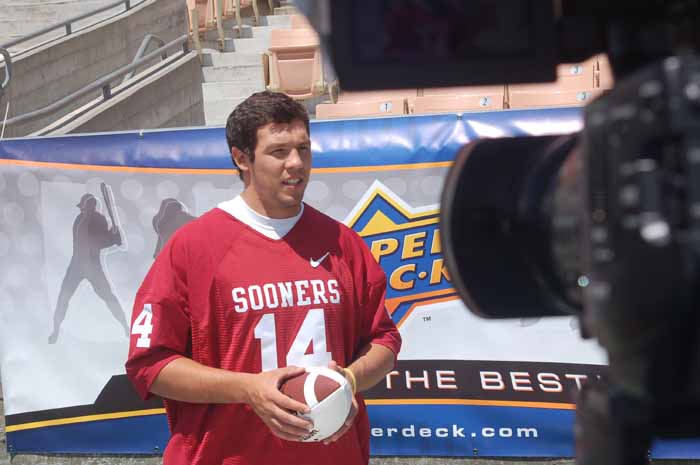 Keep your eyes peeled for a special “College Fight Song” viral video that yours truly is putting together to commemorate the draft picks and their best vocal efforts that will be debuting on YouTube and Upper Deck’s Diamond Vision site shortly. The overall winner will be announced just as soon as the video hits! 2007 Heisman Trophy winner Tim Tebow out of Florida had his Gator Fight Song down pat.