Beantown Fans: Not All Gravy

Last Friday night was a big night surrounding Boston sports. The Bruins were trying to lock down their first visit to the NHL’s Eastern Conference Finals since 1992 with a victory over the Flyers, while the Celtics were hoping to go up two games to one in their best-of-seven semifinal against the top-seeded Cleveland Cavaliers and reigning NBA MVP LeBron James. But the matchup that had me the most excited was the base-brawl game on tap that evening between the Red Sox and Yankees at Fenway Park. And do you know what happened on this would-be glorious night? Not a single victory for Beantown, that’s what. It was the worst kind of trifecta. I guess you could even call it the evil twin of all hat tricks.

Granted, I’m a Boston fan from way back and nobody on the planet admires the outstanding play of the teams that battle out of Kenmore Square and TD Garden more than me. With the Red Sox and Yankees, it’s the hotly contested play that always seems to surface every time these two bitter rivals square off that keeps guys like me coming back for more. It’s a prize fight every time out and I love it. I can still see Carlton Fisk and Lou Piniella getting into a nice scrap in 1976 at Yankee Stadium or Jason Varitek standing up to Alex Rodriguez in that pivotal July ’04 game at Fenway. If you recall, that particular game turned the Red Sox season around and sent Francona and company to Boston’s first World Series title in 86 years. Down 9-4, they rallied back following the grappling match between ‘Tek and Arod to take an 11-10 decision. And the rest, as they say, is history.

The Celtics are just fun to watch. Sometimes they can be downright frustrating, as was the case on Friday night when they posted the franchise’s worst playoff loss ever. But for the most part, they are entertaining and competitive. Doc Rivers has a well-oiled (albeit aging) group of players that knows what it takes to win. They won it all in 2008 and have almost the same team playing nowadays. But they can get tired at times and Friday night’s debacle was a classic example. But then yesterday’s rousing victory over the Cavs behind Rajon Rondo’s incredible triple-double put everything back in its proper place.

Every sport has its loyal fan base and every rivalry has its memories. The Bruins are no exception. Whether it’s the Canadiens, Rangers or Flyers, the Bruins and their faithful fans hate those guys and would like to see nothing more than Boston hoisting its sixth Stanley Cup next month. While they dropped a 5-4 OT thriller on Friday, chances are they’ll finish off the Flyers tonight and move on. Great MoJo behind former B’s like Bobby Orr, Phil Esposito and Derek Sanderson will carry over to Chara, Rask and company this evening to make this dream a reality, just you wait and see. 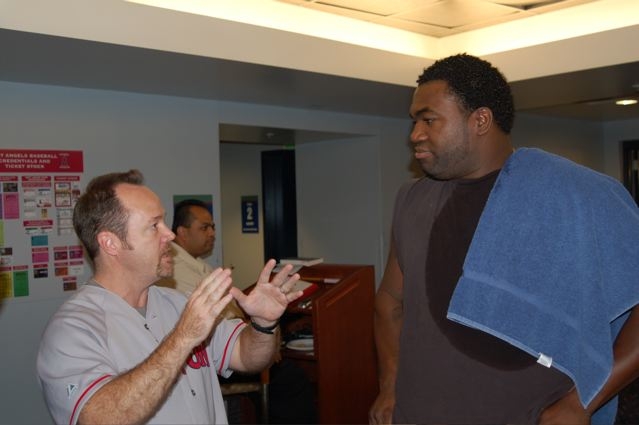 Getting back to my beloved Bosox, Friday night was embarrassing. With Josh Beckett on the hill, I expected fireworks, just not M-80s being lit by the Yankees. A 10-3 beat down, followed by a 14-3 drubbing on Saturday pretty much took the wind out of my sails. But lo and behold, Sunday night spelled success for the Red Sox with Jon Lester on the mound and Big Papi, David Ortiz, actually finding his swing…well, sort of. His run-scoring, ground-rule double to right used to be a three-run jack just a few short seasons ago, but I’ll take whatever gas he has left in the tank at this point. You see, Ortiz and I have met one another (see photo above) and I’ve been trying to tell him just to stay calm and make contact. But like all projects, it’s a work in progress. The good news is that he’s showing signs of life and that could spell bad news for the Yankees next time around. Well, we can only hope.