And Then There Were Four: NHL Conference Finals

Montreal, Philadelphia, San Jose and Chicago. These are your final four teams competing for the Stanley Cup. Raise your hands if you had these four in your bracket when you filled it out at the start of the playoffs…now put your hand down you liar, no one saw this coming.  No one.

Taking a quick look back at the first round in the Western Conference saw next to no surprises in terms of higher seeds advancing. Only the Detroit Red Wings were able to upset the Phoenix Coyotes in the first round, and safe to say that didn’t surprise many.  Full marks to a Phoenix team for filling their barn each game and getting that young team experience to build upon for the upcoming years. That team appears to be in good hands. 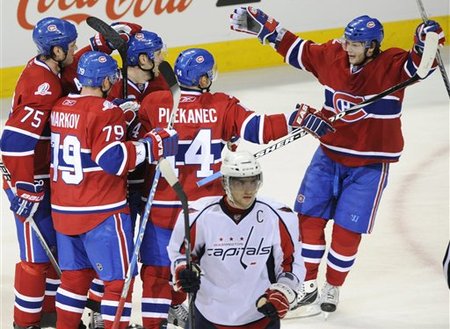 The Playoffs spelled another bitter end for Alexander Ovechkin and company.

The first round saw the three division leaders’ advance along with the Red Wings to the conference semi-finals where Chicago was able to bounce the Vancouver Canucks from the playoffs for the second straight year. They were able to rough up an inconsistent gold-medal-winning Roberto Luongo on a fairly regular basis. Luongo seems to have problems dealing with what the Black Hawks bring in their game. Very disappointing end to the season for the Canucks as they had aspirations of the Stanley Cup, and this appeared to be their year to make a push for it. This playoff season appears to be the coming out party for Dustin “Buff Daddy” Byfuglien. The 6’ 3” nearly 250-pounder was a point a game man for the Hawks against the Canucks, and able to both fill the net as well as play the back end where needed.

In the other conference semi-final, San Jose helped to erase some recent playoff failures by ousting the Red Wings rather quickly. They were able to take advantage of the Red Wings fantastic rookie goaltender Jimmy Howard and get to him and seemingly get into his head and provide doubt in his game. Detroit has played so many hockey games over the past few seasons, it appeared as though they simply ran out of gas. Going to the finals two years running, as well as having as many players go to the Olympics as they did, it is no wonder. Johan Franzen put together a game for the playoff ages in Game 4, putting up four goals and adding a couple of assists as well, to account for the bright spot for the Wings in the second round. Just coming off of a major injury, he should be able to get a good off-season in and come back as the “Mule” again for the 2010-11 season.  Joe Thornton, long been dubbed a playoff wilting rose, was able to rise up and be the big-time player in the playoffs that people have been calling for years to appear. Jumbo Joe put up eight points including three goals over the fiv- game series to help quiet some critics.

The top two seeds going at it. Both play very strong team games and have been getting the necessary components to win games. Undrafted rookie goalie Antti Niemi has been good, giving up under two-and-a-half goals a game, captain Jonathan Toews has had some brilliant games, and is one of the playoff’s leading scorers. Chicago is also getting solid play out of former first overall pick Patrick Kane as well as Patrick Sharp. On the back end, Duncan Keith is playing over 27 minutes a game and Brent Seabrook is hitting anything that comes near him. This young team seems to have learned lessons well from last year and is poised to make a run for their first Stanley Cup appearance since 1992 and their first Stanley Cup since 1961. 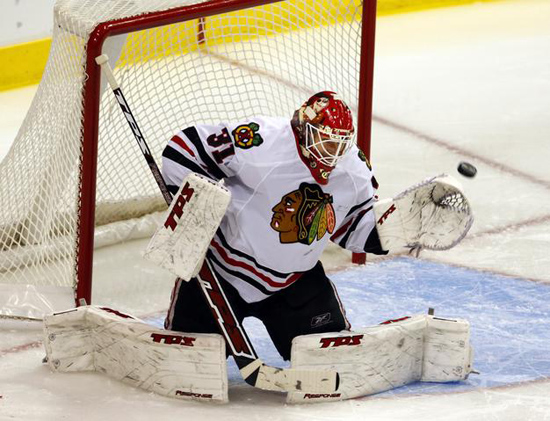 San Jose is looking for their first appearance in the Stanley Cup playoffs, and after their recent past of seemingly choking in the playoffs, most didn’t expect them to get to this point. If the likes of Thornton, Dany Heatley, and Patrick Marleau can jump to the forefront, coupled with this year’s playoff performer Joe Pavelski who has nine goals so far, and led by back-end talent Dan Boyle and playoff veteran Rob Blake, things look good.

Over in the Eastern Conference, it has been mayhem since the get go. All three division leaders were upset in the first round with only No. 4-seeded Pittsburgh (defending champs) making it through as a top seed. The Cinderella Smurfs….oops, I mean Montreal Canadiens, were able to knock off the President’s Trophy winning Washington Capitals after being down three games to one, and cause league superstar Alexander Ovechkin another year of playoff humiliation. The Boston Bruins dispatched Ryan Miller and the division-winning Buffalo Sabres and all-time wins leader Martin Brodeur and his New Jersey Devils were ousted by divisional foes, the Philadelphia Flyers, who have seemingly had their number all year behind backup-goalie-turned-starter Brian Boucher.

The second round, like the first, brought more of the same, with Montreal riding the hot goaltending of Jaroslav Halak. Halak is reminding Canadiens’ fans of past young stars Patrick Roy and Ken Dryden with his ability to steal games. Montreal has had their injury issues on the back end as well, but with that has emerged former second-rounder P.K. Subban. Since being recalled against Washington, he has filled in admirably. He is playing over 20 minutes a night, has been even, and has chipped in four points offensively as well. Off-season pickups Brian Gionta and Mike Cammalleri have been key players on the offensive end. Gionta looks like the future captain, and Cammalleri has shown his mettle.

In what will go down as one of the more memorable series of all time, the Philadelphia Flyers were able to oust the Boston Bruins after being down in the series three games to zero. In the deciding seventh game, with an ironic twist, the Bruins jumped out to an early 3-0 lead, only to squander it and go on to lose the game and the series, 4-3. Simone Gagne returned in Game 4 from a broken foot to score the overtime winner, and set the comeback in motion. After returning, Gagne put up four goals, five points in his four games. Danny Brier has also shown flashes of his offensive game returning to form, netting nine goals so far this postseason. The Flyers will need more of the same to continue their improbable run to the finals. 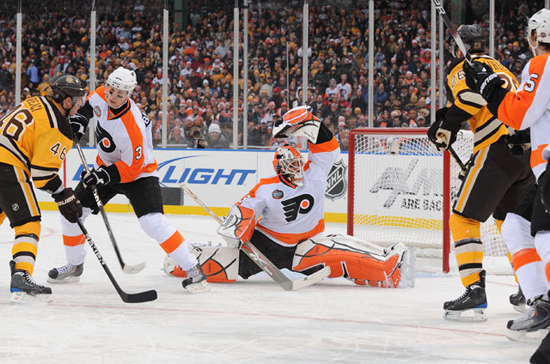 In one conference we have the two top teams battling for a spot in the finals; in the other; we have the two bottom teams, teams that waited until the last possible moment to qualify for the party. At this point, we will start to see the makings of hobby heroes.  Guys like Cammalleri, Subban (when his first licensed cards go live) and Halak in Montreal, Richards, Briere, van Riemsdyk among others in Philadelphia all have the chance to step up and make a difference in their collectability over the next week or so from the Eastern Conference.

Over in the west, expect guys like Thornton, Heatley, Pavelski to look to up their games, and in all likelihood their values on the secondary market from San Jose. Chicago has some hobby heroes in Kane and Toews right now, but a trip to the finals could see another spike in their items. Teams always seem to have the one guy who steps up his game in the playoffs to become a hobby hero, and you will here it here first; Byfuglien in Chicago, Clowe in San Jose, Giroux in Philadelphia and Gionta in Montreal all have the capabilities to put them on the market if they can help their teams to a Stanley Cup Final.

Count me in as a person who hopes we can see an Original Six final. Chicago and Montreal matching up for the Stanley Cup would certainly bring a lot of older fans back into the game and, because of it, they would be watching with their younger family members, telling stories of years gone by and matchups from when they were growing up. With all due respect to San Jose and Philadelphia, the intrigue as well as the simplicity of seeing two of the most iconic jerseys playing in a minimum of four games would most certainly be a treat for us all.

Good luck to all four teams and their fans for making it this far. Let’s keep a close eye on this, the way this year’s playoffs have played out so far, you don’t want to miss what happens next.