The NHL: Not as Easy as it Looks!

Talk about parity. The NHL is one of the most generous sports leagues going, as it always accommodates a total of 16 teams in the playoffs. Just like the NBA, the NHL likes to see just about everybody get a chance to dive into the deep end and fend for themselves. Well, this year’s postseason is shaping up to a be a great representation of not only superb play out on the ice, but equally matched teams that like to stretch games into OT more often than not.

But before I make my predictions for this year’s playoffs, I’d like to share some personal background on why I’m starting to like the NHL more and more. First off, I’m a former collegiate wrestler, so I never really laced ‘em up with guys like Sidney Crosby or Alexander Ovechkin or Zdeno Chara. I liked to tie up with my opponent, shrug him a couple of times and then shoot in for a single-leg takedown. It seemed to work more often than not. I never took shots on goal or body-checked anybody into the boards. I liked to grapple. But having graduated from Oswego State University in New York, I did get to see plenty of good NCAA Division III hockey action during my time at O-State. And now I have newfound respect for all of these guys, from college hockey players to the pros. And it’s all because I took my four-year-old daughter, Dylan, skating over Christmas. It had been years since I put on skates, but I figured I’d at least be able to make some turns and enjoy the overall atmosphere. Boy was I wrong.

Not only did I have trouble just maintaining my balance, but I was pretty much useless in assisting my daughter during her first exposure to a skating rink. Sure I was able to hold her up and help her down the straight-aways, but we routinely crashed into the boards at either end since I seemingly forgot how to stop gracefully, or at least slow down upon arriving at the wall. After about 20 minutes of inflicting this personal punishment, Dylan was soaked and my ankles were screaming. I discovered muscles in my feet that I never knew existed based on the excruciating pain I suddenly felt. I couldn’t wait to put my shoes back on. 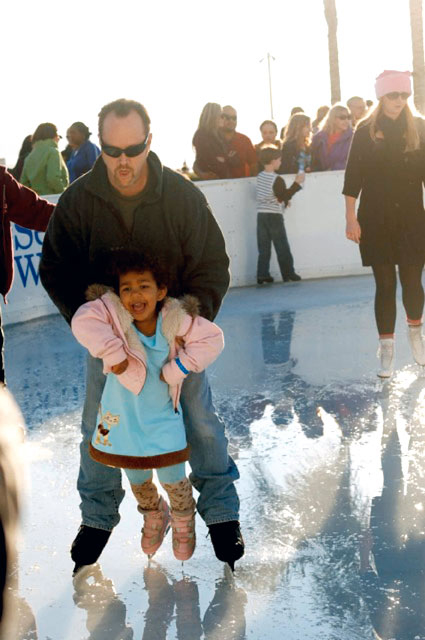 Dilly and Daddy trying not to crash into the boards (again)!

But enough about me, and Dylan. Although, truth be told, she’s a quick study and would have been happy to stay out on the ice for an hour or so. Now it’s time to recap where we are at with the NHL playoffs. In the Eastern Conference, we see the Penguins, Flyers, Bruins and Capitals – surprise, surprise – are all leading their best-of-seven opening round series, 2-1. Likewise, in the Western Conference, the Kings, Avalanche and Coyotes (the Coyotes?) are all one game ahead in their respective series, while the Blackhawks and Predators are playing their rubber match tonight. And even though Chicago finished with three more wins than Nashville during the regular season, I’m predicting an upset by the Predators in this particular opening-round battle. You see, a kid by the name of Colin Wilson is playing for Nashville and he’s somebody I got to meet last August at the NHL Rookie Photo Shoot in Toronto. He was a good kid who seemed destined to do great things in the NHL. And while he’s just getting warmed up (two shots on goal, no scores, through two games), he’ll be a force to be reckoned with in the years to come. His taping ability, however, left something to be desired. Check out this YouTube video Upper Deck produced earlier this season starring none other than Mr. Wilson.

As for my Stanley Cup winner, you ask? That’s easy: the Boston Bruins, of course. It’s been way too long since guys like Bobby Orr, Phil Esposito, Johnny Bucyk and Derek Sanderson hoisted the Cup for Beantown back in 1972. Now it’s time for that monster, Chara, along with the likes of Mark Recchi, Patrice Bergeron and Tuukka Rask to bring Lord Stanley home. Besides, the Pats, Celtics and Red Sox have already won it all this decade!


Hilarious video with wilson and the boys.
Nice picture of the future NHL star, dilly!