I remember watching the NFL championship game at the end of last season, and being less than thrilled that the high powered offense of the Vikings never made it onto the field during overtime. After Favre threw the pick to end regulation, the Saints took the overtime kickoff and marched deep into Vikings territory to kick a field goal and end the game. One of the best offenses in the league didn’t even get a shot to secure themselves a trip to Miami, and a lot of fans were angry. Since the game highlighted a trend in overtime wins for teams that only manage a field goal, the NFL competition committee set out to change the rules for the upcoming year’s playoffs. 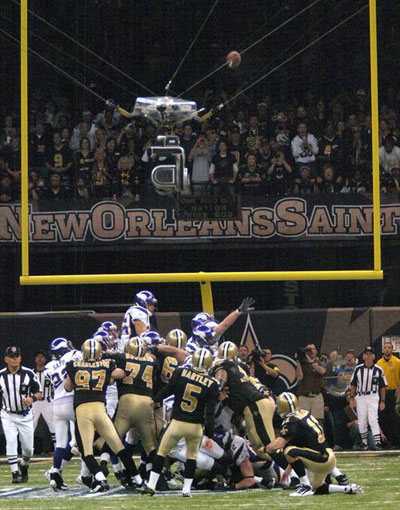 On Tuesday, the NFL announced that the new rules had been adopted, and I took it as a potential game-changer come playoff time. Basically, if a playoff game ends in a tie, the coin toss will happen as usual. If the receiving team scores a touchdown in any way, the game is over – sudden death style. If the receiving team only kicks a field goal, the other team will have a shot to get on the field and score. The rules are only in effect for the playoffs, and regular season games are still subject to similar rules.

Despite the fact that the Vikings could have benefitted from this rule, they were actually one of four teams to vote against the measure. As a reason for voting against the change, the teams cited equality of wins from teams who took the kickoff to start the extra frame. What many failed to see was that for all games, the 50/50 split of winners is correct, but not since the kickoffs were moved back. Since teams began kicking from the 30, more than 55% of winning teams took the overtime kickoff. This also may be a result of more accurate kickers and better players on offense, but the fact still remains that the overtime rules favored the team who gets the ball. Thanks to the new rule change, there is a failsafe.

Is it a sure thing that the Vikings would have gotten to Miami had the rules been different? Not at all, but they would have at least had a chance. I think the new rules should support more balanced ends to the games that count, although I believe they should have taken it much further. With such a short season, I think it should have been adopted league wide to prevent cheaper wins than the new rules allow. I also think they should eventually move closer to the way college football does it, to promote equal chances that are not based on a random flip of a coin.

Overall, rule changes are always polarizing, especially in some sports. This particular rule should not affect many games, but when it does, I have a feeling the fans will get exactly what they want.