Michael Oher’s story The Blind Side has become a national sensation, raking in millions at the box office and making the Tuohy family into celebrities. This whirlwind of coverage culminated last night with a Best Picture nomination and a Best Actress win for Sandra Bullock, the actress who played Leigh Anne Tuohy in the film. Having such amazing success in the theatre didn’t just resonate with Oscar voters, as collectors have recognized Oher as a 2009 hobby all-star as well. Even after The Blind Side moves into Hollywood’s back log of great movies, Oher’s career will continue to be a testament to overcoming a difficult life.

I saw The Blind Side when it was first released around Thanksgiving of last year, and even wrote a post for this blog detailing my observations of the film. I could not help but feel great about its message, and even said to my wife that it was an Oscar contender at the time. My predictions came true, and Bullock won her first Academy Award playing a person that brought hope to many people over the last few months. The three subjects of the film were present at the Oscar ceremony Sunday night, and for many of us, it was the first time we got a look at the person that Bullock had so wonderfully represented.

For those of us who watched the draft before the 2009 season, Oher was a prominently featured prospect during the entire telecast. Though he was the last person present in the green room at the end of the first round, he didn’t look a bit disappointed. At the time, we only had what ESPN was commenting on, but now, thanks to the recent success of the movie, we know why he was just happy to be there.

Don’t get me wrong, Oher deserves all the credit he gets from what the movie displayed about his background. He is a great player, and anchored the offensive line of the Ravens during a season where injuries forced him into the starting lineup at left tackle. Though he had played right tackle for a good portion of the games before, he fit right into his role that was chronicled in the movie. He eventually moved back to the right when Jared Gaither returned from his injury, and played every game during the 2009 season and playoffs. After the 2009 campaign was done, he was named to the NFL All Rookie Team, and is primed for a sizable contribution to the Raven’s 2010 Super Bowl hopes.

Oher’s cards initially responded very well to the release of the movie, earning him some of the top values ever for a non-skill position player. As of the release of SP Authentic, his cards have not dropped at all. His SP Authentic rookie auto redemption consistently sells higher than some of the players more prominently featured on their team’s offense, including some that were in the running for Rookie of the Year.

In addition, his Ultimate collection rookie card (one that doesn’t feature an auto) is still among the top selling non-autographed cards of the set, which shouldn’t be surprising. It is one of the first ones to feature a game photo of him in his Ravens garb, and it is one of my favorites out of all of his rookie cards. 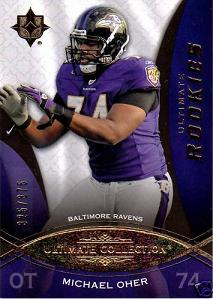 Oher was also featured on some dual autos in SP Signature Edition, which many collectors jumped on as soon as they had the chance. The cards pair him with Ole Miss alum and other offensive line prospects, and are some of the more valuable cards in the set. 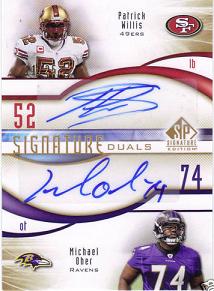 Now, I have been in the hobby for a long time, and I have never seen anything like what Oher brings to the hobby. It’s very rare that a movie subject brings on as much value as The Blind Side did for him, and I don’t expect that will ever go away. I think it’s just as much a result of his exceptional play, as it is the wonderful job done by author Michael Lewis in writing the book, and John Lee Hancock in directing the movie.

It’s tough to say whether or not Oher will continue to live up to expectations set during a great first year, but I will comment that he has shown great determination. Because of his uncanny skills, he shouldn’t have a problem continuing his success, but the NFL is more than just skill. Regardless of how he does in the seasons to come, there will always be a great movie built around a truly amazing story. Because of that fact, collectors will continue to seek out “Big Mike” as an addition to their collection. I know I did not hesitate to add him to my list of players to cheer for, and I suspect that I am not alone.