Sidney Crosby fulfilled his destiny.  At the age of 22 he has done more now then most players hope to accomplish in a career. He has won an Art Ross trophy as the top scorer. He has won a Hart Trophy as the leagues most valuable player. He has captained his team to a Stanley Cup. Now he has scored the Gold medal clinching goal in overtime at the Olympics, elevating himself to the folklore status: this is what happens when you score one of the greatest goals in Canadian International history. The game finished 3-2 for Canada in overtime, but it was a back and forth battle right to the end.  Canada jumped out to an early 1-0 lead on a goal by Jonathan Toews, then Anaheim Duck forward Corey Perry added to the lead just before the halfway point in the game, putting the Canadian squad up 2-0.  At that point, the American team knew that the next goal would be huge, and they were able to get it within a goal at the end of two periods.  The Americans came in waves during a third period that saw them dominate play, and it wasn’t until the last minute with Ryan Miller on the bench when New Jersey Devil (and son of Canadian hockey hero from the 1972 Summit Series J.P) Zach Parise whacked home a loose puck in a scramble to tie the game . . . only to set up Crosby’s heroics in overtime. 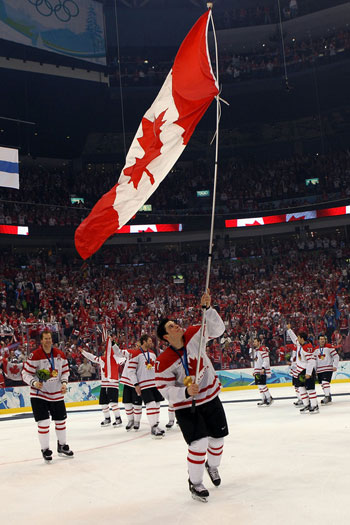 When we take a look at the Olympics and how the games relate to the game of hockey, (and more importantly, how they relate to the world of collecting), there are some clear winners and losers.

Sidney Crosby: Yeah his cards already go for a mint, but I think you will see a bit of a bump in some of his key available rookies, namely his Young Gun. Scores of Canadian fans will probably try and eat them up, making the many American fans who sell them some money along the way.

Crosby didn’t light up the tournament offensively like many predicted he would or could, but what he did do was score the big one. It was almost like it was predestined, from the time that Wayne Gretzky said that this kid had a chance to break some of his records, to being left off of the 2006 Olympic team, through winning the Stanley Cup at such a young age.  It will go down in Canadian history as one of those “Do you remember where you were when . . .” moments. A timeless and classic moment to be sure. 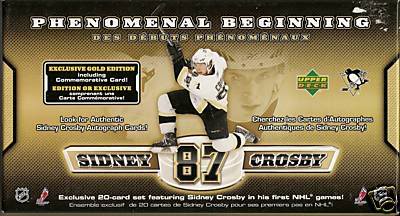 Ryan Miller: For anyone doubting that Ryan Miller’s time has finally arrived, look no further then his play in this tournament and you’ll know he is indeed the real deal. Named the top goaltender as well as the tournament MVP, Miller proved what many of us thought: in order for USA to compete for a medal, Miller will have to stand on his head.  He played fantastic throughout the tournament, outplayed goalies with better career resumes (notably Martin Brodeur in the final game of the Round Robin to give the American team the bye straight into quarterfinals, and then Miikaa Kiprusoff in the semifinals). Without Miller in the net, the American team doesn’t make it to the medal round. I can see an influx in many of Miller’s cards on the horizon.  Rookies, autographs and even game used cards will change hands, as a new American hero has emerged. 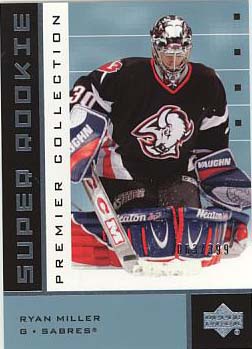 Jonathan Toews: Many people believed that Toews would come in and be the Canadian team’s 13th forward, while others questioned his assignment to the team altogether.  The not yet 22 year old captain of the Chicago Blackhawks proved without a shadow of a doubt that he was born to be great.  After being the Canadian hero in the 2007 World Junior Championships (yeah I am talking about his shootout performance against the Americans, sorry), he also competed in the World Senior Championships that same year and didn’t look out of place playing with men.  He scored 7 points in 9 games there, helping the senior squad to gold there as well. 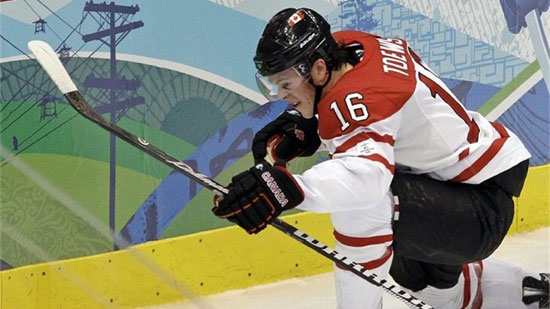 With a resume like that, it shouldn’t come as a surprise that Toews excelled at this tournament (ultimately being named the top forward), but to many it did.  The Hawks captain proved he can do it all.  He could jump into the scoring, play on the top line or drop down and be a shutdown forward, as he proved when he teamed with Rick Nash and Mike Richards in the Russia/Canada quarterfinal matchup to shut down the Russian superstars. A spike in his cards seems to be but a formality at this point, and his place on future Canadian International teams seems to be a lock now as well for the next 10-15 years. 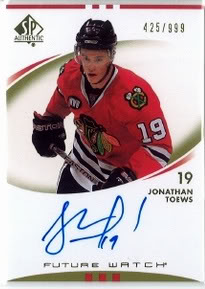 Team USA: If nothing else, this squad proved you can get results as a team.  Yes, they were full of NHL talent, so we knew they would be able to compete.  But what surprised many fans was the way they were built: strong in net, a strong defense that isn’t afraid to take the body, two scoring lines, two shut down lines (not unlike your favorite NHL team is probably built). They showed that they could not just compete, but dominate some of the world’s top teams at any given point. 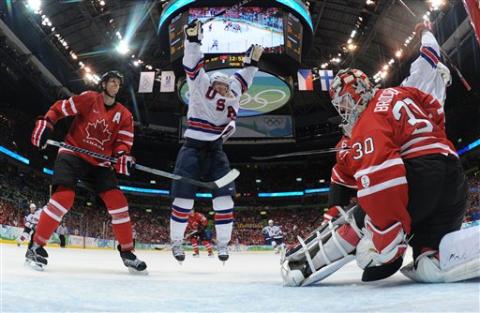 The semifinal game against Finland was perfect example of this.  At the end of the first period, the Americans were up 6-0, having chased a former Vezina Trophy winner by making him allow more goals (4) then he had saves (3).  They showed at times they could dominate the mighty Canadian team by capitalizing on mistakes, and they put the finishing touches on teams when they had the chance.  They never quit, not even in the last minute of the gold medal game, when Zach Parise banged home the tying goal against a sprawling Roberto Luongo.  They came out in the overtime period that reminded me of the Canada/USA World Junior gold medal game just a couple months back when both teams were out to win the game, not lose it, and traded chances.  These Americans were not afraid to win, much less lose.  The only problem is that in a tournament like this, you don’t “win” a silver medal. You lose gold, and your consolation prize is silver.  You could see it in their faces.  It wasn’t what they wanted, they wanted the gold.  It might take some time, but I think they will come to appreciate that silver medal.  As a Canadian writing this, I am proud of how the American team played, what they stood for, and their determination they showed.  This team proved they are still a world power in the game of hockey, and they should be proud of that, because when this tournament started, many thought they were not.

Peter Forsberg: Showed that he still has hands that dazzle on the ice, but also that his foot problems have not yet been figured out.  To say he was slow would be an understatement.  He looked as though he was skating with an anchor tied to his back.  On a positive note, it was an accomplishment for him to be named to the team and play. I wouldn’t say he embarrassed himself, as much as he showed that he is but a shell of his former dominating play that arguably made him the game’s best player at one point.

Evgeni Nabakov: In the quarterfinal game against the Canadians, Nabby laid an egg.  He gave up four goals and was pulled.  He’s one guy who will love getting back to the NHL.  He knows his team will be in the playoffs, and he knows those are seven game series.  He can have a bad game and come back strong; at the Olympics when it is one and done, you don’t get that chance.  He may wear goat horns for a while, but he will be back and will again prove he is one of the games best puck stoppers.

Martin Brodeur: He played in the tight game vs. Switzerland and ended up having to stop all four shootout shots to preserve the win.  He then came back against the Americans in the final round robin game and was clearly not on.  He gave up bad goals, played the puck horribly, and forced the coaching staff to sit the all-time wins and shutouts leader down for the rest of the tournament.  While I am sure it had to be difficult for him to not play, it was the right decision.  On the bench, Brodeur turned out to be another coach, often helping teammates with some of the finer points.  He took it in stride, and like Nabakov, will be eager to get back to NHL hockey and prove he is still among the elite.

In closing, the Olympic hockey tournament had it all.  It had great performances in losing efforts in David vs. Goliath type games.  Look no further than the Swiss goaltender stonewalling the Americans in the quarterfinals, only to eventually succumb to the powerful, most consistent team. The Slovakian team beat the mighty Russians in a shootout, and the Americans beating the home town Canadians in the round robin; both shockers at the time.  Slovakia did it again to medal favorite Sweden in the quarterfinals, only to fall in the semis to Canada. 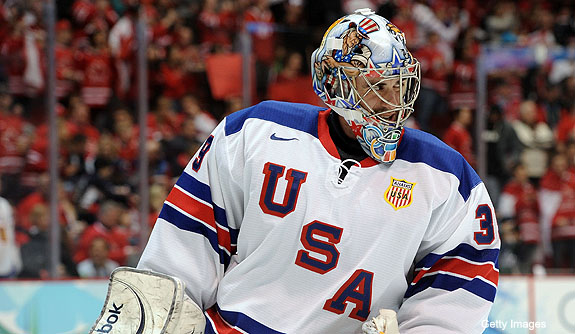 It had great individual performances: Ryan Miller in the American net, and Pavol Demitra showing that he can still put up points, leading the Olympic tournament in scoring. Brian Rafalski put up points like they were going out of style for the American squad off the blue line. I watched a round robin game that not many watched: the Norway/Switzerland game.  What a game that was. The best part of it was that I witnessed the greatest hockey name possibly ever score a hat trick: Tore Vikingstad (you just want to hear him talk about himself in the third person, or maybe that is just me looking too much into a Norwegian name being Vikingstad).

Looking at the games now less then a week after their completion, I remember all of these things, but in the end, when I look back on the 2010 Olympics I will remember a gold medal game that many in North America felt would mean “winning” the Olympics as a whole.  Team Canada and their record of most gold medals as a host nation vs. Team USA and their record medal haul.  In the end, it was Canada who was able to win the game on “the goal”, that will go down in Canadian hockey history as one of the biggest ever scored.

Thanks for the memories.


[…] (I know I wasn’t the only one flipping back and forth between events), the Olympics are over. Canada brought home the gold in both Hockey and Curling, so I’d say it was a success for our friendly neighbors to the […]


[…] When he’s not leading the Canadian team to Olympic Gold, Crosby’s day job is leading the Penguins to Stanley Cup championships in this black and gold jersey. Pretty cool to hold a jersey a guy like that wore on the job. […]