To fess up from the start here, I’m not much of a Jonas Brothers fan. I don’t follow pop music much. But I do consider myself somewhat of a media connoisseur, and it’s hard to ignore that “Jonas” in one form or another is a trending Twitter topic on most days. Their fans are that rabid about the group.

If you click on the image above, it’ll take you to a special promotion we’re running in our online store: get three autographed, authenticated (that means 100% genuine) Jonas Brothers pieces for the price of two! Same goes for the group of items below . . .

Same deal, but with a different set of color prints. And finally . . . 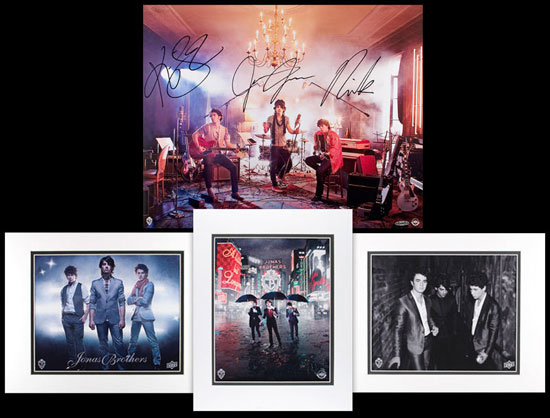 Our third promotion featuring three collectible photos, along with one triple-signed photo.

We have other Jonas Brothers items starting as cheap as $19.99, so click here to check them out!