Although good running backs are typically plentiful at every level of the draft, one or two take the spotlight every year. This year, there isn’t a great crop of prospects, but there are a few players that do look to be elite players coming out of college. At the top of the list is Clemson’s CJ Spiller, who has rumbled his way to the top of the running back class thanks to a great 2009 season with the Tigers. Spiller has the size and speed to be a great pickup in the middle of the first round, maybe even going as high as the top ten. 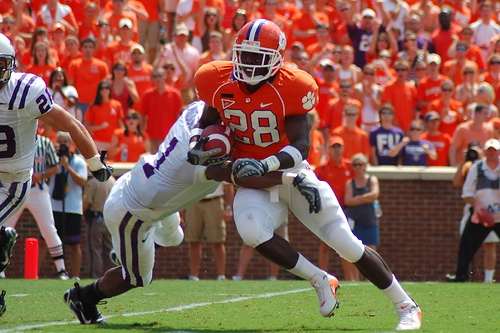 After his 2009 campaign was over, Spiller won a slew of awards and honors to solidify his place in the upcoming draft. Despite only finishing sixth in the Heisman voting, Spiller won ACC Player of the Year, and was voted as an All-American. He continued his good performances at the combine this past February, posting an above average 40-yard dash time (and his 18 reps on the press were very good as well).

As of right now, there are a few teams experts see Spiller going to, with Seattle being the most likely landing zone for him. Seattle has little to nothing in their backfield as we speak, and adding a player like Spiller would definitely improve an offense that struggled throughout 2009. Cleveland is also a team that needs help in their backfield, even though Harrison had a few great games last year. After trading Quinn for Peyton Hillis, Spiller will have better blocking and a possibility to shine behind newly acquired Jake Delhomme. If he falls out of the top fifteen, expect Houston to take a chance on him, as Steve Slaton has been shown to have a few problems over the last season. I would say that there are too many teams to pass up a talent like Spiller before Houston at 20, but the draft is ripe with great defensive talent that could steal most of the first round picks.

Basically, when you are at the top of the running back class, it may actually be better to drop as low in the first round as possible. Players drafted to better teams usually get the benefit of better offensive lines, and better quarterbacks to draw the attention away (much like Beanie Wells or Knowshon Moreno in 2009).

Regardless of where Spiller ends up, collectors will jump all over him. Ever since Adrian Peterson exploded in 2007, the rookie lovers of the NFL collecting contingency scoop up every card they can find of just about all the running backs in the draft class. The reason? Backs are usually the most focused upon rookies at the earliest moments, sometimes starting from day one. They also have a less complicated position to master, unlike quarterbacks and receivers. Spiller is a great and widely known player, so his values should be near the top of the initial prices.

Upper Deck will make players like Sam Bradford a focus in the beginning of 2010, along with many of the other elite prospects for upcoming releases. 2010 Sweet Spot Football will be back with a new style and a new face, but will still feature elements collectors have loved for years. It will feature players like Bradford, Ndamukong Suh, Colt McCoy and others, on hard signed custom helmet cards. Sweet Spot will also debut players like Super Bowl MVP Drew Brees in his Purdue garb, and Hall of Famer Dan Marino in his Pittsburgh uniform for all the collectors out there who follow their favorite schools. 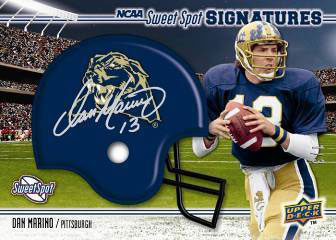 Check back here at UpperDeckBlog.com for more draft profiles leading up to the 2010 NFL Draft on April 22!