Recently, a volunteer doctor from the United States was approached by a young man in Haiti. The look in his eyes was familiar to the doctor; the look of untold pain and suffering mixed in with the struggle of coming to grips with what had happened to his home. There was nothing wrong with the man physically, but he was still looking for comfort.

“Do people know what happened to us?”

Referring to the rest of the world, he wanted to know if anyone out there was aware of the pain in Haiti. The doctor assured him television stations were covering the devastation around the clock. He told him the rest of the world was watching, praying, helping and hoping. 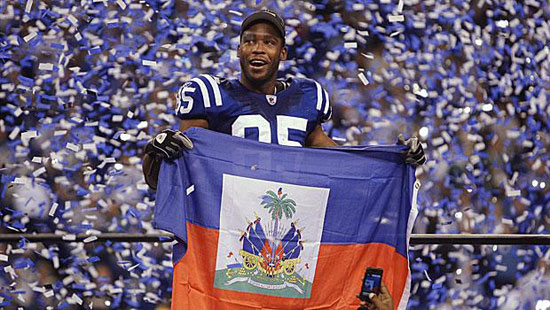 After the AFC Championship Game, second year player Pierre Garcon, whose family is from Haiti, unveiled his home country’s flag in front of the crowd. The week leading up to the game could have turned into an emotional whirlwind for the young player, as he tried to continue establishing himself in the Manning Offense while his mind and heart were continually being pulled toward his family and friends who still live in Haiti. Instead of being derailed, he used the tragedy as a motivating and driving force in his preparation.

At the end of the day it all paid off. Garcon finished the game with 11 catches for 151 yards and a touchdown setting a new AFC Title record.  Mission accomplished. He did it for his team, his family and reminded everyone, he did it for Haiti.

In just one week, Pierre Garcon and the Indianapolis Colts will take the field for the last time this season to cap off what has been an amazing run. Questions were raised from Week One about injuries to veteran players and whether or not rookies, or almost rookies, Collie and Garcon could make immediate contributions. Fans especially wondered why the coach decided to pull starters in what could have been a perfect season. Analysts have been wondering aloud all year about whether or not the Colts could beat the Saints. All questions have been answered. All doubts have been laid to rest. Only one real test remains.

There would have been a certain level of comfort for Colts fans if Brett Favre had won. The poor guy got pummeled for four quarters, and at the ripe age of 40 would not have been in tiptop shape for Freeney and the rest of the Colts defense. Handing over the trophy would have been all but a sure thing. Instead, the Hall of Fame quarterback decided to run one way and throw the other. It cost him a trip to Miami, and made it that much harder for the Colts to be crowned champions.

So here we are, left with the two best teams in the league, the way championships are supposed to be determined. Who would have thought?

Peyton Manning is one of the best quarterbacks of all time. Put all of your emotional arguments aside and look at the numbers. There is no one who can move the ball down the field with more efficiency. Once he gets a couple of good looks at the defense, he picks them apart with an aerial assault straight out of the Department of Defense training manuals. It is no longer a question of whether or not he can find Reggie Wayne down field, but which of his receiving threats to hit. There is no doubt he will put on another great show, just like he always does.

Many will argue the Saints have done a better job at closing out games, and Drew Brees can deliver just as well as Peyton. For much of the season those statements could be made with some confidence, but then there was the NFC Title game. There were a number of times when Drew’s passes came off his fingers with a certain wobble and receivers couldn’t bring them down. There wasn’t the usual crispness in his throw. Without the Saints defense and the Vikings coughing up the ball so many times we would be watching purple helmets on Sunday instead of gold. Should Saints fans worry, or did Drew just have an off day? Maybe he got the playoff jitters out of him that day, or maybe he subconsciously fears what is coming next.

Regardless of the final score on Sunday there is one thing we all need to remember.

As we sit down to enjoy the beer, the junk food, the friends and the phenomenon that is the biggest game in football, much of Haiti will still be in ruins. Children will still need homes, families will be without food and bodies will continue to be found.

On Sunday take a moment to remember those in Haiti. Let them know we are watching and praying.

Click here to make a donation to the American Red Cross’ efforts to provide relief to Haiti.


Great post. It is good to see these pro athletes using the stage to help with this cause.