Not All Draft Picks are Created Equal

Most of you know the bigger Cinderella stories of the NFL and NBA drafts. Tom Brady, a sixth-round draft pick, won three Super Bowls (twice as MVP of the game). Ben Wallace was underdrafted, but became a four-time All-Star and NBA champion. They, and many others had success on the field and the court despite being highly looked over, and their stories are fondly remembered. Often, however, we tend to forget those players who excelled at the college level, were drafted high, and then never seemed to make any noise in the pros. Remember these guys?

Ryan Leaf, a former Washington State University quarterback, is arguably the biggest draft bust in the history of the National Football League. He was selected by the San Diego Chargers, one pick behind four-time MVP Peyton Manning. Leaf, in his short NFL career, threw a total of 14 touchdown passes against 36 interceptions. Expected to turn around the Chargers’ franchise, he only won four games with them in 18 total tries before being released. He retired in 2002 at the age of 26. Interestingly, many people believed the Colts should have taken Leaf as the number one pick in the draft ahead of Peyton Manning. 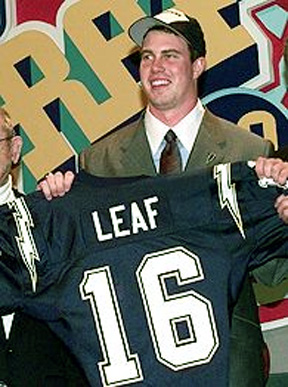 In 2006, Ryan Leaf joined the West Texas A&M football staff as the quarterbacks coach. He also became the school’s golf coach in 2007. After two years with the football program he resigned; in May of 2009 he was indicted on burglary and controlled substances charges in Texas. Leaf has admitted being unprepared for the NFL when he was drafted in 1998, claiming that once the game of football became a job, it lost its luster to him.

Wow, 1998 was not a good year for California teams to draft. Michael Olowokandi, a Nigerian-British center, nicknamed “The Kandi Man,” was selected as the first overall pick in the ’98 draft by the Los Angeles Clippers. The Clippers passed up stars like Mike Bibby, Antawn Jamison, Vince Carter, Dirk Nowitzki, and Paul Pierce with that pick. Even though he played ten years in the NBA, he never lived up to expectations. He played 500 games in the league, averaging only 8.3 points per game (and even less rebounds).

Olowokandi also struggled with injuries. In 2003, his last year with the Clippers, he sustained a hernia and knee injury and was signed by the Minnesota Timberwolves at less than market value. For the remainder of his career, each offseason he’d receive rehabilitation treatment but nothing seemed to do the trick. The fact that he was drafted over many other basketball superstars, delivering an underwhelming career marred by injuries, made Michael Olowokandi one of the biggest NBA draft busts ever.

After getting surgery on both knees in 2001 and 2002, Jason White led the Oklahoma Sooners to the national championship game, earning a Heisman Trophy along the way in 2003. White lit up the score board for the Sooners that year, throwing 40 touchdowns against just 8 interceptions. He even beat now-NFL stars Larry Fitzgerald and Eli Manning for his Heisman Trophy. The next year, White again led his team to the title game, finishing third in Heisman voting. He lost both national championship games he played in, but finished his collegiate career as Oklahoma University’s all-time leader in passing yards and touchdowns. 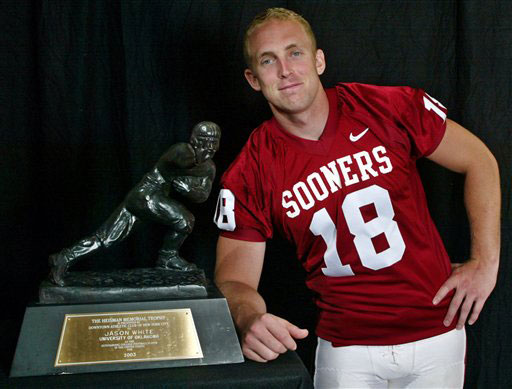 Despite all his success in college ball, he was undrafted in 2005 and only tried out for one team. He later signed a deal with the Tennessee Titans, but decided to retire soon after.

Jason White currently owns and operates a memorabilia store that sells OU and OSU merchandise, and an Athlete’s Foot shoe store. Before that, he worked with insurance agent Steve Owens, another former Oklahoma University Heisman Trophy winner. In 2007, a bronze statue of White, commemorating his Heisman victory, was dedicated on the University of Oklahoma campus.

Bobby Hurley was a star on the rise at St. Anthony High School, and later Duke University. He led his high school to a 32-0 record in his senior year, earning the school the number one ranking in the country. He then went to Duke, where he would lead his team to national championship titles in 1991 and 1992. Hurley did it all, but excelled at passing the ball. He is still the NCAA leader with over 1,000 career assists. Hurley’s Duke jersey number was retired soon after he left the school. 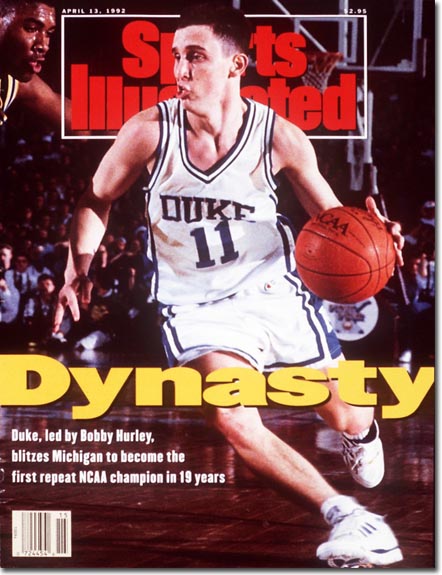 He ended up being drafted 7th overall in the 1993 NBA Draft by the Sacramento Kings, but he never took off in the NBA. After just 19 games, he got into a bad car accident and suffered life-threatening injuries. Luckily, he was able to recover and came back the next season. After that accident, however, he never had a season where he averaged more than 4.2 points per game or 3.3 assists per game. Hurley only played in the NBA until 1998.

After retiring from the NBA, Bobby Hurley went on to become a thoroughbred racehorse owner and breeder. A fan of horse racing, he owned Songandaprayer who won the 2001 Fountain of Youth Stakes. Just last month, in December 2009, he was sued by PNC Bank for defaulting on the $1 million loan that was used to purchase Songandaprayer. He was also hired as a scout by the Philadelphia 76ers in 2003 and has expressed aspirations to become a coach.

Heath Shuler drew crowds as soon as he was a sophomore in high school. He led his team to three straight state championships, and signed an athletic scholarship to the University of Tennessee. He received national attention as the starting quarterback at Tennessee and finished second in the Heisman Trophy voting in 1993. Shuler was later selected by the Washington Redskins third overall in the 1994 NFL Draft.

Like many rookies, he struggled off the bat. In his first year with the ‘Skins he went 1-7 and threw more interceptions than touchdowns. Shuler was benched during his third year and replaced by Gus Frerotte, who ended up making it to the Pro Bowl. After their success with Frerotte in the backfield, the team dealt Shuler to New Orleans after the 1996 season. In his short stay with the Saints he threw 14 interceptions and only two touchdowns; his season ended early after a serious foot injury. After the 1997 season, he signed a deal with the Oakland Raiders where he re-injured his foot in training camp and decided to retire.

Heath Shuler is currently a businessman and a politician. He is a Democrat in the United States House of Representatives, representing North Carolina’s 11th congressional district. Shuler is also a former real estate professional and his company is one of the largest independent firms in eastern Tennessee.

As you can see, there is no such thing as a surefire prospect when it comes to sports. Some players are more suited to succeed in the professional spotlight. It seems that for every bust, there is a late pick no-name who blossoms unexpectedly. As the old proverb states, “Don’t count your chickens before they hatch.” In the end, you never know what will happen in the wonderful world of sports.